Don't listen to everything you hear! Just listen to me instead. We're going to get into what you should and shouldn't be believing.

Situation: You're with a buddy late one night and you're incurably hungry. We won't get into why but (thanks to a 30 rack) you can't drive anywhere to pick up something, and eating toast with old peanut butter sounds awful. So you order pizza from Dominos, because your friend says "bro it's the best."

It's not really the best, it's fine. If it were just any other pizza you would be pleased with your experience, but it was so hyped up that you feel lied to and your night basically becomes miserable.

Your "bro" are those sports radio gurus/general public that reads a little line by Matthew Berry and other fantasy football experts and takes it as the gospel, hyping it and hyping it until they're taking Colin Kaepernick over Aaron Rodgers in the second round (something I actually saw happen this year).

I can't stand to see this happen, so starting this week I'll be releasing a "misconceptions corrected" piece where I take a look at a few "sexy" theories and see if they hold any water.  This week I take a look more at general fantasy topics heading into the season. Next week onwards I'll pay a little more attention to specific match ups, and I'll be able to speak about player trends with a full week of regular season data in my back pocket.

Theory 1: Reggie Bush has little to no fantasy value

This has been an interesting one actually and it has more to do with his backfield mate Joique Bell than anything else.

It's true the Lions brass opted to throw a good deal of guaranteed money towards Bell this offseason, more than they gave to Bush a year ago. But take a step back. This is not a sign of changing tides.

Joique Bell didn't just show up out of thin air. He was extremely productive alongside Bush last season, with the duo combining for 149 targets in the receiving game. Bush had more yards on the ground with Bell crossing the pylon more, but, all combined, both of the backs finished amongst the top 20 fantasy wise at seasons' end.

While Joique Bell certainly is a solid player, that should not take away from the value of Reggie Bush as some would have you believe. New coach Jim Caldwell brings an offense that, through the preseason, looks faster even to the average fan, getting guys with speed in space and asking them to make plays. That should work perfectly for a guy with Bush's skill set, who had a good preseason, highlighted by an impressive 86 yard touchdown against the Jaguars.

Bush should get the lion's share (was a play-on words don't freak out) of the receiving duty as the more explosive back while Bell will handle short yardage situations and probably score the majority of the rushing touchdowns.

Both have been successful together and will be successful in the system this year, meaning Bush still does have a good deal of fantasy value, especially in PPR leagues.

The days of teams using a single running back in all situations are over. Even Toby Gerhart got playing time behind Adrian Peterson. Open your eyes it's 2014! Embrace it.

Conclusion: Don't buy it. Reggie will still get a good deal of work in the receiving game especially, and with defenses paying attention to Megatron he should find himself with the ball in space racking up points in your RB2/Flex spot.

Theory 2: Trent Richardson is worth drafting and primed for a "get it together year" 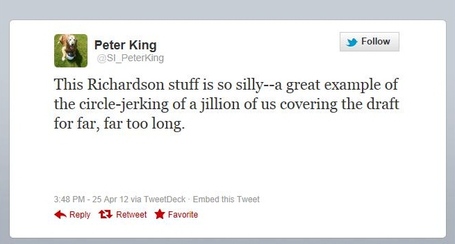 Peter King didn't mean the fantasy football draft for this year but I do. You realize Trent Richardson's average ADP puts him in the top 80 in fantasy football, and top 25 or so of all running backs.

Am I missing something? Before we even get to the Colts' abysmal offensive line (spoiler alert: they're abysmal) we should simply look at the player himself.

I'm sorry to the good folks of Alabama but your boy just isn't any good.

He has under 700 yards total during his professional career. His numbers make Bilal Powell look like Jim Brown.

A trade last year during week three from the gulag that usually is (but currently not, hint: Ben Tate is good at footballing!) Cleveland's backfield to Indianapolis was supposed to be a positive change of scenery for him, but he netted a whopping 265 yards over the course of the season with the Blue and White.

I could go on, but why. He's bad at football. He won't be good this year. Stop thinking he's going to have a comeback year. He won't. Any time spent writing about him is a waste of internet space.

Conclusion: Don't buy it one bit whatsoever. He's fundamentally a subpar player. Stop drafting him you bafoons. If you're feeling emotional and want to root for an underdog go watch Rudy for the 11th time. This is fantasy football. It's serious business. If you have him on your roster go re-evaluate your life decisions completely.

Theory 3: Josh Gordon will sell the most cars in the greater Cleveland area

Theory 3a: Aaron Dobson will develop into a deep threat for Tom Brady

This one I actually like. Kenbrell Thompson had a chance to become Tom Brady's new Randy Moss last year and entered the season extremely hyped but fell a little short of expectations. He's still on the roster but for now will spend his time backing up Dobson as the Patriots "X" receiver.

Coming off foot surgery the second year man out of Marshall was only able to participate in the final preseason matchup against the Giants last week, but his performance was encouraging.

He was targeted nine times, albeit by backup Jimmy Garoppolo, and caught a 33-yard touchdown pass for the team's only touchdown of the night.

Bill Belichik will never say anything, but that Thursday Nighter definitely left fans with the feel that Aaron Dobson is going to be a big part of the Patriots plan on offense.

Dobson might not develop if he had an Alex Smith caliber quarterback, but with Brady back there all bets are off.

He's probably not on your roster right now, but keep an eye on him and don't be afraid to clear a bench spot for him now. The downside is you don't have your 5th string running back for the first two weeks of the season. The upside is Dobson goes off as Brady's new toy and has a WR1 type of year.

Conclusion: Buy the hype for now. Low risk high reward player, pick him up and never look back (hopefully)

So that's it for week 1. Be sure to check out or rankings, and next week we'll get into some match ups that you're overly worried about but shouldn't be and things of that nature!