The Rays added Kevin Kiermaier to their roster for game 163 on Monday, and it's possible that he could be on the playoff roster as well, despite playing in just that game. Where did he come from, and what could he be for fantasy owners?

To say that it's been an unusual path to the Majors for Kevin Kiermaier might be underselling it just a bit. Add in that he is a prospect who has not been ranked by Baseball America in either of the previous top 30 lists for the Rays, and yet, the former 31st round draft pick was added to the Rays' roster for game 163 on Monday. What does his fantasy future look like, and could he make the Opening Day roster for the team next year?

Kiermaier was drafted by the Rays in the 31st round of the 2010 amateur draft, and signed for a bonus of $75,000. While that amounted to a large bonus given his draft position, it still ranked low in the scheme of the draft as a whole. He signed fast enough to get into 57 games with the Rays' Appy league affiliate in Princeton, hitting a solid .303/.380/.431 with 17 extra base hits and 17 stolen bases in 22 attempts. BA did rank him near the bottom of their top 30 list after that season, although at #26.

The Rays sent him for a full season assignment in 2011, sending him to Bowling Green in the Midwest League. The performance dropped off, as he hit .241/.316/.338 with 23 extra base hits and 27 stolen bases in 120 games. BA rated him as the best defensive outfielder in the Rays' system that year, but dropped him off the Rays' top 30 list. He was moved up to High-A Charlotte for the 2012 season, but appeared in a total of 63 games due in part to hand injuries. To say that he'd probably been written off by nearly all prospect followers would probably have been an understatement, given the outfielders already in the system ahead of him.

This year has been a substantial breakout for Kiermaier, as he hit .307/.370/.434 with 28 extra base hits and went 14 for 25 in stolen base attempts at AA Montgomery in 97 games. The organization moved him up to AAA Durham, where he hit .263/.338/.423 with 14 extra base hits and 7 steals in 8 attempts over 39 games. The team added him to the 40-man roster for the last game of the year, but was likely going to need to protect him from the rule 5 draft this offseason anyway. 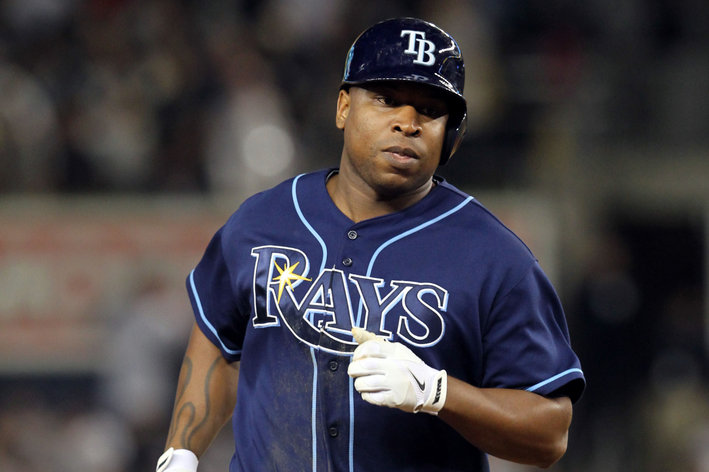 Could Kevin Kiermaier end up starting in a playoff game before he starts in a regular season one? DRays' Bay takes a look at who could be on the 25-man roster for tonight's game.

Kiermaier's defense may be his calling card at this point, as he played center field exclusively in the minors, to the point that one of the Rays' top draft picks a couple years ago (Mikie Mahtook) was shifted to a corner outfield spot a bit earlier than was expected. Reports rave about Kiermaier's makeup and specifically his baseball instincts, He isn't expected to hit for a lot of power, but should provide value to owners where the extra base hit categories (2B, 3B, TB, SLG) are played in addition to batting average. He has excellent speed, and is anticipated to be a base stealing threat, but more in the mold of a 20-25 stolen base threat than a 40-50 possibility. He will also have value in leagues where walks and OBP matter, as he has shown consistently good walk rates and solid contact rates.

Kiermaier's value may not be as apparent to standard 5x5 leagues, but he is a very interesting player in both different formats and depths of league. To me, he stands out as a potential solid contributor for both AL-only leagues and deeper (16+ team) mixed leagues. A lot of his value provided will also come in leagues where additional categories like OBP and total bases are played, as well as leagues where outfield positions (LF, CF, RF) are played instead of just the standard OF spot.

The team doesn't necessarily have an opening for Kiermaier to step into for the 2014 season, as Wil Myers, Desmond Jennings, and Matt Joyce all look likely to be in the starting outfield spots. That said, Joyce will be arbitration eligible for the first time this offseason, and it wouldn't surprise me if the Rays tried to trade him to help reduce the cost given his less than stellar performance this year. Kiermaier seems to me like a sneaky stash in deeper formats, and could even be eligible for the minor league draft in some leagues given that he does not have a plate appearance in the Majors yet. He's likely to have more value to his real life team than most fantasy owners, but don't let that keep you from taking a look at him.

You can follow me on Twitter @jasonsbaseball. For more on Kiermaier and the Rays, check out SBNation's DRays Bay.