Is Danny Duffy Ready To Make The Fantasy Leap?

Share All sharing options for: Is Danny Duffy Ready To Make The Fantasy Leap?

Last year, Royals starter Danny Duffy struggled through his rookie season. Called up in May, he made 20 starts and finished with a 5.64 ERA and 1.61 WHIP. With a 4.53 xFIP, maybe he was a little unlucky. Yet he was generous with the free passes (a 4.4 BB/9) and with 15 home runs in 105 innings, he had a difficult time keeping the ball in the yard. Obviously, there are exceptions, but rookie seasons for starting pitchers can be rough as they adjust to the elevated level of competition, and I’ve found it’s generally a good rule to avoid them for this very reason.

Sometimes the second season is when it clicks. When the starting pitcher has taken the best shots the league has to offer, gone away for a winter, made adjustments and figured out how compete at the highest level the game has to offer. Of course, it’s never easy to identify those young starters who are primed for a breakout.

Is this the year for Duffy? Read on...

Last season, Duffy was not pitching ahead of batters enough to be effective. He registered a first strike on just 52 percent of all batters, compared to the league average of 59 percent. On the occasions he did get ahead of hitters, he had difficulty putting them away. This led to inflated walk rates and an elevated pitch count that prevented him from pitching deep into games. In his 20 starts, Duffy averaged 98 pitches per start, but only lasted 5.1 innings per start. This alone kept him from being any kind of fantasy value, even in deep leagues.

While the percentage of first strikes thrown was a problem for Duffy, there was another culprit to his less than inspiring season. In 2011, when he had batters down to their final strike, he ultimately walked 20 of them and allowed a slash line of .263/.324/.452. For comparison, the league batted .185/.252/.281 when they had two strikes against them. He whiffed 87 batters, which works out to a 35 percent rate in that situation.

This season, Duffy has shown marked improvement. (Small Sample Size Alert: He’s made just two starts.) So far, the young left-hander is limiting the opposition to a line of .167/.167/.267 when there were two strikes against them. He’s also struck out a total of 15 batters which works out to a tidy 50 percent rate when hitters are down to their final strike.

He’s also become a bit more economical when it comes to his pitches. In both his starts, he’s thrown 103 and 106 pitches respectively while going six and 6.2 innings. He’s throwing just a handful more pitches per start, but is going a full inning deeper into games. It’s a small change, but if he keeps it up that small change will make a world of difference to his fantasy value.

His first start came against the junior varsity - I mean Oakland A’s - where he twirled six, one-hit innings in a monsoon. The A’s batters are allergic to the baseball, so that start by Duffy was dismissed by some. His last start came on Monday against the Detroit Tigers - a team with a fearsome heart of the order that can put some crooked numbers up on the board. In that start, he gave up seven hits - two of which were home runs. The first home run was on a 3-1 pitch to Austin Jackson, the game’s first batter. The second home run was on a belt-high fastball to Brandon Inge. Both were mistakes. Those kind of pitches will still happen on occasion for a young starter. The good news is, in the first two starts in 2012, Duffy has cut down the total number of mistakes.

Finally, there is his velocity. Last season, Duffy compounded his difficulties by failing to adequately pace himself. He fired all his bullets in the first inning and had nothing left in the chamber for later in the game. He kind of did the same thing in his start on Monday, but had some extra in the tank for his final few pitches. From Brooks Baseball, here is Duffy's velocity chart from that start. 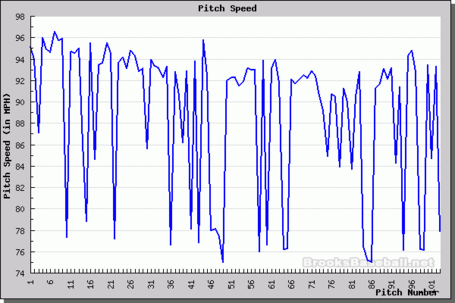 Duffy isn’t a Justin Verlander for sure (who finished off his last batter on pitch 131 with his second fastest fastball of the evening) but he does show promising signs that he’s going to be able to harness his velocity.

Duffy is available 95 percent of ESPN leagues and didn’t even garner an ADP from Mock Draft Central. In a deep league, he’s worth a flier. In a mixed league where there’s plenty of pitching on the waiver wire, he’s worth keeping an eye on and maybe picking up for a spot start or two. And if you’re in a keeper league, hang on… He’s going to be good.