After the Bears blew out the Buccaneers back in Week 4—a game in which Tarik Cohen out-touched Jordan Howard 20 to 11—myself, along with many other Howard owners, started to panic. Had Howard just been replaced by Cohen as the Bears’ lead back? Were we all now going to have to desperately attack the waiver wire hoping beyond hope that Cohen would not only still be available but we would be those lucky enough as to land him?

I was all ready to jump off the Howard bus until I read this quote from Bears’ head coach Matt Nagy following that Week 4 game:

Nagy went on to say that the reason Cohen was so heavily featured was because he liked the matchup advantage he gave the Bears against Tampa. That’s fair. Anyone who can remotely catch the football is a matchup advantage against this Buccaneers’ defense. It makes sense that Nagy would build the game plan around Chicago’s more dynamic pass catching back.

So, I bought in. I told myself that this usage discrepancy was just a fluke and purely matchup based. After all, Howard was averaging 21 touches per game heading into Week 4, compared to Cohen’s messly seven. Howard was going to return to feature back status in Week 6 (the Bears had a Week 5 bye) against a very favorable Dolphins matchup, who’d just given up a combined 278 yards and two touchdowns to the Patriots and Bengals. As a Jordan Howard owner, I had convinced myself everything was going to be alright.

Then Sunday’s game happened and we all know how that went. Cohen again put up big fantasy numbers while Howard struggled. Again, Howard owners were left wondering what do with the Bears’ backfield.

Cohen’s two big performances (Week 4 and Week 6) have primarily come through the air, recording seven catches and at least 90 receiving yards in each of those games. One of the reasons I feel comfortable treating Cohen as a wide receiver is because he’s not just running routes out of the backfield. The past two games, Nagy has had Cohen lineup all around the formation, including in the slot and even a couple of times on the outside. 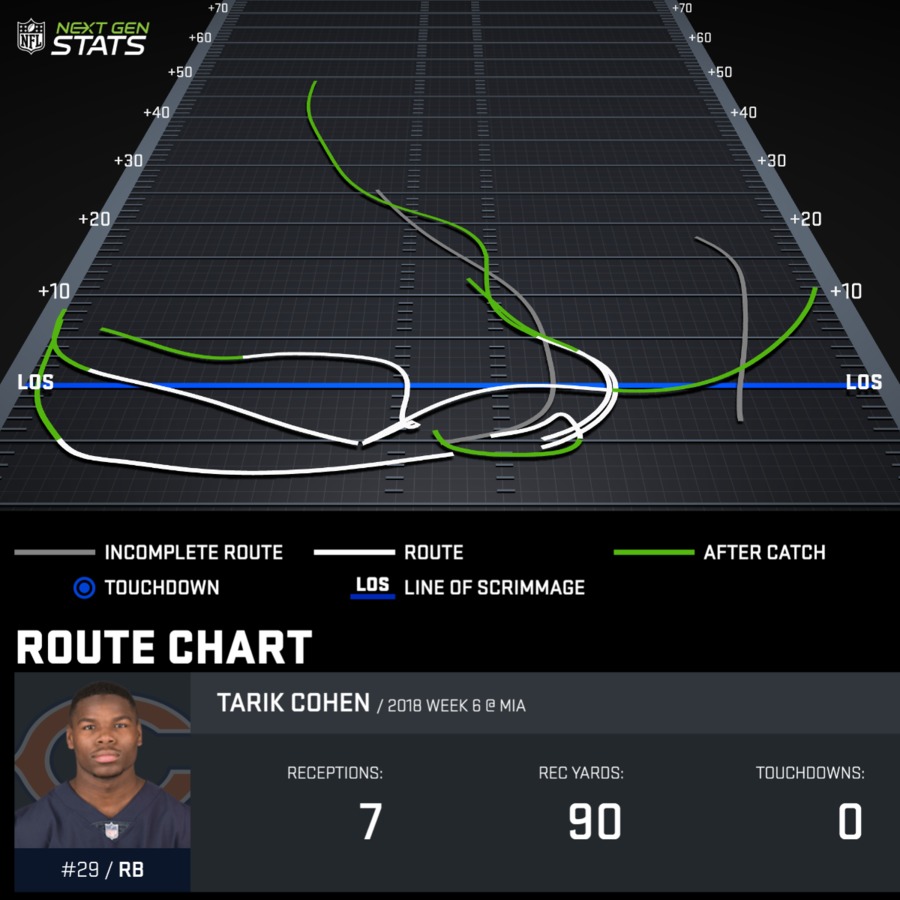 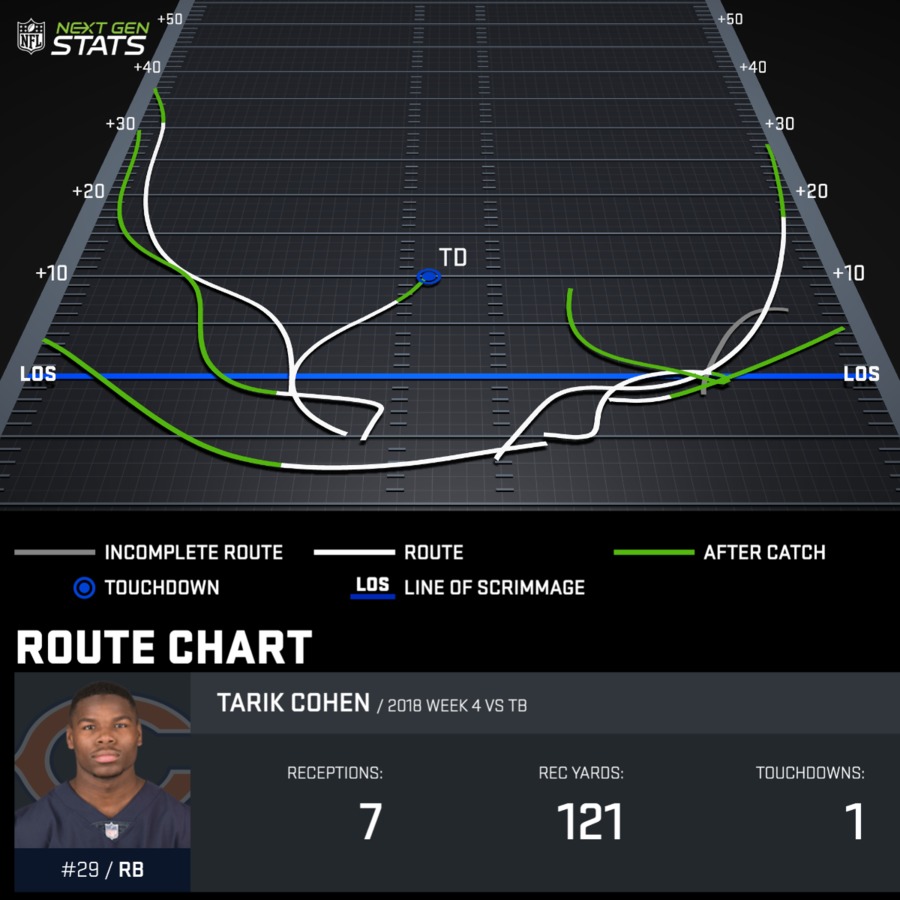 Cohen’s involvement in the passing game isn’t likely to go anywhere either. It’s no coincidence that his flourishing role in the Bears’ air attack as directly coincided with Mitchell Trubisky playing his best football. Prior to Week 4, Trubisky was averaging a 68.5 completion percentage, 197 yards, roughly a touchdown (0.7), and one interception per game and had had only one 300 plus passing yard performance in his career. Since then, he’s averaging a 71.9 completion percentage, 335 yards, four touchdowns (4.5 really) and one interception per game (1.5 really). Trubisky is at his best when Cohen is a vital part of the passing game.

This isn’t surprising as this has become one of the biggest trends in the NFL. Everyone is looking for their hyper-athletic, offensive weapon that is a threat to take any ball he touches to the house and the Bears have found there's.

What about Jordan Howard?

When you look at Howard’s production after “removing” Cohen from the backfield, you realize that his struggles don’t come from losing touches to Cohen, but the simple fact that he just hasn’t been good this season.

His game against the Dolphins was exactly what we’ve seen from Howard so far. He carried the ball 14 times for 69 yards which fits right into the 15 carries, 54 yards per game he’s been averaging so far. (The reason he didn’t look good on the fantasy line was because he had a costly fumble by the goal line. That part’s not so great.)

Sadly, I don’t know how much better he’s going to look this season. Howard is in the bottom 10 of running backs (per Football Outsiders’ DVOA metric) and it’s clear he isn’t the best back for Nagy’s new offense. What Howard excels at is hitting the hole and running down hill, something that worked tremendously in John Fox’s antiquated offense. However in Nagy’s, when Howard is on the field, defenses know what’s coming and as such stack the box and sell out on the run. This appears on the stat sheet as three out of his five games, Howard has averaged less than three yards per carry.

If you’re a Howard owner like myself and need a positive narrative to spin, here’s the best I can give you: he leads the Bears in carries from 20 and 10 yards out by a wide margin. When Nagy runs the ball inside the red zone—which granted is not all that often—it’s going in Howard’s hands. So let’s hope the touchdowns are on their way.

GET TARIK COHEN WHEREVER YOU CAN!

His role in the passing game is not a fluke and he’s going to feast again this week against a Patriots defense that just gave up five catches and 105 yards to Kareem Hunt. He’s been Trubisky’s go-to-guy these last two weeks and I don’t see that stopping anytime soon.

Jordan Howard owners, I could preach patience and tell you that Howard’s finished a top 10 running back in each of the past two years in fantasy but we all know those were different times. I wouldn’t blame you if you wanted to move on from him. He hasn’t shown me anything that brings me supreme confidence that he’ll magically get his shit together and return to top fantasy status.