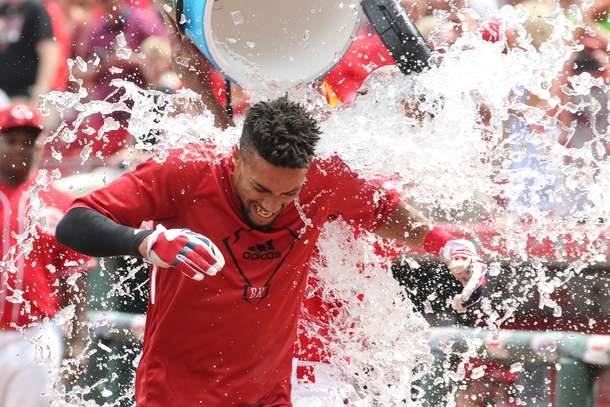 As we head into the second half of the fantasy baseball season, owners look to evaluate their teams in the standings. In doing so, they determine the categories they are dominating and the ones they need major help in. From there, they are able to make trades and add free agents to give them the best chance at gaining ground or remaining on top. With that in mind, I thought it would be helpful to look at several players who can assist owners. The catch, they only excel in one category! These are players owners will be looking to acquire (or get rid of) in the second half of the season in order to make a push at certain categories. Whether that is stolen bases, homeruns, strikeouts, or saves, there is always certain categories owners will need as the season progresses. Sacrifices must be made. These players have very little, if any, extra value other than the category they excel in. Here’s a look at 15 hitters and 12 pitchers who excel in one category.

Billy Hamilton is by far the biggest one category player in fantasy this season. His 27 stolen bases add 5.52 points of value. The rest of his stats add up to a value of -0.50. Travis Jankowski has become a huge value to those needing stolen bases, especially in NL Only leagues. He has 16 SB on the year, but 11 of those have come since he began starting regularly for the Padres back on June 16th. Jacoby Ellsbury appears on this list as the only speedster who still has positive value without steals. The reason for that, he has under 1.00 value in every category other than SB. This means he adds little value despite not necessarily hurting his owners (other than not living up to his 92.4 ADP).

It was a bit more difficult to find players who value is tied almost entirely to power. The reason, 4 of the 5 hitting categories increase when a homerun is hit. Guys with a high HR total usually have decent run and RBI numbers. Chris Carter is as close to the Billy Hamilton of power fantasy owners will see this season. His 22 HR and 52 RBI are very helpful but his .224 AVG and 0 SB hurt his owners a great deal. He has only 0.57 points of value without his best stat (HR). Giancarlo Stanton has been a major letdown this season. His owners are hoping to see more of what he has done in the past 30 games (.309AVG, 8HR, 23RBI). Troy Tulowitzki, another fantasy bust, has produced poor number outside of his HR and RBI totals. Injury hasn’t helped Tulo either.

Interesting list, but here are a few players who are almost all batting average and nothing else. All are batting over .318 but only Ichiro’s 8 SB achieve over 1.00 points of Player Rater value. Need some players who will help you in batting average… these are your guys, but don’t expect anything else.

Owning any of these pitchers come with a tremendous amount of risk. Chasing strikeouts can seriously damage ERA & WHIP. If you are willing to take the risk, or you are already too far behind in ERA & WHIP, then target these strikeout artists. Chris Archer has been a puzzling case for fantasy owners this season. Coming off of a season where he finished 5th in Cy Young voting, many thought he would take the next step. Unfortunately, that has been a step backwards. His walk rate is up a batter per 9, his HR rate has doubled, and his ERA has increased to 4.68. I can’t even find a bright side to his season other than his strikeouts. He has been consistently bad and owners are left stuck with him in hopes he turns it around. Until then, enjoy the Ks. Michael Pineda and Drew Smyly have pitched very poorly this season. For owners needing strikeouts though, they offer a 10.7K/9 and 9.5K/9 respectively. Be careful of their +5.50 ERA though.

For a more detailed look at this, check out my Pure Reliever Rankings. There, I discuss certain closers whose value is tied almost entirely to saves. If you look at that list, you’ll see some familiar names. David Robertson is actually negatively impacting fantasy owners without his 23 saves. His 5.1 BB/9 has a lot to do with this. Ryan Madson and Jonathan Papelbon both have little value past their save totals. Their low strikeout totals don’t help their case. Brad Ziegler, who is no longer in a closer role, loses essentially all his value without saves. He can easily be dropped in almost all formats.

(Stats are through July 18th)

This data is not only for those owners who needed a boost in a certain category, it can also be used by owners of these players. If you have stolen bases or saves fairly locked up, you can feel free to part with one of these players who are offering little value elsewhere. Just be sure you aren’t giving them away to your closest competition. Best of luck!