What do we do with the hurt players, Part 2? (AL Edition)

With all the hurt guys, it's time to figure out who's worth dropping and who you need to hold on to.

Share All sharing options for: What do we do with the hurt players, Part 2? (AL Edition)

I've run into a problem of late in my fantasy leagues. My way-too-dang-many-it's-like-a-drug-and-when-people-invite-me-I-can't-say-no fantasy leagues. I am well aware that I am not alone in this problem, which is why I now choose to write about it. So nice to have a platform.

Anyway, I'm going to illustrate my problem with some screenshots from four of my teams: 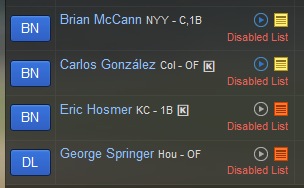 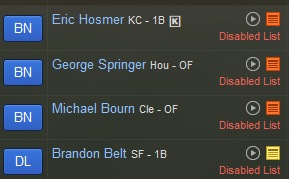 Okay, yes, I have two problems, and the first is an unhealthy (and so far hazardous) love of Eric Hosmer. Guilty. But the other is that guys are so dang hurt. I have stressed over whether to dump Hosmer, or Springer, or Belt, or Votto in various leagues, and that's before we even get to pitchers, where I'm sitting on guys like Anibal Sanchez, Masahiro Tanaka, and Andrew Cashner in various leagues.

So this week (today and Friday), I'm running through some of the hurt guys, and whether they're worth waiting for. Today is the AL. Last time I did this piece, it was judging whether the guys were worth their Yahoo! ownership percentages. This time, I'm not going that route, because the further you get into a season, the more teams and leagues get abandoned, and the less ownership percentage really serves as an indicator of fantasy player trust. Also, I didn't want to pigeonhole myself. But more the first thing.

Hurt guys I'd definitely hold on to

Yup, this is the only hurt AL guy I think you have to keep. Encarnacion has been on the DL with a quad strain since early July, but he was a stud for most of the season before that. His season slash line sits at .277/.368/.591 with 26 homers, and even with his missed time he is a top-25 fantasy hitter for the season. Now, he's on a minor-league rehab assignment, and we're expecting him back in the next few days.

Hurt guys I'd try to hold on to

McCann and Myers have both been big-time disappointing this season after really good 2013s. Myers has been out with a fractured wrist since late May, but he definitely has a lineup spot when he gets back - either Kevin Kiermaier gets benched, or Cole Figueroa does and Ben Zobrist moves back to second. His pedigree is still great. Meanwhile, McCann sits at .238/.294/.384 with 13 homers, a big disappointment considering his move to Yankee Stadium. Still, even that lackluster performance has him as a top-15 fantasy catcher, and he has the highest upside of any of the guys down there. And his DL stint - a seven-dayer because of a concussion - could be short. It could also not be, but you know.

I've been eagerly awaiting Springer supposedly imminent return for a couple weeks now. He just got shut down for a couple more weeks with a setback on his quad strain, but we could still see him before August is over, and while he won't hit like he did during that insanely hot early period, he's a potential benefit.

Look, I don't know what to make out of Tanaka from here. But I do know that if you dump him and he comes back like he was before, you'll hate yourself, and it's not worth it.

Hurt guys I'd be fine dropping

Several of those guys - Bourn, Eaton, Fowler, Victorino - are outfield-only, which is reflected here. There are a lot of outfielders out there. B.J. Upton. Colby Rasmus. Seth Smith. Josh Willingham. I don't know who, but there are a lot of available guys out there who generally approximate what the hurt ones will give you. Just move on.

Craig and Swisher are similar guys, but also have first-base eligibility. It doesn't change much, as first base is also deep enough that these guys and their disappointing seasons don't really help.

Lawrie has been a big disappointment so far in his career. His career OPS+ is over 100 entirely because of his 2011 cup of coffee - he's been sub-100 every year since. And he's brittle; he hasn't played more than 125 games in a season yet, he's on his sixth career DL stint, and his return from his prior stint was for all of one day. His second- and third-base eligibility is nice, but you can't possibly rely on him.

I dealt away Sanchez literally one day before he got hurt, packaged with Greg Holland and Glen Perkins to get me Yu Darvish. So I've paid really close attention to him this year. After 10 K/9 last year and leading the league with a 2.57 ERA, those numbers sit at 7.3 and 3.53, respectively, this year, and that ERA is 4.59 over the last two months. I still think he's good, but this year's version of Sanchez, plus his injury, makes him easily replaceable.

Soria was due to regress, and that regression, combined with a move to a team that wasn't giving him saves, meant he was droppable even before his injury. Now that he's hurt, he's barely ownable.

Hurt guys I'd be looking to add

Here's the thing about Gentry - yes, he's outfield-only, and as I outlined above, there's lots of those. But when he's back, he'll play a fair amount, because Oakland manages to have 15 guys fill nine lineup slots a fair amount, and he is a steals specialist. If you need steals, Gentry is widely available and will help.

Holland is finally rehabbing from his knee surgery, and Texas' plan still appears to be to have him return by the end of the month. He's been only a slightly above-average pitcher over his career, but he's 27 now, and he has always been seen as having more potential than he's shown. There's definitely a rotation slot waiting for him in Arlington, and there's not a starting pitcher owned as lightly as Holland (10 percent) who has his potential upside.