If you buy something from an SB Nation link, Vox Media may earn a commission. See our ethics statement.

Well it has finally happened.  Our sponsors over at FanDuel finally released an iPhone app.  This is actually pretty big news, and couldn't come at a better time with the NFL season right around the corner.  I for one am very excited; the app is pretty damn good to be honest.  I will include a link to download the app at the bottom of the article, so if you have an iPhone I highly recommend downloading it.

Here is a preview of the FanDuel iPhone app: 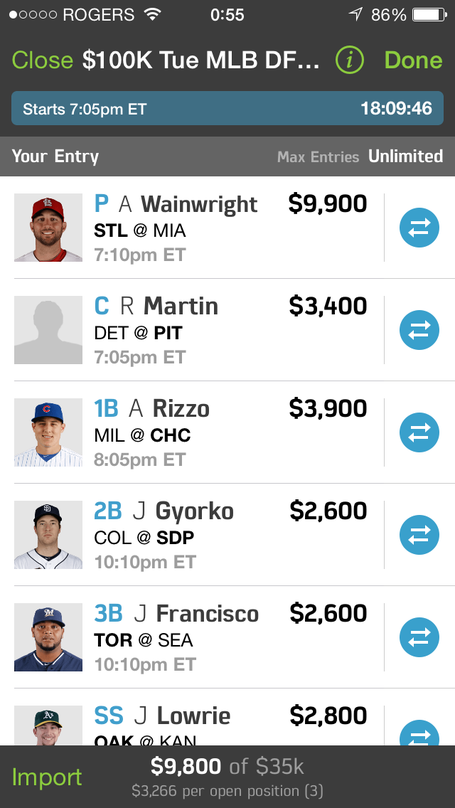 Back to business.  We have a full slate of games today, and it was difficult enough choosing players so I went a different route today - I picked guys I like for tournament players, guys for cash games, and guys for both.  You can pick and choose whomever you like in your line, but I did my best to highlight value.

All Players Prices Are Based On FanDuel Pricing

SP - Adam Wainwright, St. Louis Cardinals, $9,900 - Wainwright is more of a cash game play in my opinion, sure you can use him in tournaments, but he will eat up a ton of your budget.  Wainwright had a really great start against the Red Sox last time around with 7 strikeouts in 7 innings pitched.  He has owned the Marlins in his career, and the only two plays that scare me tonight are Stanton and Yelich.

C - Russell Martin, Pittsburgh Pirates, $3,400 - I really like the Pirates today, the Tigers bullpen is depleted after the 19 inning game on Sunday, and Verlander's short outing yesterday.  The Tigers will use Robbie Ray tomorrow a LHP, whom I think Martin should benefit from.

1B - Anthony Rizzo, Chicago Cubs, $3,900 - Rizzo has been mighty quiet with the long ball the last week or so, but luckily for him one of his favorite pitchers is coming to town.  I am not a big BvP guy, but it's hard to ignore that Rizzo has four homeruns in 19 at bats against Wily Peralta.

2B - Jedd Gyorko, San Diego Padres, $2,600 - Gyorko makes an excellent tournament play tonight against Yohan Flande.  If you really want to get ballsy I dare you to use a Padres stack tonight.

3B - Juan Francisco, Toronto Blue Jays, $2,600 - Another boom or bust player on my list today.  Francisco can easily hit two homeruns in a game, but he can also easily strike out 4 times.  Chris Young takes the mound for the Mariners, and historically has long ball problems, I predict regression, call me a hater.

SS - Jed Lowrie, Oakland Athletics, $2,800 - I am sure you are surprised as I am that we've come this far and I haven't picked on Jeremy Guthrie yet.  To be honest the A's bats are cold right now, and I don't see much value in them tonight.  On the other hand I see even less value in shortstop, and think Jed Lowrie should be serviceable tonight.

OF - Michael Brantley, Cleveland Indians, $3,900 - Brantley can be used in both tournaments and cash games.  He has a high floor against Josh Collmenter, and should be good for a few points today.  Brantley is one of the guys I like to target due to his diversity.

OF - Kole Calhoun, Los Angeles Angels, $3,200 - Jerome Williams heads to LA to pitch against the Angels.  Unless Brian Onora is the umpire it's safe to say Williams will get rocked.  Calhoun bat lead off against RHP, and is in a great spot today.

OF - Scott Van Slyke, Los Angeles Dodgers, $2,500 - Van Slyke, the ultimate punt against LHP in tournaments should be in the lineup today.  If you want to save some money on a player with a great matchup with a high ceiling this is your guy.

As always please check lineups and weather conditions before rosters lock, nothing is worse than having inactive players on a daily fantasy roster.

Come join me and other FakeTeam writers along with the whole SB Nation in some DFS fun, turn $2 in to $1200.

Here is the link to FanDuel's iPhone app.  Enjoy.