The slugger has rejuvenated his career in Milwaukee, yet fantasy owners haven't really seemed to notice.

Share All sharing options for: Mark Reynolds and Unowned Power

Yahoo! ownership percentage of all players with at least 10 home runs 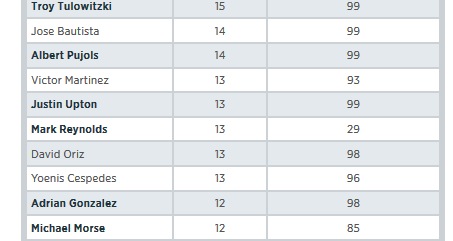 Mark Reynolds has found a new baseball life in Milwaukee this year, after spending 2013 with the Indians (who released him) and the Yankees. It really started to look like his career had come and gone, making him the new Matt Stairs, occasionally resurfacing as a late-season pinch-hitter and little more.

Mark Reynolds is only 30.

Like, that surprised me when I realized it Thursday. I thought Reynolds was 34, 35 at least. Sure, at 30 he's past his prime, but not by much. He has 215 home runs, placing him 32nd on the active list (a Baseball-Reference list that includes Miguel Tejada, so "active" is generous, but whatever), and he's younger than all but two of the guys ahead of him. Basically, he's got a chance at 300 or more career home runs. This power isn't any kind of fluke.

Now, it's not hard to figure out why Reynolds is so widely available. Again, he was released just a year ago. He stole 24 bases in a year once, but that was 2009 and he has only 19 since. And his .211 batting average this year is basically in line with his career. He's a one-trick pony. But that trick - hitting the ball a long way, and doing it a lot - means that he covers three of your basic 5x5 categories (HR, R, RBI) with at least some regularity. And it's not like he's done it in spurts, either -- six home runs in April, six in May, one so far in June.

Reynolds is the righty half of the Brewers' first-base platoon, splitting with Lyle Overbay. He's played only 28 games there - the downside of being the "half" that hits lefties - but he's also clocked 24 games at third base and two in the outfield. All told, he's played in 49 of the Brewers' 60 games, including 25 of the team's last 26.

Again, 10 home runs right now is basically a 30-homer pace. Everyone who's done that is owned in at least two-thirds of leagues, with two exceptions: Marcell Ozuna (48 percent) and Reynolds. Yes, there are reasons to be wary of Reynolds. But in a league that doesn't have the power it once did, the fact that he still has his power is enough to outweigh a lot of the cons. And the fact that he's only 29 percent owned is gibberish.