Kicking off our World Cup coverage with a preview of Group A.

Share All sharing options for: World Cup Preview: Group A

Welcome to the beginning of our World Cup coverage on Fake Teams.  If you are someone who followed my (horrible) EPL advice all season, welcome back.  To you newbies, get ready to question my sanity.

I will be joined by Will Jordan (@KingWillyJ) to get you all the World Cup coverage you need.

Looking to play in a fantasy league during the World Cup?  We are going to have a league on Fifa.com.  That will begin on June 8th.  More details to come.

Also looking to play a bracket?  We are using the ESPN.com World Cup Bracket predictor.  I have started a group named "Fake Teams" and the password is "BeatGhana".  Feel free to join me in predicting Iran to win it all!

Now, let's start off with a preview of Group A, or as I like to call it, Brazil and their meat.

Possibility of advancing to group stage:  98.9% (this is not scientific, but my own judgment)

Trivia: Brazil is the only team to have played in every World Cup

Sad Fact: Brazil is handing out pamphlets that are telling tourists not to scream if/when getting mugged.  Sounds like a GREAT time!

Short Team Preview: Brazil, as always, is loaded with talent and anything but winning the whole thing will be a disappointment.  After a dominating performance in the 2013 Confederations Cup, the host nation has their eyes on their 6th title.

Player To Watch: Neymar.  If there is one player that is carrying the entire nation's hopes and dreams, it has to be Neymar.  The 22-year-old Barcelona forward/winger was good in the Confederations Cup, but Brazilians are expecting greatness from this one.

Other Players to Watch: Basically their entire midfield.  They are all great options with Oscar and Ramires leading the bunch.

Goofy Fact: They have a player named Hulk.  I want that jersey IMMEDIATELY!

Conclusion: Not many weaknesses.  Talent galore on this team but can they handle the pressure of playing on home soil?  If you have Brazilians on your fantasy team, you will do well.

Possibility of advancing to group stage: 51.3%

Trivia: Literacy in Croatia is at a whopping 99.2 percent.  So, I expect my readership in Croatia to be high.

Short Team Preview: Stuck in a tough group with host Brazil and Mexico, Croatia will have to rely on goalkeeping and good play from Luca Modric and Mario Mandzukic.

Player to Watch: The mentioned Modric, the Real Madrid midfielder, has the ability to score at any time.

Other Player to Watch: Mandzukic.  The big Bayern forward will need to score some goals for Croatia to have any chance.

Conclusion: With Brazil taking the top spot, I predict Croatia will finish 2nd in this group and advance to the knockout rounds.

Possibility of advancing to group stage:  39%

Trivia: Best result at the World Cup, despite Mexico's attitude that they are amazing at soccer, is just the quarterfinals.

Sad Fact: Actually wants to be friends with Texas.

Short Team Preview: Lucky to even be in the World Cup thanks to the US saving their asses, El Tri will come up short again.  Their fans will continue to throw feces at Americans for weeks following the World Cup.

Player to Watch: With Luis Montes out after suffering a gruesome broken leg, someone will have to step up.  I am looking at you, Giovani dos Santos.

Other Player to Watch: Chicharito (Javier Hernandez), where have you gone?  If he plays well (if at all) in the group stage, Mexico could make some noise.

Goofy Fact: A donkey was jailed in Mexico for assault and battery in 2008 after it bit and kicked two men.

American Team Equivalent: Philadelphia Eagles.  They have never won the big one and their fans are absolutely ruthless.

Conclusion: If their matches were played in Azteca, I would give them a chance to make it to the knockout round.  Unfortunately, they are in Brazil.  It will be a quick stay before all of Mexico retires for a siesta.

Possibility of advancing to group stage:  3.7%

Sad Fact: I'm guessing it is REALLY hot there.

Short Team Preview: The pride of African soccer, Cameroon finished first in their qualifying group with 13 points.  Granted, they were playing Libya, Congo and Togo, but still.  Way to go Cameroon!

Player to Watch: Captain Samuel Eto'o is making what will most likely be his last performance in the World Cup.  As far as he goes, Cameroon will go.

Other Players to Watch: Their three goalkeepers have a combined 12 national team caps.  That does not bode well for Les Lions Indomptables.

Goofy Fact: At the 2002 African Cup of Nations, Cameroon wore sleeveless kits that were banned by FIFA from use in the 2002 World Cup.  They looked like this: 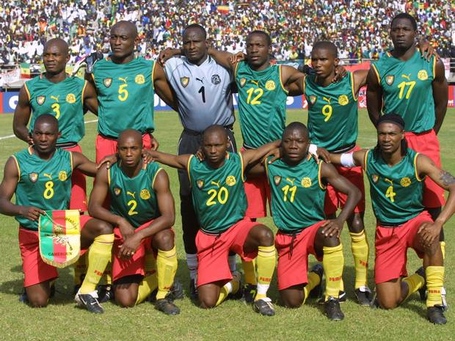 Conclusion: Enjoy their great kits.  You won't see them long.