Ian Kennedy has returned to 2011 form, but is this success sustainable?

Share All sharing options for: Ian Kennedy: A Change of Heart

Ian Kennedy is throwing better than he has in his entire career, and fantasy owners should be taking notice. Kennedy’s improvement has run parallel to his move from Arizona to San Diego and the simple analysis would be to say that a move to Petco is the reason. A deeper dive into his Home/Away splits in 2014 reveals a completely different story:

The above table represents a great opportunity for fantasy owners. Kennedy has been pitching excellent, putting up quality numbers, but he hasn’t even started to take advantage of his cavernous home ballpark. Given time and a larger sample size, the home/away splits should normalize and I expect to see a 200 IP, 3.40 ERA, 9.0 K/9 season out of Kennedy. So what’s fueling his turnaround? A return to his optimal mix of pitches.

2011 has been Kennedy’s banner year to this point with a 21-4 record, 2.88 ERA, 22.0 K%, and 1.09 WHIP. His fastball velocity was fringe average (90.3 mph) and his walk rate an unspectacular 6.1%, but it was his diversity of 4 quality pitches that kept hitters on his toes and allowed his stuff to play up. Take a look at how his mix of pitches slowly shifted after his 2011 campaign. Whether he was throwing more fastballs (2012) or more changeups (2013), Kennedy was becoming too predictable.

2014’s mix looks awfully similar to his 2011, especially as it relates to his mediocre changeup. Kennedy is back to throwing his changeup less frequently, and relying more on his curveball/cutter. In fact, his changeup and ERA share a stranger relationship than I anticipated. 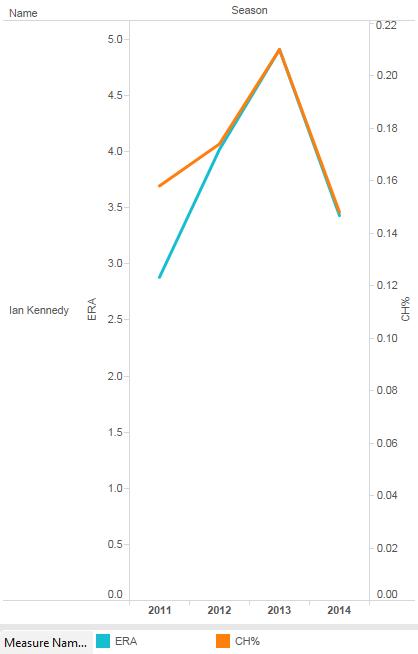 Of course there are plenty of confounding variables, but as long as Ian Kennedy is not working predominantly off of his fastball and changeup he has had success. This isn’t earth-shattering news; neither pitch is seen as a wipeout offering, but the trend we’re seeing in 2014 is important. I expect quality numbers the rest of the way for Kennedy and am trying to work him in to every trade talk I’m currently engaged in. His numbers in 2014 also past the sniff test in terms from a luck perspective – a .304 BABIP, 73.1% LOB%, and 7.3% HR/FB% don’t scream regression and are all right in line with his career totals. ZiPS projects a 9-8 W/L, 3.43 ERA, and 8.39 K/9 the rest of the way and while the W’s are difficult to project, I think the rest of those numbers are right in line with my expectations. I’d recommend inquiring on the availability of Ian Kennedy if any of your teams are looking for some early starting pitching help.