Young Guns: Robbie Ray gets a cup of coffee

Robbie Ray was the centerpiece of the trade that sent Doug Fister to Washington. Today, he will make his major league debut against the Houston Astros. Spencer Silva lets you know what to expect from the 22-year old lefty.

Share All sharing options for: Young Guns: Robbie Ray gets a cup of coffee

Robbie Ray will make his major league debut in Houston today for the Detroit Tigers. Ray is best known as the centerpiece of the trade that sent Doug Fister to the Nationals this offseason (along with utility man Steve Lombardozzi and reliever Ian Krol). In the same way Zack Wheeler will be forever linked to Carlos Beltran, the surname Fister will long follow Ray. When announced, the trade was met with widespread confusion. Dave Cameron of Fangraphs wrote a column entitled "Nationals Steal Doug Fister from Tigers," and a few months later he unequivocally named it the worst transaction of the 2014 offseason. Prospect Guru Keith Law was equally confused, giving a brief and underwhelming scouting report:

Ray is... a potential back-end starter who shows four pitches but has nothing plus. He's a project, a guy with some value but who could use some mechanical adjustments.

Why would the Tigers, a perennial contender, send Doug Fister, one of the league's better pitchers--a man at the height of his powers-- to the Nats for a package of spare parts? In an interview with Buster Olney last week, Tigers GM Dave Dombrowski put it this way:

Apparently other organizations didn’t like him as much as we did, because we had him up there higher in our evaluation process and we were very happy with him… we think he projects to be at least a #3 starter, not necessarily now, but in the future. Hopefully we’re right and they’re not, in this case.

It's an unexpected bit of irony that Ray will be making his 2014 big league debut before Fister, who's scheduled to return Friday. So far, Ray has rewarded Dombrowski's faith, as the early returns suggest Ray could be a viable major league starter. With the AAA Toledo Mud Hens, the 22 year old has dominated, posting a 1.53 ERA in 29.1 innings (5 starts) with 21 strikeouts against 5 walks.

Here's a taste of what you'll see today:

Ray's prospect status has waxed and waned in proportion to his fastball velocity. As a HS Junior, Ray garnered attention flashing a fastball that scraped the mid 90's. However, the following year the left handers' velocity regressed and he dropped out of early round consideration, eventually falling to the Nationals in the 12th round of 2010. After signing, Ray's fastball held in the 87-91 until last year when he saw a considerable velocity spike. Ray now works 91-96 with the heater, topping out at 97 with excellent tilt and movement. In 2012 (pre-velo spike), the Nationals tinkered with his delivery to maximize deception, which has made his fastball very difficult to pick up for both right and left handed hitters. Ray's fastball is an excellent pitch, and he will lean on it much like another lanky lefty, Tony Cingrani.

Ray's second best pitch is the cambio, which flashes plus, but is overall inconsistent. In his last start vs. AAA Gwinett, I saw him throw a couple of beauties like the one below. It appears to have good velocity separation from the fastball-- no gun available-- and the late fade mixed with Ray's deceptive delivery should continue to give batters fits.

The development of Ray's breaking pitch--he's gone back and forth between a slider and a curve-- will make or break (pun alert) his career. Right now, it's awful; Baseball America graded it a 35 in its 2014 prospect handbook, a well below average pitch unfit for major league action. If Ray continues to spin a near F breaking ball, he and his amazing fastball could end up pen-side. Check out the 0-2 clunker he "tantalizes" Braves prospect Tommy La Stella with.

Ray's delivery reminds of Cole Hamels, especially in the change-up graphic above. Both lefties, with high leg kicks, you see in the image below that Hamels has much better balance, as Ray collapses over his back leg and goes into a hunch. He then steps across his body, which creates the deception I mentioned above. I like his posture, and-- from what my amateur eye can tell-- he gets above-average extension (release distance), allowing his pitches to play up. 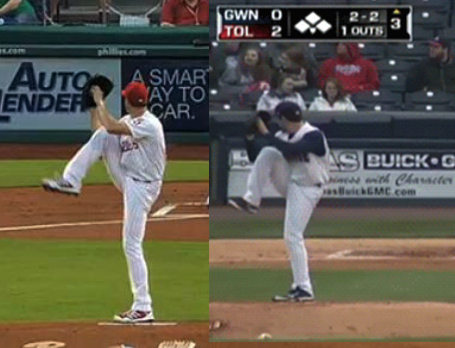 Ray's fastball/change combination is electric; I think both will play at the major league level. If Ray can continue to throw strikes and develop just an average breaking pitch, he has the chance to be a mid-rotation starter, with an even higher ceiling than that. His spot start today comes against the lowly Astros, so while I can't recommend him as a short term solution in leagues of any size, he is worth streaming, and could be an excellent under-the-radar play for your DFS squad. Ray is an interesting name to keep tabs on in dynasty formats. His upside is legit, and I'm in the camp that sees Ray as a potential mid-rotation starter rather than a back-end of the rotation/bullpen arm. He didn't appear on a single top 100 list, meaning his price is likely reasonable. For all further questions, turn to his 80-grade goatee. 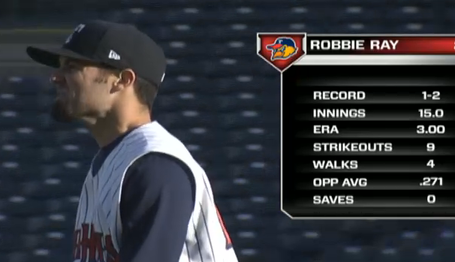