Justin Upton Fantasy Outlook: What to expect from the Braves outfielder going forward

Justin Upton is off to an eerily similar start to his 2013 season, putting together a fantastic month of April before falling off in May. But does that mean fantasy owners should condemn him?

Share All sharing options for: Justin Upton Fantasy Outlook: What to expect from the Braves outfielder going forward

Finding a profile on Justin Upton this offseason that didn't mention his drop in offensive production over the course of the 2013 season was rare. Rightfully so, many experts and fans alike were cautious about Upton heading into the season because of his demonstrated inconsistency.

Utley is reverting back to his 2009 self, and he's doing it in a year that's seen a lack of depth at the second base position, despite the emergence of several breakout performers. Selling high on the Phillies second baseman could be a big mistake.

The Braves outfielder is once again regressing after a hot start, which has led to a lot of people saying "I told you so," myself included.

And yet, there's no debating that Upton is a valuable fantasy player, and he's still one of the top performers of the season, even with his slump this month. We've also seen that there's not a ton of merit to the argument that a player is likely to drop off just because he did so in the previous season, though it's another matter if said player is actually beginning to drop off, as is the case with Upton.

In an effort to make sense of Upton and to figure out what to expect from him going forward, let's take a look at some of his pros and cons.

Why Justin Upton is a valuable fantasy asset

He's been one of the best players in fantasy baseball this season.

Quite simply, Upton has been one of the best offensive performers thus far. He's already hit nine home runs, driven in 19 runs, scored 21 times and is slugging .537. His .898 OPS ranks 18th in the majors and ninth among outfielders, and according to ESPN's player rater, Upton is the 25th-most valuable position player so far and ranks 37th overall.

Historical precedent shows he improves (or is just as good) in the second half, even though popular opinion says otherwise. 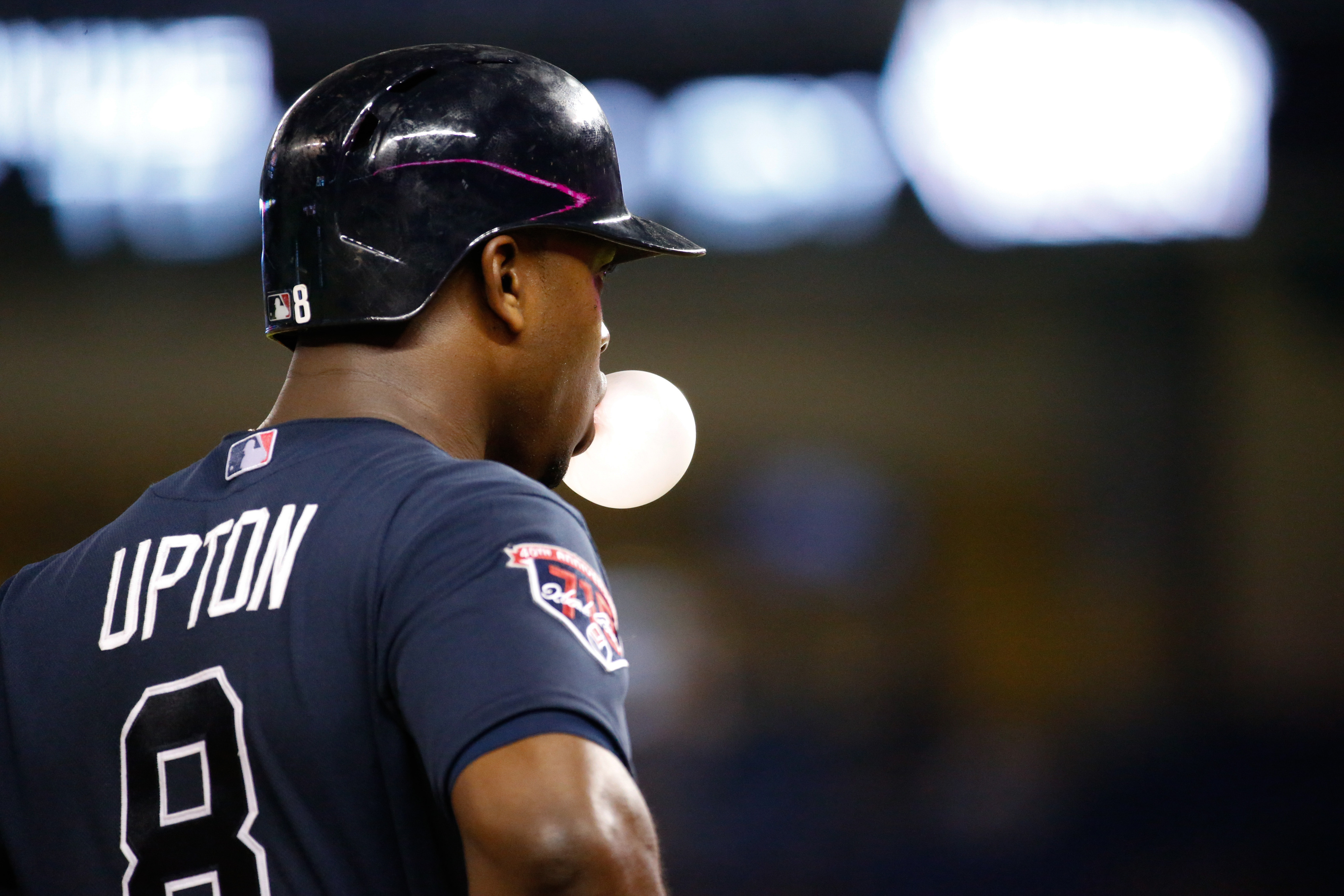 Clearly, that shows the mark of a player with tremendous upside, a phrase that gets tossed around the fantasy landscape a lot but doesn't really mean anything until the player fulfills said "upside." Upton has yet to post a huge season that demonstrates what many believe he's truly capable of (think 40/30 and a .950 OPS), though his crazy start this season showed maybe, just maybe, this could be the year if the Braves outfielder can turn it around. I'd advise caution against putting too much stock into this clichéd term, but I'll admit that Upton's "upside" is very enticing.

Why Justin Upton could hurt your fantasy team

He has one RBI this month.

Most importantly, Upton is regressing significantly this month, which is more of the same from last season. He's driven in all of one run in 44 at-bats in May while striking out 16 times. That means over 36 percent of Upton's ABs have ended with a long walk back to the bench, which raises a ton of concern. He's also batting just .182 in May, which isn't too far off from the .211 batting average he compiled last May.

His BABIP is returning to his career norm—sort of.

Part of the reason Upton was unable to maintain his ridiculous start to the season was that his BABIP was .423 in March/April.

Upton has an unusually high career BABIP of .334, so he's always going to be above the MLB norm (which is approximately .300), but maintaining an average 89 points above his career total was never going to happen.

Unfortunately for Upton, the decline has been steep—very steep. His BABIP in May is a paltry .259, a 164 point drop-off from his March-April number. That, combined with Upton's massive strikeout rate, almost entirely explains the Braves outfielder's struggles this month. 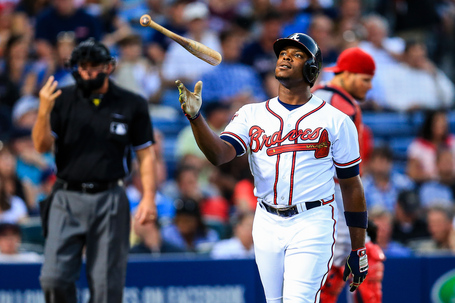 Upton has always been strikeout-prone, but this is getting ridiculous.

And yet, the .259 BABIP could be an indication of some bad luck, which forecasts a rebound. It remains to be seen where Upton will settle, though it wouldn't be surprising to see his performance continue to bounce around throughout the season.

The entire Braves offense is floundering.

It's no secret that the Braves have had trouble scoring runs this season, which hasn't helped Upton's RBI numbers. Only the Padres have scored fewer runs than Atlanta, the latter of which is batting .231 with a .663 OPS as a team, both of which are third-worst in the majors.

The clear translation is that the Braves can really only go up from here, and given their team's offensive potential thanks to a star-studded lineup (Freddie Freeman, Jason Heyward, Andrelton Simmons, Chris Johnson), it's hard to believe that won't happen.

The ship to sell high on Upton has definitely sailed, given his recent struggles, so you can effectively throw that option out the window—for now.

But if you're an Upton owner, that might be a good thing. The Braves outfielder's BABIP this month, along with his team's offensive performance, have both essentially hit rock bottom, which bodes well for those hoping for an improvement. I'm no fortune teller, but those points, combined with Upton's hot start before this month and his potential upside, all point toward a big performance this season, if not at least a respectable one.

Conversely, if you're part of the majority that doesn't own Upton, you'll probably find no better time to buy low on him, because if he goes any lower, you won't want him on your team anyway. Use that to your advantage and snatch him from someone else's grasp before he heats up again.