Drew Pomeranz just earned a spot in the Oakland A's rotation. Spencer Silva takes a look at the post-hype Lefty.

Drew Pomeranz has been on the scene for a while. He was drafted in 2010 by the Indians 5th overall--before both Matt Harvey and Chris Sale. At Ole Miss, the 6'5" 240 lb lefty progressed statistically in each year of his college career, culminating in a junior season that saw him post a 2.24 ERA with a 139/46 K/BB in 101 innings. This performance earned him comparisons--in stature, grace and hue-- to another "big-time" SEC lefty, Mike Minor, who went 7th overall just the year before. Here's a report from Baseball Prospect Report in 2010:

"He was good. He had a really good fastball, really alive 91-93, lots of 91s. His curveball looks exactly the same way coming out of his hand and then drops on you. He likes to come back with high fastballs after the curveball, again with the same release point. You have to be ready for his curveball because he will throw it any time in the count. He throws an ordinary change-up but rarely shows it to left-handers or right-handers. He can be worn down quickly if worked. His stuff started slipping in about the fourth inning of this look. I'd grade his fastball command a B- and his fastball movement a B- and say that his curveball is really his ticket. His velocity is 78-82, the rotation is tight, a grade-A."

Pomeranz had a terrific debut in the Indians system, posting a 1.87 ERA in 77 innings. In the summer of 2011, he was traded to Colorado for Ubaldo Jimenez. Baseball Prospectus' then prospect guru and current Astros Director of Player Development, Kevin Goldstein, named Pomeranz the best prospect to switch hands that summer--ahead of Jarred Cosart, Robbie Erlin, Zack Wheeler, and Jon Singleton. This doesn't hold much water now, but it shows how well regarded Pomeranz was as a prospect-- he peaked in 2012 as Baseball America's #30 prospect.

But along came Coors, sapping said promise. In 22 starts for the Rockies in 2012, Pomeranz had a 4.93 ERA (4.81 FIP) with inflated walk and home run totals. My question for Dan O' Dowd (Rockies GM) is, why, of all premium prospects to trade for, would you target a fly-ball lefty who relies on movement and a spike curveball? It's well documented (see Mike Hampton) that said repertoire doesn't work mile high.

Fast forward two years and Pomeranz is now in Oakland, swapped for another inconsistent lefty, Brett Anderson. He's officially replaced Dan Straily in the Oakland rotation, and is a candidate to recapture his prospect magic, now pitching in a friendly run environment.

I was at his start last Wednesday vs. the Mariners, and the stadium gun had Pomeranz's fastball mostly 89-91. According to Brooks Baseball, however, his average fastball velocity was closer to 92-93. The stadium gun in Oakland tends to be a few ticks slow, so I think 91-93 is probably accurate.

It was hard to distinguish between his two-seamer and four-seamer, but both have excellent movement. Some fastballs bore into righties, like a cutter, while others have heavy sink and arm side run. It's very effective, and in spite of how often he throws it (approx 80%), hitters seem to have trouble barreling it up.

Pomeranz throws a knuckle curve that's downright filthy. It has off-the-table vertical break, and it's the origin of most of his strikeouts. Here's an 0-2 knuckle curve to strikeout Robinson Canó from Wednesday, two different angles.

You can see here his grip on the pitch.

Work In Progress. He's only thrown four change ups this season. Below is one of them, which was only a few MPH off his fastball. I haven't seen enough of the pitch to give it a grade.

Pomeranz has simplified his delivery this year, pitching exclusively from the stretch. He has some lefty funk. The oddest part of his delivery is a right wrist cock he employs after separating his hands from his glove. Because of the cock, Pomeranz's glove position at release point and finish is faced down rather than up. Look at his glove position versus fellow lefty Cole Hamels:

Although his balance is inconsistent at best--he even appears to fall back during leg lift at times-- he manages to square up to the plate at release. In the picture below, look how his head is tracking straight to the plate. Many pitchers are tilted to the glove side at release point (see Hamels). 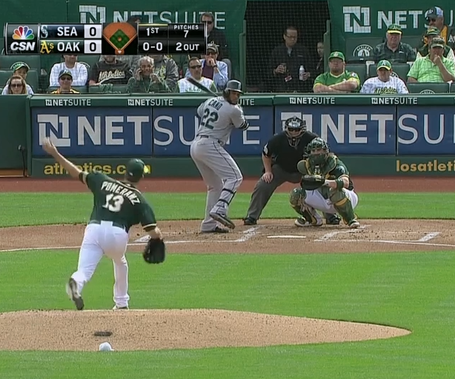 He gets good extension, which help his curveball and fastball play up. I think Pomeranz's success as a starter is linked to the development of his change-up. The Fastball/Curveball combo is excellent, but he needs a pitch that can get quick outs. I noticed he had trouble holding runners on base, something you don't like to see from a lefty.

Pomeranz has as much upside as anyone in the A's rotation. If he polishes up the finer points of his game, he is a major breakout candidate. It may not be this season, but he's worth an add in most leagues based on his upside.