Our Game of the Week turns its attention to the Bronx this week. We provide a preview of the Red Sox and Yankees ahead of Sunday's tilt.

Each Sunday night, Fake Teams hosts a Game of the Week - an opportunity for readers to get together and discuss fantasy baseball while taking in a game. This week, we get a taste of the Red Sox - Yankees rivalry. The game marks the first of three straight weeks in which the Sunday night game will feature either Boston or New York, because ESPN. This is actually a good opportunity for us to dig deep into each of the rosters. I'll be posting profiles of Red Sox and Yankees players throughout the week, so suggest players that you'd like to see featured in the comments.

Recently: The Yankees took two out of three from Toronto to end a week that started with two straight losses to the lowly Astros. At the time of this writing, they were leading the Baltimore Orioles late in the game on Monday behind a strong start from Hiroki Kuroda. The big story in New York is the lack of the production from the middle of the lineup, which is totally something to worry about one week into the season.

Fun with Fantasy: Derek Jeter passed Paul Molitor on the all-time hits list over the weekend, putting him in sole possession of 8th place. He's hitting .250 on the young season after having a lackluster spring, though he is getting on base at a .429 clip. This chart, courtesy of ESPN Stats and current through yesterday, shows where his balls in play are going: 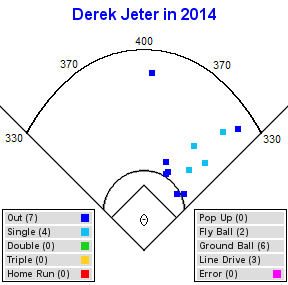 The tweet from ESPN called the chart "Jeterian," which is certainly one interpretation. Another might be that he's showing his age by his bat speed. This is his last season, as you no doubt know by now, so there will be pomp and circumstance everywhere he goes. If you grabbed him in an AL-only draft, think about selling while the selling is good.

SB Nation blog: Over the Monster

Recently: Boston took two out of three from the Orioles in Baltimore to start the season, and they celebrated by getting swept at home by Milwaukee. The bullpen (and Clay Buchholz) let them down in the first two games of the set, but Sunday the offense just couldn't solve a resurgent Yovani Gallardo. Manager John Farrell has been tinkering with the lineup, sending out five different configurations over the last 6 days. Part of that is due to an(other) injury to Will Middlebrooks (a grade 1 calf strain), but another component is platooning and experimentation.

Fun with Fantasy: There will be more for Farrell to tinker with moving forward, as today Boston signed infielder Ryan Roberts and immediately activated him for today's tilt with the Rangers. Roberts won't provide much value outside of AL-only leagues (and even then, his main asset is a batting average that isn't completely terrible), but the move could signal that the Red Sox are worried about Middlebrooks taking longer than the requisite 15 days to heal. If you're a Will Middlebrooks owner in a deep league and need a replacement, grabbing Roberts and platooning him against lefties isn't the worst idea.

New Yankee Stadium continues to be an above average run environment, and last season it was in the top ten for home runs as well. The wind, short porch in right field, and sparse foul territory all conspire to make this a less-than-ideal venue for RHPs, while left-handed batters obviously thrive.

Both teams are at home to start the week, with New York hosting Baltimore and Boston playing Texas. This time around, the series between the two is a four-gamer that starts on Thursday.

What Yankees and Red Sox players would you like to see profiled this week?