Why the Broncos offense will be even better in 2014

Kylan Easterling breaks down the Denver Bronco offense from 2013 and explains how it will be even better in 2014 than it was during its record breaking season last year.

Share All sharing options for: Why the Broncos offense will be even better in 2014

Oh how the rich get richer. Led by Peyton Manning, the Denver Broncos offense led the National Football League in virtually every statistical category that matters in 2013. They also were the first team in NFL history to score over 600 points in a single season, and Peyton Manning broke Tom Brady’s record of 50 touchdown passes in a season with 55. Well then…. on top of that the Broncos weren’t just satisfied with scoring a lot of points, they wanted to spread the wealth around and get everyone involved which is what makes this offense so special for fantasy owners. The 2013 Denver Broncos are the only team in NFL history to have five different players score at least ten touchdowns in a single season.

So how on earth could they possibly get any better you may ask? Especially considering they lost their leading rusher (Knowshon Moreno with 241 rushes for 1,038 yards and ten touchdowns), their second leading receiver (Eric Decker with 87 receptions for 1,288 yards and 11 touchdowns) and their starting left guard Zane Beadles without really breaking the bank to replace them. Well the answer is simple really. It is a combination of Peyton Manning is just that good and a little addition by subtraction. 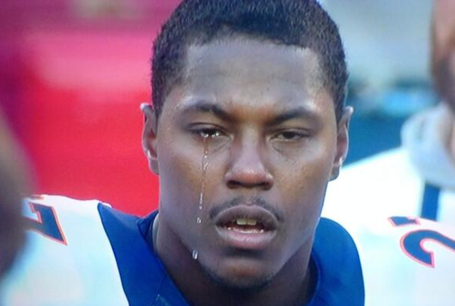 Seriously.. who wants a guy like this on their team???

What does Manning do differently you might ask? Well that’s an entire article all in itself, but for starters, Manning does a great job of identifying and recognizing defensive pressure. He is perhaps the best person (coach or player) in the entire league in knowing when and where pressure will come from. Another underrated talent of Manning is that knows how to shift his protections to combat these blitzes, as well as where he needs to go with the ball, and how quickly he needs to get rid of it.

For our purposes, in the fantasy world, the significance of an offensive line goes unnoticed, but for most quarterbacks having a poor offensive line absolutely leads to a decrease in production. However, Peyton Manning is just at a whole different level when it comes to this so don’t pay any attention to those who have concerns about his offensive line. Peyton Manning will find new ways to mask and cover that weakness all by himself. 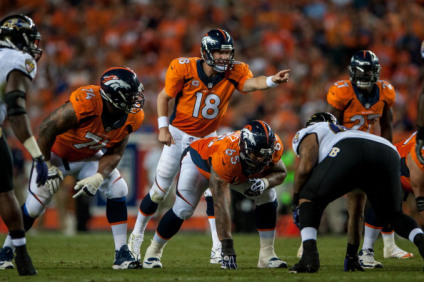 So now let us get to the addition by subtraction combo that will make Denver’s offense that much more consistent and explosive in 2014. Out goes leading rushing Knowshon Moreno and in steps second year running back Montee Ball, who was quietly better than Moreno in 2013 on a touch by touch basis (Ball averaged 4.7 ypc to Moreno’s 4.3 ypc). I know Knowshon Moreno was the 12th pick in the 2009 draft and he came into the league with such high expectations, but the truth is he has just not been a very good running back ever. Even when fantasy running back savior Peyton Manning took over the offense two years ago, Moreno was way to sporadic for fantasy owners to ever really be able to count on him. In fact, 8 of his 16 games last year he finished with less than 50 rushing yards.

Now you can make excuses saying he still finished with over 1,000 yards for the season. Or, that by saying the Bronco offense would get too pass happy at times taking away from his carries. But, in most games, the Broncos offense came out trying to establish the running game, they were forced to abandon it because Knowshon Moreno’s head was rarely in the game. Montee Ball, along with the passing offense, had to come bail the offense out on countless occasions.

The first thing everyone needs to understand about Peyton Manning is that he wants to run the ball. He is smart enough to know that an effective running game opens up the passing lanes down the field. Only twice last year did starting running back Knowshon Moreno get over 20 carries a game and one of those was in over time. In Manning's time with the Indianapolis Colts, a running back getting over 20 carries a game was an expectation for the offense. It always happened. Unless of course it was the final regular season game when they were resting players. Now I know it is a different game today and 20+ carries for a running back on a game-by-game basis isn’t as common anymore as it was back then. But I'm telling you that in a fast paced Denver Broncos offense, I think 20 carries a game is easily attainable in 2014 for Montee Ball. With those 20 carries a game, I fully expect him to vault into the top 5 running back rankings because everyone plays better in a Peyton Manning led offense. 1,500 yards and 13-15 rushing touchdowns are lofty goals for any running back but these are the types of numbers running backs have been putting up in Peyton Manning-led offenses for years. Montee Ball will be no different in 2014. 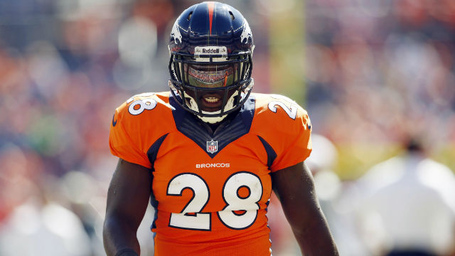 The second assumed major loss for the Bronco’s offense was their second leading receiver Eric Decker, who has been replaced by former Pittsburgh Steeler Emmanuel Sanders. With this move the Bronco’s not only upgraded at the WR position but they added a new dimension to their offense. Where Eric Decker was just another big bodied guy who could go up and catch the ball and most times would not even finish his routes, Emmanuel Sanders is one of the fastest players in the league and can blow the top off of any defense. He plays hard, he plays hungry and he wants to be a part of this Bronco passing attack. It is Sanders who is the much better compliment to the rest of this Bronco offense as opposed to Decker who was kind of forced to fit in with several similar talents including tight end Julian Thomas.

Now the Broncos can spread the entire field with four wide sets with each pass catching weapon having a unique skill set making them all different and making this Bronco offense even more difficult to defend. I know Eric Decker eclipsed 1,200 receiving yards last year, and over 1,000 yards the year before, so most will probably overrate him going into 2014, but you (the wise Fake Teams reader) should not make the same mistake. Look at his stats pre-Peyton and then post-Peyton. Eric Decker is a fine wide receiver, but he is in a whole different world now in New York catching passes from whoever the Jets throw out there on a game by game basis. I would bet he probably puts up numbers that more closely resemble life pre-Peyton Manning (600 yards receiving) and is a pretty big bust.

Now in steps Emmanuel Sanders and his blazing speed that should easily put up similar numbers to what Eric Decker put up, if not more. At least early on in the season and quite possibly the entire season, defensive coordinators are going to be so worried about Demaryius Thomas, Julian Thomas and Wes Welker, that Sanders could very easily put in the best fantasy season of the bunch. He certainly has the talent to do so and you won’t have to over pay to get his 1,200+ yards and 10+ touchdowns. Emmanuel Sanders is a player to target in all fantasy leagues as he should make his first Pro Bowl in 2014. 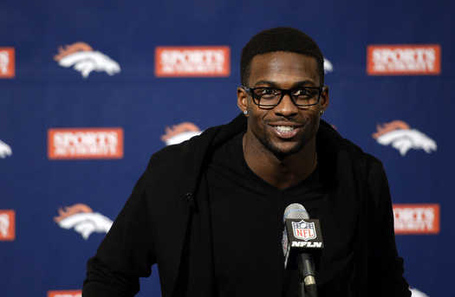 For most fantasy owners it is considered a big no-no to get multiple players from the same offense, but I have never really been found of that theory. I just want talented players who are going to put up big numbers so if that means I end up with every single player on the Broncos offense I will be more than happy with my draft results. I will find enough players to hold me over during that team’s bye week and enjoy the immense success that those players bring me the other 16 weeks of a season. This offense broke so many records in 2013 it was almost unfair and the sad thing for opposing defenses is that they could have broke even more records if they had wanted to. The nightmare will continue for opposing defenders and this offense will be even better in 2014. With Peyton Manning at the helm no other offense in football is better suited to be the first team in NFL history to score 650 points in a season. That’s only 40 points per game, two points more than they averaged last year. That’s a lot of scoring to be spread out throughout that team. They could average 45 points per game if they really wanted to, but they will spread the ball around and keep everyone involved. They will make sure that defenses have to defend the entire field, once again this offense will be impossible to stop and they will be an offense that as crazy as it sounds will improve in 2014. Every single record that they broke last year will be broken again and fantasy owners will be loving every minute of it.

*Follow me on twitter @KylanJE or comment below where I will respond to all of your questions, comments and you can suggest topics for my next faketeams article