Faketeams writer Kylan Easterling explains why Terrelle Pryor will be the Seattle Seahawks best option at wide receiver in 2014.

Share All sharing options for: Terrelle Pryor the Wide Receiver?

The Seattle Seahawks send what is basically a throw away draft pick to the Oakland Raiders for the ever enigmatic Terrelle Pryor. So what does this mean? The ever clever Pete Carroll is always looking for ways to one-up his opponents and he loves getting the last laugh when it comes to turning around players. Plus any franchise is always looking for talented players to compete and improve their team without giving up much in return and the Seahawks may have just pulled a fast one on the rest of the entire NFL with this recent acquisition. Enter Terrell Pryor who certainly wasn’t traded for in order to compete for the starting quarterback job, which belongs to Super Bowl Champion Russell Wilson who certainly isn’t going anywhere anytime soon. The Seahawks also re-signed backup quarterback Tarvaris Jackson to a very team friendly but fully guaranteed contract and Pete Carroll loves his veteran leadership and knowledge of the teams offense. Plus lets face it, Tarvaris Jackson is simply a much better quarterback than Terrelle Pryor is or ever will be. Plus, BJ Daniels is also on the roster and is probably headed back to the practice squad but he represents a nice value to the team as an emergency third quarterback with potential. So where does that leave Terrelle Pryor who is still just 24 years old and oozing with a potential and skill set that few players in the NFL can offer. Lets quickly compare Pryor with one of the only other players in the league that matches his size, speed and athletic ability. That player is none other than Calvin Johnson, yes the best WR in the game is a virtual clone to Terrelle Pryor.

Now im not saying a team such as the Seahawks can just switch Pryor out to wide receiver and there not be any growing pains or any transitional period. I am not saying that at all, and I am certainly not comparing him to MegaTron from any statistical standpoint or projection. I am simply stating that from a coaching/scouting/player developmental standpoint that they both offer the same physical potential and that these types of skills generally translate well when a player is asked to run down the field and catch balls.... Its not like Seattle is booming with an elite group of pass catchers so lets look at how the Seahawks pass catching depth chart stacks up. First of all they are without both of their leading receivers from 2013 in Golden Tate (a player who recieved 98 targets in 2013) and Doug Baldwin has who yet to sign his second round tender (a player who received 73 targets in 2013). Thats 171 targets the Seahawks have to replace and sure a healthy Percy Harvin will get his fair share of passes but can the Seahawks really trust him with his injury history? And whats left after him? Jermaine Kearse? Ricardo Lockett? Or maybe they want to bank their future on another injury prone WR in Sidney Rice? Maybe they want to focus their entire offense on tight end Zach Miller who has had a combined 94 catches during his three year stint with the Seattle Seahawks. My point being is that they do not have a single pass catching weapon that they can depend on as of right now and that is why they made a move to bring in Terrelle Pryor. It certainly wasn't to play quarterback and it certainly wasn't to rot away on the bench.

But he has no receiving experience you say? Well, check this clip out from his days at Ohio State.

And it doesn't just stop there, in high school he would routinely split out wide and catch touchdown passes with ease. He was also an all-state basketball player who some thought could be a lottery pick in the NBA draft, and we all know how much NFL coaches love basketball players. Terrelle Pryor certainly has more experience at the receiving position than all of these other basketball players coaches continue to convert to offensive weapons. Guys like Tony Gonzalez, Antonio Gates, Jimmy Graham and Julian Thomas have all made the transition look rather seamless. Sure, for every converted basketball player who becomes an NFL Pro Bowler there are a dozen other ones wiping down the counters at Wal-Mart and making slurpees at the Little Champ, but the point is that Terrelle Pryor has that kind of potential (not slurpee making potential, NFL Pro Bowl potential). He has those rare special gifts that would make converting to a WR/TE almost seem effortless. He doesn't have to learn the entire offense, he doesn't even have to learn a bunch of route combinations. Even if he brings in only one reception a quarter (four a game for those mathematically challenged) thats 64 catches a year, which would put him right inside the top 10 for tight end receptions, and what he can do with the ball in his hands is even more spectacular. (See below)

Terrelle Pryor is a playmaker, the talents are easy to see when you watch the film. The talents literally jump up off of the screen and scream "SOMEBODY GET ME THE BALL SO I CAN MAKE SOME PLAYS!". Pryor is a big, strong man. He has huge hands, he can jump through the roof and he has elite game changing speed. If your nice he may even bring you some popcorn in the stands or valet park your car before the game. Did you see how he just ran away from the entire Pittsburgh Steeler defense? Or in the film of his touchdown catch how he easily out jumps the defender (a former NFL player might I add) and high points the ball. He actually goes up and attacks the ball at its highest point, now that may sound like a no brainer to most and it probably sounds like the simplest thing in the world but let me tell you not many NFL players have the natural ability to instinctively jump up and do that. It can take years of correct teaching to create those types of habits and the few that do show these natural abilities/talents are not 6'5 and they don't run 4.3 forty yard dashes (unless your name is Calvin Johnson, Randy Moss or... Terrelle Pryor). This is why Terrelle Pryor will be a major contributor on the offensive side of the ball this season, it may not come immediately and he may be hit or miss for the first few games of the season but by the end of the season I think we are looking at one of the more dynamic pass catchers in all of football. He may start out in a role similar to what Julian Thomas did last year for the Denver Broncos which brought in a very nice stat line at the end of the season (65 catches for 788 yards and 12 touchdowns). Not bad for a guy you can probably get in the last round of your fantasy draft. I can see Pryor getting lots of simple routes where the offense can create mismatches and take advantage of the rare height/speed combo that he brings to the game. They will shift their offensive sets and receiver alignments in order to get Pryor mismatched in one on one situations with linebackers or smaller defensive backs (and when your 6'5 like Pryor is almost all of them are smaller). Seattle will routinely use him as a decoy and then hit them with a play-action pass before the defense even knows what hit them. Their dominate running game spearheaded by Marshawn Lynch will force opponents to bring an extra guy into the box. Then combine that with Russell Wilson's uncanny ability to carry out play-action fakes and you can easily see how this offense creates a lot of down field opportunities for its passing game and someone has to catch these balls right? Well Golden Tate is gone, Doug Baldwin might not return, Percy Harvin cant stay healthy and the Lions aren't trading Calvin Johnson any time soon. So enter Terrell Pryor who will be the Seattle Seahawks best pass catching weapon in 2014....and once again Pete Carroll will get the last laugh. 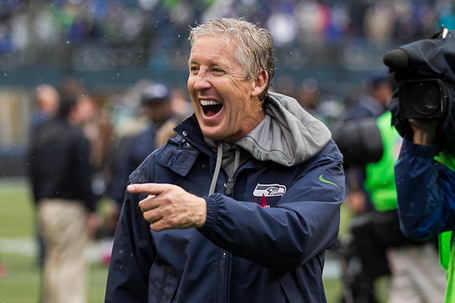 *Follow me on twitter @KylanJE where I will answer all of your questions and you can suggest topics for the next Fake Teams article.