Charlie Blackmon: It's About Time

It only took the hottest start in the majors to draw everyone's attention, but after quietly putting up consistently solid numbers throughout his career, Rockies outfielder Charlie Blackmon is finally getting the recognition he deserves.

Share All sharing options for: Charlie Blackmon: It's About Time

He's the hottest hitter on the planet right now, yet few average baseball fans outside of Colorado had heard of Charlie Blackmon heading into 2014.

It's hard to imagine why. The left-handed-hitting outfielder was drafted in the second round of the 2008 draft, and he's been nothing but consistent throughout his professional baseball career. At every stop but one in the minors, Blackmon hit .288 or better, putting together an overall .309 mark with good plate discipline (.376 OBP, 177 BB vs. 209 K) and decent power (.467 SLG). Then, since coming to the majors, all he's done is pick up right where he left off, posting a nearly identical average (.307) while spending time at all three outfield positions.

In other words, Blackmon is a perennial .300 hitter, yet it took a .500 start to really put him on the map. In fact, prior to the season, he was hardly on anyone's radar. According to NFBC data, the Rockies outfielder was drafted 399.98th, on average, across fantasy leagues, making him the 99th-ranked outfielder. Those who made the late-round investment are certainly receiving quite a handsome reward.

But now, to address the real question, the one on every fantasy player's mind: Is Blackmon's start a real indication of what he can do?

Most importantly, it's worth taking a look at the issue of Blackmon's playing time. Obviously, he'll continue to earn at-bats as long as he keeps up his current stroke, but if you'll recall, Corey Dickerson was initially slated to earn the third outfield spot (after Carlos Gonzalez and Michael Cuddyer), meaning Blackmon projected to earn the bulk of his at-bats while coming off the bench.

Instead, Dickerson was optioned to Triple-A Colorado Springs roughly a week ago when left-handed reliever Boone Logan came off the DL, guaranteeing Blackmon a spot in the lineup for the time being.

(UPDATE: Dickerson has since been recalled from Triple-A, with Brett Anderson headed to the 15-day DL.)

As long as he continues to put up solid numbers, Blackmon is in the lineup to stay. However, he won't have much room for error because the Rockies are surely eager to give Dickerson time at the major league level, especially given the numbers he's put up–.322/.380/.601 slash line–in the minors.

Just what are the chances of Blackmon putting up fantasy starter-worthy numbers? When it comes to his early-season success, you're probably thinking sample size, sample size, but that's not really an appropriate phrase to use when it comes to Blackmon. Sure, he's never hit .500 before, and nobody is arguing that he'll continue to do so, but what's to say that he can't hit .300 for the rest of the season? He's done it time and time before, including for an extended amount of time at the major league level.

Even so, Blackmon doesn't come without a few risks. One of the main concerns, and something that raised a bit of a red flag last season, was the Rockies outfielder's poor plate discipline. His 49-to-7 strikeout-to-walk ratio was uncharacteristic, given Blackmon's aforementioned solid discipline in the minors, but it nevertheless raised some questions about his ability to handle big league pitching in the long run.

Blackmon has quieted those concerns a bit this season, with just a pair of strikeouts in 46 at-bats, but that's nevertheless something worth keeping an eye on. He's also walked just twice this season, a disconcertingly low amount. 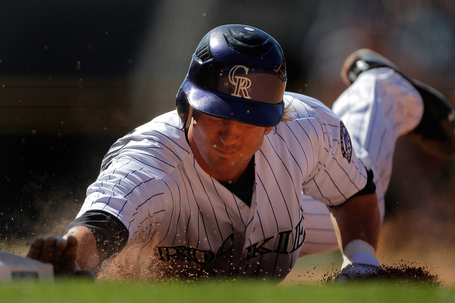 Blackmon stole 94 bases in 489 games in the minors, translating to just over 31 in a 162-game season. Now, he's batting in the leadoff spot. It all adds up to a big season on the basepaths for the Rockies outfielder. (Justin Edmonds/Getty Images)

Something that could make up for that issue, and what also gives Blackmon a significant part of his fantasy value, is his spot in the lineup (leadoff), which serves a couple of fantasy purposes. For one, Blackmon could see a spike in his stolen base total this year. He's already attempted five steals (albeit with just three successful attempts), a huge jump from last season's seven attempts in 82 games. There's also reason to believe Blackmon's stolen base success rate can improve, namely because he wasn't caught once last season and boasts a history of success on the basepaths.

Simply batting at the top of the lineup will also provide Blackmon with plenty of opportunities to score runs, especially if he can succeed in the two previously mentioned categories–plate discipline and steals. Playing in Coors Field has always guaranteed the Rockies a good offense, but this season, the 2-3-4 hitters look especially solid.

If Michael Cuddyer can even approach his .331/.389/.530 slash line from last season–his .347 average thus far indicates he will–and Carlos Gonzalez and Troy Tulowitzki can stay healthy, Blackmon will have a scary trifecta of offensive production hitting behind him.

As you may have gathered, I'm pretty high on Blackmon, and I'd suggest you try to grab him on your roster if at all possible. Perhaps not now, with his value at an all-time high, but rest assured: If Blackmon is on your team right now, you've got a good one. With a history of productivity and an environment that fosters offensive success (a plus lineup and a hitter-friendly ballpark), Blackmon is here to stay.