Give 'Em the Heater, Tony

Tony Cingrani, the king of the fastball, comes into 2014 riding a wave of a successful debut in 2013. Will his limited repertoire be a blessing or a curse for owners this year?

Share All sharing options for: Give 'Em the Heater, Tony

Chicks dig the long ball, so the saying goes. There's something magical about watching a ball explode off a bat, make a 400-foot arc, and deposit itself into the waiting hands of an unsuspecting fan. Another fun thing is to watch pitchers toy with hitters, bringing the heater in belt high, and watching them swing wildly, whiff after whiff after whiff. Something like this (start at :25 seconds and enjoy):

Last year there were a lot of highlights like that one in which lefty Tony Cingrani began his major league career[1] in earnest after the Reds called him up to take the place of oft-injured Johnny Cueto. In 104 innings, all he did was register a 10.32 K/9 rate, which was good enough for 2nd overall in the league behind Yu Darvish (min. 100 IP), 7 wins, and post a 2.92 ERA (3.72 FIP, 3.49 xFIP). Thus, he solidified for himself a spot in the starting rotation, joining a formidable cast with Johnny Cueto, Mat Latos, Homer Bailey, and Mike Leake.

I've been on record already saying that you should pass on Cingrani this year mostly because he's more or less a one-pitch pitcher. Just to make myself clear, that wasn't a typo. Cingrani threw that bad boy 81% of the time last year (league average 54%). Yeah, only big-fat-Bartolo-Colon threw the heater more than Cingrani. Other than the heater, he offers a slider and a change up (but only about 7.5% of the time), but his bread-and-butter is the fastball.

So, how about the fastball? It's not like he's blowing it by anyone with sheer velocity as it comes in at a decidedly average 92 mph although he can get it up to 95 mph when he needs it. However, he gets great vertical movement on the pitch (T-14th overall, min. 1000 pitches) due to his 6'4", tall lanky frame and deceptive delivery (more on that below). Furthermore, it generates a lot of swings (24th overall), and even more whiffs (3rd overall behind Darvish and Hector Santiago) up in the zone as seen below: 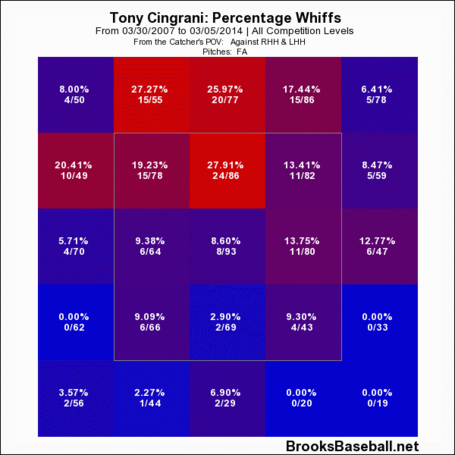 Here is a better picture of the vertical movement he gets on his fastball by month: 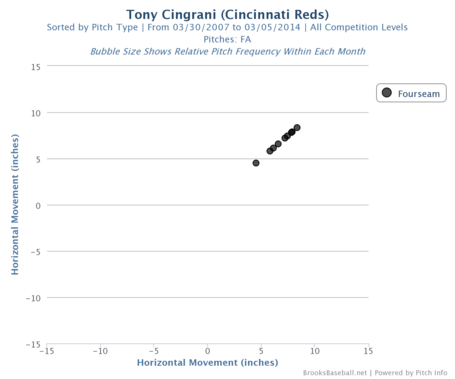 To illustrate the funky delivery watch how Cingrani shows the ball to Pedro Alvarez in his windup then ducks down low, uncorks his arm across his body, then the ball explodes out from a low delivery point, traveling up in the zone to reach the inner half of the plate, belt-high where Alvarez cannot do anything with it. It's a weird motion and has the deception to make his velocity play up and confuse hitters as they don't see the ball until it's already half way to home:

It's obviously his go-to pitch, although the slider (in extremely limited usage) has generated a better whiff rate than the fastball so far along with a very high ground ball rate (86% GB/BIP). Again, though, we're only talking about 92 pitches so it remains to be seen if this pitch will become a greater part of his repertoire moving forward. If the numbers hold true, then he might have a nice secondary weapon to complement the FB.

The rest of his game leaves something to be desired as well. He walked 3.7 batter per 9 innings last year (13th highest in the league, min. 100 pitches), and his above average HR/FB rate won't win him any awards playing half his games in the second most homer-friendly park in the majors behind only thin-aired Colorado. Add to that the fact that he posted the 4th highest LOB rate along with the second lowest BABIP and you can kiss the sub-3 ERA goodbye next year.

That being said, I'm not as scared as I once was about his limited repertoire, as Jeff Sullivan has argued that starters with less than three viable pitches can be just fine in the majors. That being said, there is certainly bust potential here if hitters begin to lay off the high heat, and Cingrani does not adjust by relying more on his grounder-inducing slider. He cannot afford to carry an above-average walk rate into the Great American Ballpark on a regular basis and then watch people tee off on his ineffective change up (1.63% homer rate) or a misplaced fastball. He just doesn't have the overpowering velocity or control to overcome those sorts of mistakes.

Cingrani's pitching profile is usually fit for high-leverage relievers, and thankfully he's not that at present. However, I'd still recommend caution pursuing him this year as anything other than a back-end starter on your team, K-rate notwithstanding. My guess, though, is that someone in your league will be overly tantalized by the idea that they could be rostering the next Yu Darvish, insofar as strike outs are concerned. And they would be wrong. While he could be a useful #4-5 pitcher who racks up Ks, approaches double-digit wins, while hurting your peripherals, it's also conceivable that he winds up in the ‘pen if hitters begin to figure him out.

When I think about Cingrani all I seem to come back to is this:

It remains to be seen if the heater will continue being as effective if that's all he throws all year. My money is to be a little pessimistic at this point. What do you think, though? Opine below or continue the conversation with me on Twitter (@agape4argentina).