In 2013 Brian Dozier's surprising output placed him firmly on the fantasy map at the keystone. Can the good times continue to roll for him in 2014?

Brian Dozier in 2013 represents everything, for me, that is truly exciting about fantasy baseball: namely, discovering hidden talent and/or rostering a breakout player on the cheap. He reminds me of Chris Davis only in that managers probably paid very little to acquire Dozier's services last year and rode him to the #14 overall second baseman in the league. To say that his 18 HR, 14 SB output was a surprise is an understatement, but there it is. Hopefully you caught the lighting in the bottle, but the question now is what will he do for you this year?

"Dozier is a grinder who plays the game right and has loads of polish. His best tool is his bat, as he has a simple line-drive swing and outstanding hands that allow him to spray balls all over the field, and he rarely strikes out. His gap power should provide plenty of doubles, but he rarely hits balls over the fence. He's merely an average runner...."

He goes on to note Dozier's "all-out style of play" will ultimately lead to a roster spot as a future utility player.

Luckily, thus far in his career (963 PAs) Dozier has been thrust into an everyday role at the keystone, due to the dearth of talent on the Twins. So, how have his minor league numbers translated to Dozier's MLB career?

Dozier nearly doubled his walk rate from an awful 4.7% to a more respectable 8.2% last year. In addition the ISO rate jumped from .098 in 2012 (340 PAs) to .170 last year (the second highest rate of his career outside of posting a .183 ISO in AA in 2011). While the strikeout rate inched higher (+2%), he also decreased his GB% while upping his HR/FB average 3%. Mike Podhorzer makes a case for Dozier's average to increase next year due to an expected regression to league average in BABIP, so it's possible that with a .300 BABIP, he could hit closer to .260 next year. His plate discipline backs up the numbers as well as he decreased his swing rate across the board (both inside and outside the zone, while posting a top 40 contact rate (84.6%) and a top 30 swinging-strike rate (6.0%) overall.

His 41% fly ball rate is probably not sustainable (a lot of this is due to an unsightly 14.4% pop up rate), and when coupled with a 277 batted ball distance (#184 overall), it leads me to believe that he'll be more of the line-drive-to-all-fields hitter (as mentioned above in his scouting report) and less of a HR machine next year, as seen in his spray chart below: 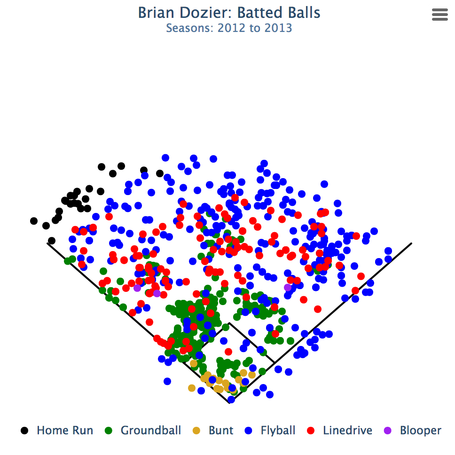 Dozier is a dead-pull hitter and can take a mistake pitch up and in and deposit it in the seats as seen in the graphic below: 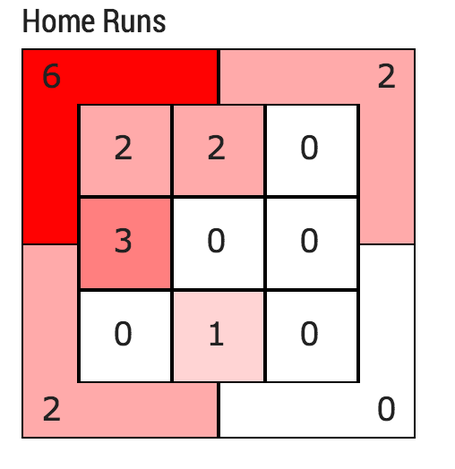 However, the data below, which shows the total pitches he saw in 2013, also shows that he can hit pitches from the middle up and outside part of the plate. This confirms his scouting report as a guy who can hit the ball to all fields (as pulling a ball up and away isn't the easiest thing to do): 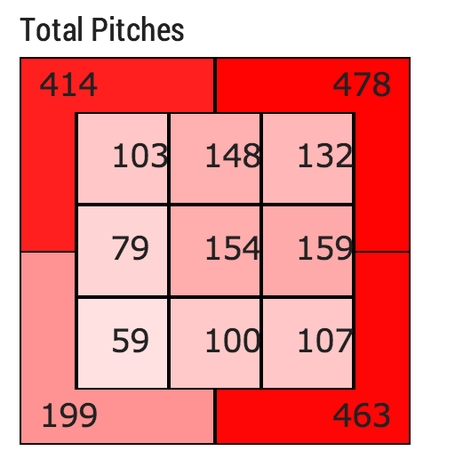 In conclusion, then it's probably fair to expect his 18-HR output to be his peak and I'd take the under on 15 HR next year. However, it is fair to conclude that the number of doubles may increase at the same time.

He stole 14 bases last year and has shown the ability to steal a base in the past, but his 50% CS rate does not portend to future success. Being that Dozier plays for the anemic Twins offense (#25 overall team batting), along with the #27 overall running team last year, there's not a lot of reason to believe that Dozier will steal more than 10 bases this year.

As mentioned above the Twins are probably about a year away (or two) from really putting things together on the offensive side of the ball. Uber-prospects Miguel Sano and Byron Buxton will be much closer to helping the big club, Joe Mauer will (hopefully) be a more consistent presence in the lineup at 1B rather than behind the plate, and the emergence of Oswaldo Arcia could reignite what has been a terrible offense the past few years. However, by that time there is a question as to whether Dozier will even have a full-time role as Eddie Rosario awaits on the farm, with Danny Santana and Jorge Polanco waiting in the wings. As far as 2014 though, Dozier will most likely retain his position in the 2-hole hitting in front of Joe Mauer. It should result in decent counting numbers with a ceiling of about 65-70 Runs and RBI each.

Dozier has been a trendy sleeper pick so far this season, being drafted on average as the #15 second baseman off the board, just after Jurickson Profar and before Neil Walker, according to NESN. That seems like fair enough value to me. He's not going to kill you in any one category and will chip in across the board with some pop and some stolen bases. There's reason to believe the average could come up and he could provide some nice value later in the draft. You can certainly do worse at such an offensively-starved position.