The sweet glovework of Andrelton Simmons has made him a stalwart defensive player for the Braves already in his short career. However, does he merit such respect on the fantasy diamond this year?

You know that feeling when you pull some clean jeans out of the laundry, stick your hand into your pocket, and end up finding a $20 bill? It feels like you actually won the lottery, even though it was your money to begin with. In the same way, owners of Andrelton Simmons, he of the sick (and slick) glove-first shortstops, woke up at the end of 2013 and found that they actually owned the 12th best fantasy shortstop. Not only that but he hit 17 homers. Seventeen! So, what will we find in our pocket this year, a $50 or some crusty, old lint?

Topping out at a 9.9% BB rate in AA (2012), Simmons actually equaled his strikeout rate that year. However, since joining the majors-skipping AAA altogether incidentally-he's managed a below average 6.2% walk rate. Since he doesn't strike out all that much either (9% career) it's not a huge problem for fantasy owners, but it does serve to limit his OBP upside. Unfortunately for Simmons and his fantasy owners, there are other issues with his approach.

Simmons has the unfortunate distinction of leading the majors in infield popups, posting a herculean 17.8% IFFB rate. Lest you think that has to be a fluke, in 2012 (182 PAs) he posted a 17.5% rate. Although he traded about 12% of ground balls for flies last year, typically a good thing, the HR/FB ratio didn't budge. This basically translated to way more fly outs (and more HR), which we all know serves to dampen BABIP and OBP. Finally the speed (see below) that he flashed in his minor league career has not yet translated to the majors, which means that he's not able to garner infield hits on his league average 45% GB rate. All of these factors point to the fact that Simmons is probably going to maintain a lower-than-average BABIP whereby he'll struggle to post OBPs much more than .300.

Obviously this was the big surprise from last year and the sole reason why Simmons actually garnered some fantasy value, because obviously we can't count the uber-tastic glove work that has already put him in the discussion for best defensive infielder in the majors. As was noted above Simmons posted a +12% increase in fly balls last year, with only a 0.4% increase in HR/FB ratios. Basically this is a fancy way of saying if you hit more fly balls in general a few more will go out. The 269 ft. batted ball distance (#240) overall does not lead one to believe that Simmons has somehow turned himself into more of a power guy. Previously he had only 9 combined HR since rookie ball, and he increased his ISO from .127 to .149, so there's evidence that he can pull the ball with some authority as evidenced in this 428-foot shot (his longest of 2013) below:

Clearly that was his sweet spot, and Andrelton likes the ball down-and-away: 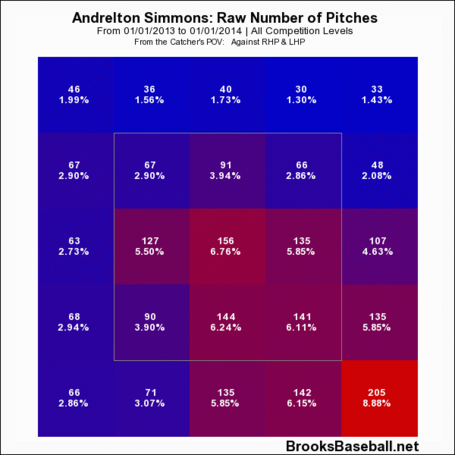 However, as most pitchers have already figured out, if you can keep the ball inside and up in the zone Simmons will continue to be a popup machine. Below are his popup zones from last year: 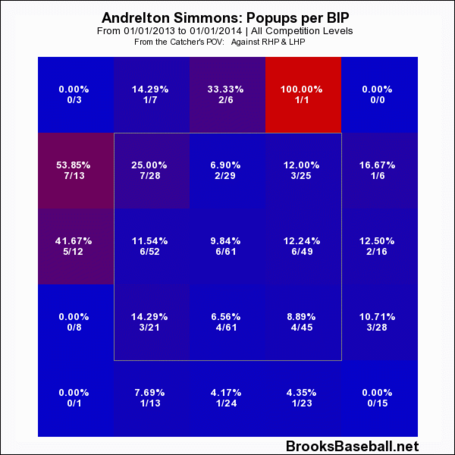 Furthermore, his K-rate was 4th overall last year in all of baseball (8.4%). When coupled with a top 25 swinging strike (SwStr) rate there is reason to believe that he could hit as many homeruns in the future. However, it's difficult for me to see the FB% staying above 40% again this year and so it seems a reasonable assumption that the home runs totals will be lower this year.

As mentioned above, Simmons had a fairly decent track record of stealing bases, accumulating 54 SBs over in just over 1000 plate appearances in the minors. However, he was caught 44% of the time, and thus far in the majors he's posted successful steals on only 2 of 7 total attempts (29% success rate). Being that the Braves ranked 24th overall in stolen bases last year doesn't provide a lot of optimism that Fredi Gonzalez will be giving Simmons the green light much in the future. Frankly, I'd be surprised if he stole 5 bases next year.

Atlanta was 13th overall in runs scored last year, but 5th overall in home runs. Although they ran away with the weak NL East divison, they were ousted in the division series against the Dodgers. For Simmons perhaps the swinging-for-the fences approach (or at least trying to hit the ball in the air more-which seems to work for Oakland) is part of a new philosophy of the Braves approach (they were #17 in runs scored and #20 in home runs in 2012). On the other hand there may be a more conservative, small-ball approach coming in 2014-which is pure speculation. Whatever the case may be, hitting around guys like Chris Johnson, Dan Uggla, and B.J. Upton may not be the most fantasy-lucrative position to be in. It would be difficult to envision much more than 60 runs or RBI this year.

Simmons has definitely quieted his detractors that he's a glove-only shortstop. In a position devoid of offensive value once the elite talent is gone off the board, Simmons may actually provide a decent amount of pop (think 12-13 HR), and a few stolen bases. However, combine that with a batting average that will sit around .260 for a good season and an OBP that flirts with .300 all year and there are definitely limits to his appeal. Dynasty league owners should have already sold, and if you can still get good value I'd do it now. Redraft owners should consider the size of the league before considering rostering Simmons, because if the home runs disappear so does his fantasy value.

One owner in our Fake Teams' 20-team dynasty league took him in the 5th round (around pick 110, avg ADP 144 according to NESN), but another owner was smart and took Jed Lowrie in round 9. Looking at the numbers I'd much rather take Lowrie's production over Simmons this year. You're more likely to find money in that pocket this year than Simmons-who looks like a pile of useless fuzz to me.