Ray takes a look at the huge drop off in 30 home run hitters in baseball and what fantasy owners should do on draft day.

Yesterday, I wrote an article with some early NFBC ADP data indicating that ace starting pitchers are coming off the board early in drafts so far. In that piece I made a comment that ace starting pitchers are the new 30 home run power hitter in fantasy drafts. It's true. Pitchers are putting up better and better stats across the board. More strikeouts, lower ERAs, lower FIPs. Run scoring and home runs are down and strikeouts are up. It might not be so outlandish to go pitcher heavy on draft day in 5 x 5 leagues this season.

The graph below tells the story: 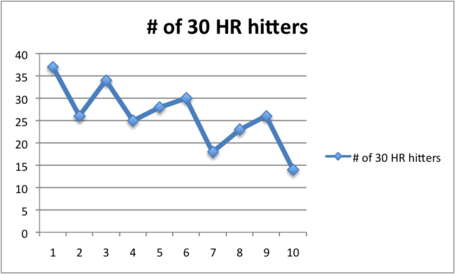 There is an old saying in the investing world, "the trend is your friend", and this trend is not good for fantasy "investors". There has been a high drop off in the number of hitters who hit 30+ home runs each year. Of course the names change, for the most part, but data tells us that the search for power hitters could drive their prices beyond our wildest expectations this season.

Why has there been such a drop off? I am not sure, but I can come up with a couple off the top of my head:

1. we are seeing more and more pitchers throwing in the mid-high 90s with their fastballs,

2. almost every team has at least a few relievers who can come in and bring the heat, throwing high 90s fastballs late in games.

3. the elephant in the room: increased testing and the push by the major league players association, the players, to clean up the game. It can't be dismissed.

So, what is a fantasy owner to do? You can lower your power standard and grab a few 20 home run hitters, but not before grabbing a few aces early in drafts. I know. I know. It is a risky draft strategy as pitchers get hurt more than hitters do. But do they really? Of the top hitters in baseball last season, several big names, and early round picks, missed a lot of time due to injury. A few big names come to mind: Albert Pujols, Matt Kemp, Ryan Braun (suspension), Troy Tulowitzki, Hanley Ramirez, and there were others.

Granted, some of these hitters may return to the 30 home run level in 2014, but do you want to pay up for that only to see him disappoint you in 2014?

Meanwhile, here are all of the starters drafted in the first four rounds of the Tout Wars mixed league that I participated in last season:

All of these starters performed up to expectations, for the most part, except for Halladay and Cain. Verlander wasn't himself last season, but still ended up with 13 wins and an ERA of 3.46. Strasburg wasn't the Strasburg from 2012, but he was still pretty dominant. Weaver missed some time due to injury, but was still very effective when healthy, winning 11 games with a 3.27 ERA.

I need to put more thought into this strategy, but with the drop off in 30 home run hitters for fantasy owners, it may pay to grab a few aces early in drafts and grab a few 20-25 home run guys in the third and fourth rounds.

What are your thoughts? Do you want to pay for that 30 home run hitter or grab a few aces in drafts this season? Let's hear your thoughts in the comments below.