Are there more players in the game today hitting bombs and driving in runs or swiping bags and scoring them?

This past week, Daniel Kelley wrote an interesting piece in which he developed a system – scaled to batting average – that he used to rank players on a level playing field. In his article, Daniel posed the question, "Who was more valuable in standard 5x5 fantasy in 2013: Elvis Andrus or Mark Trumbo?" According to Daniel’s Fantasy Average, Andrus was slightly better in 2013 thanks to his advantage in batting average and stolen base total. A few comments were posted with questions and suggestions for Daniel and he’s already started working to refine his system.

I think Daniel’s idea is interesting and a nice starting point for evaluation but one of the comments got me thinking. Devis_98 wrote the following:

"But what happens when you learn that the supply of players who can do what Trumbo does is a far smaller pool than Andrus type players?"

Taken out of context, I can’t tell if this is a hypothetical scenario or not, but for the purpose of this article, it really doesn’t matter. When I read the comment, I found myself wondering if there are more players in baseball who produce Mark Trumbo-esque stat lines or more Elvis Andrus-type seasons. The perception appears to be that there are more players who can fill up a stat sheet similar to Elvis Andrus than those who can fit into Mark Trumbo’s shoes, but is that really the case?

The table below shows the stats from 2011 to 2013 for each player in standard 5x5 roto categories.

You can see in the tables we have a typical middle-of-the-order hitter versus a quintessential leadoff guy. Power versus speed. Home runs versus stolen bases. RBIs versus runs scored. It’s been echoed throughout the industry that power is "down" in the game today but is the number of run producers really smaller than the pool of run scorers? I looked at the question three different ways. 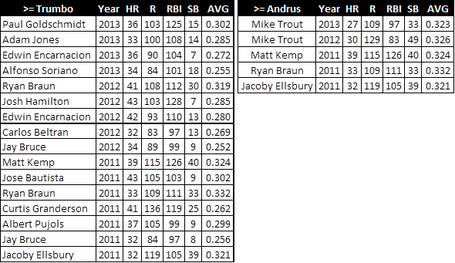 It’s worth noting that neither Andrus nor Trumbo appear on these lists and it’s important to remember that these individual seasons are being judged against the three year averages for Trumbo and Andrus. We need to also consider that Trout is on the Andrus list twice and Ryan Braun, Jay Bruce and Edwin Encarnacion show up a couple of times in the Trumbo table. Having said that, the list of Trumbo or better seasons (thirteen) is more than three times the size of the Andrus list (four). The players shown above are some of the best in the game so let’s see how their three-year averages hold up against the averages for Trumbo’s and Andrus’ last three seasons.

The table below shows the list of players whose average 2011-2013 stat line meet the Trumbo and Andrus average season thresholds.

These lists are a little more even but we see that the players who have averaged Trumbo numbers over the past three years (or two in some cases [Chris Davis, Evan Longoria]) is still double that of the Andrus-averaging players. We’ve weeded out some of the "one-hit wonders" like Alfonso Soriano and Curtis Granderson to show the players who have consistently performed at these levels. This shows that there are very few players that we can count on in terms of home run and RBI production than Mark Trumbo and even fewer players who score runs and steal bases as often as Elvis Andrus. There are a few players like Jose Reyes, Michael Bourn and Jimmy Rollins who just missed the cut for Team Andrus as well as names such as David Ortiz, Adrian Beltre and Prince Fielder who were close to making the Trumbo cut.

**Note: It was not necessarily home run, RBI, stolen base or run totals that kept the above players off these lists. They fell short of Trumbo and/or Andrus in one category or another.**

Since I’ve focused on the stats of Trumbo and Andrus thus far, I decided to get a little more general with the last piece of my analysis. In Daniel’s piece, he mentioned the aesthetics of a .300 batting average and I think that we can agree that thirty stolen bases and home runs as well as one hundred RBIs and runs are similarly pleasing to the eye. With that in mind, I pull all of the thirty home run/ninety RBI and thirty stolen base/ninety run scored seasons in the last three years. I chose to use ninety runs scored and ninety RBIs so as to not focus on the elite of the elite but increase the pool sizes a little bit and compare them. Here’s what I came up with: 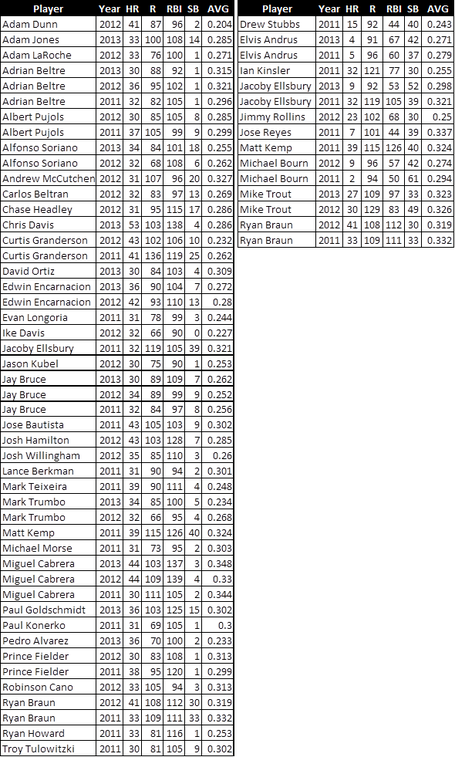 This is the most telling sample in my opinion because we see a much more dramatic disparity between the two groups. If we remove the duplicate names, we find that thirty five players have gone 30/90 in terms of home runs and RBIS while only ten unique players have had a 30/90 season in terms of stolen bases and runs scored. We find that there is a much larger supply of "power" guys than there is supply of "speed" players.

It can be argued that "power" players are more valuable because a power hitter can often contribute to at least four categories while speed players are more traditionally helpful in only three categories. However, the scarcity of players who steal a high number of bases as well as tally large runs totals makes them a valuable commodity. I was lower than most on Andrus and Trumbo coming into last season but I think both are going to continue what they’ve been doing in 2014. Honestly, writing this article opened my eyes about both players and about the misconception that there are more players with a speed skill set than there are with power tools. Hopefully it will help you to dig in a little bit and not take general notions at face value.