The lefty slugger enters 2014 as the Cardinals' likely first baseman. Will he exit 2014 in the same role?

"Open with a joke," they always say, and here's the best one I've seen all week: 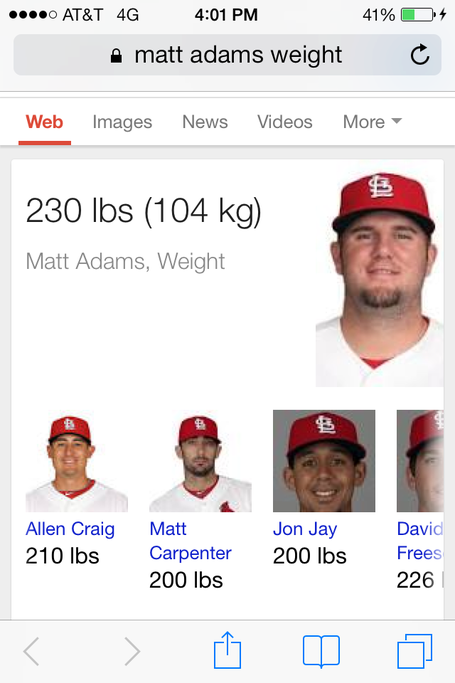 Now, I'm a plus-sized gentleman myself, so far be it from me to mock anyone's girth. But come on now, Matt Adams. Dude. Realistic lies. Dustin Pedroia can claim he's 5'8"; he doesn't get to walk around saying he's 6'5".

(Also, thanks for the super-specific weight listing, David Freese.)

To be fair, Baseball-Reference lists Adams at 260, so that might just be a Google thing. Whatever.

Adams should enter the season as the St. Louis Cardinals' full-time first baseman, with Allen Craig shifting to right field. MLB Depth Charts projects Adams to hit fifth, between Craig and Yadier Molina, in what frankly stands to be one heck of a St. Louis lineup (even if Kolten Wong struggles, Jhonny Peralta as a No. 7 hitter is perfectly nifty). Adams, who put up 17 homers and a 131 OPS+ in 319 plate appearances in 2013, could easily have as many RBI opportunities as any hitter in baseball.

Of course, we are assuming a lot there.

Now, Adams is a lefty masher, and he's 25 years old. There's plenty of time, as he develops in the bigs, for him to learn to hit lefties better. Even if he doesn't, it's not like a weakness against lefties is a career deal-breaker. Shin-Soo Choo is doing all right. Ryan Howard got that enormous contract out of it. Adams has a weakness, but it's an acceptable one.

ASSUMPTION NO. 2: Matt Adams will be the Cardinal first baseman all/most of the year

If Adams were on, say, the Brewers, he'd be the first baseman come hell or high water. But there probably isn't a more complete roster/franchise in baseball right now than that of St. Louis. There's a reasonably set lineup right now that includes Craig in right, Peter Bourjos in center, Matt Carpenter at third, Kolten Wong at second, Adams at first, yada yada yada. But don't forget, Oscar Taveras is in the minors, and for all intents and purposes he's ready. Also, the team added Mark Ellis, and he's a more than serviceable backup infielder. Heck, Jon Jay is still running around back there.

Here's a scenario: Adams struggles in April, while Taveras puts up a 1.500 OPS in the minors. The Cardinals, unwilling to wait on a big boy's bat and needing to do something with this wunderkind, shuttle Craig back to first and slot Taveras in right.

Or this one, starting from the same place: Adams struggles, while Ellis bends Mike Matheny's ear, and the veteran guys like each other. Ellis moves to third, Carpenter slides over to first.

Or Jay in right, Craig at first. Or, heck, I don't know. The point is, there are something like a dozen ways a slow-starting Adams becomes a back-in-the-minors Adams. Heck, maybe they decide Adams' hitting skills don't outweigh his defensive holes. And that's before we consider the possibility that dude gets hurt. He's - being kind here - girthy. Yeah, Prince Fielder is always on the field, but you can't exactly put money on the health of the big guys.

The flip side, of course, is that Craig isn't exactly known for his durability, either. For all the versatility and depth the Cardinals have, they aren't flush with corner infielders; it's pretty much Adams, Craig, Carpenter, and Ellis if you are feeling frisky. Craig goes down, and they might not have a choice but to ride Adams out.

Still, with a team as strong as St. Louis, an unproven young player is hardly guaranteed full-time at bats.

ASSUMPTION NO. 3: Matt Adams will manage to outproduce his peripherals

Adams' good 2013 came in part due to a .337 BABIP. While that's in line with his .332 two-year line and in fact below his minor-league numbers, it's a higher number than we'd expect a bigger, slower guy to produce; his BABIP is higher than Pedroia's career line, for one. His walk rate and contact percentages have been low; his swinging strike rate has been high.

He's still shy of a full season's worth of games and plate appearances, so drawing any hard and fast conclusions from them is dicey. But ignoring them is dicey, too.

Look, I like Matt Adams. You probably do, too. But in our consensus rankings, he's ahead of guys like Nick Swisher, Chris Carter, Justin Morneau, Corey Hart, just to name some names. If you give all those guys the same number of plate appearances, hey, maybe Adams is the top of the group. He certainly has the most upside. But for 2014, we know, barring injury, the rest of that group will have a job all year long.

Adams might. But he only might. If you want him as a lottery ticket, sure. But if you're looking for a low-end first baseman to count on? You could probably do better.