Let's examine Chris Davis to see if his current 1st round ADP will be justified for 2014 or if managers will regret paying top dollar for his 2013 campaign.

Share All sharing options for: Laying off(speed) pitches: Is Chris Davis a bust?

co·a·lesce to come together so as to form one whole; unite

It was a memorable year for the one they call "Crush." Magical even. No one has hit that many homeruns since Jose Bautista in 2010. No one has scored as many runs, hit as many homers, and driven is as many guys as Davis did since 2007 when ARod went crazy for (143 R, 54 HR, and 156 RBI).

The best part of it all? His 2013 Yahoo ADP, for instance, was 160. That's right, you paid, on average a 14th round pick for him. Congratulations; hope you enjoyed it because that's not happening again. This year he'll cost you the #7 overall pick, according to NESN. Likewise, in our ongoing Fake Teams 20-team dynasty league, one of the managers boldly took him at #2 overall. The expectations couldn't be higher for Chris Davis this year, and consequently there's no margin for error. If you're in on Davis you better be all in, because if you're not completely sold on him he will cost you a pretty penny. He will make or break a lot of fake teams this year!

Unfortunately, his plate discipline data doesn't comprehensively back up his performance, although it's clear Davis stopped swinging at everything he was offered last year (i.e., slight decreases in O-Swing, Z-Swing, and Swing%). However, his swinging-strike rate held steady at an atrocious 15.2%, which when coupled with his unappetizing 69% contact rate, point to the fact that the strikeouts and his hack-tastic ways are still very much in play.

Brett Talley did a wonderful piece on why he thinks the homerun totals will regress next year, and I'm inclined to agree (along with almost every projection system out there). The FB% doesn't seem sustainable at 46% due to some basic regression to the mean. So, let's say he hits closer to 40 HR next year, which coincides with the 19 "just enough" homers he hit in 2013 according to ESPN's home run tracker.

However, it seems reasonable to believe that the increase in his walk rate could be maintained as Davis actually improved in this area over the course of the year, walking at a better clip in the 2nd half last year (12.1%) than the 1st half (9.7%) despite only accruing 6 additional IBBs in 2013. Additionally, look at how well he was able to lay off the soft stuff last year, especially the change up, curve, and splitter: 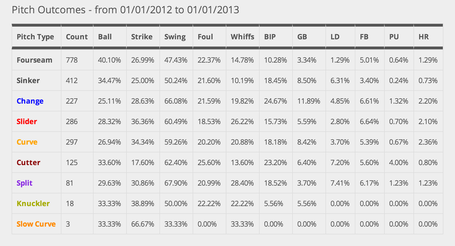 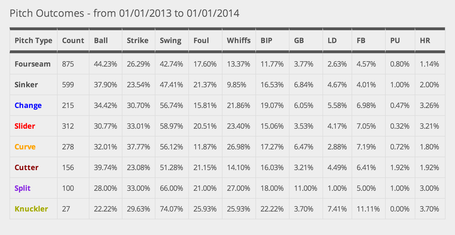 If he can continue to lay off the off-speed stuff, even with the strikeouts, it conceivable that he can maintain a palatable OBP and a decent average. This could be true because his .336 BABIP was right in line with his career average. His career BABIP, however, seems high to me. He obviously doesn't have the speed to beat out grounders, and so one would think to look at his line drive (LD) rate to see if he hits a lot of them (70% of them go for hits typically). However, his career 23% LD rate doesn't support a high BABIP either.

Playing in homer-friendly Camden Yards (114 Park Factor for lefty homeruns) with the #5 overall team offense-which remains largely unchanged from 2013-it is reasonable to think that the counting stats will be plentiful again this year for Crush.

When all is said and done, then, I'd project something in the neighborhood of:

So, considering this is a bust piece, could you really consider Davis a bust for 2014? For me, the answer is a qualified "no," which is to say that unless you are expecting the same results from last year he could retain value, but nowhere near 2013 levels when his ADP was much lower. He'll be 28 this year, and everything about what we're beginning to discover about hitter aging curves is suggesting that a negative downturn in ISO, BB%, K%, and BABIP is coming for Davis.

In this case, then, if you spend a 1st round pick on Davis, you're really going to pay for last year's stats and a declining skill set moving forward. While he could still put up big time power numbers, he could also do a Ryan Howard impersonation any minute, and I don't mean that in a good way. In that sense, then, that's a bum deal for you.

First base is deep but, as Alex Kanteki suggested in his 1b Landscape piece, you may not want to wait at 1b as the gulf between the elite guys and the serviceable guys could be drastic. Personally, I'd pass on Davis, because I don't like anyone who strikes out 30% of the time along with questionable walk rates. Just for fun let's look at all the players who sported a K-rate at or around 30% the last three seasons (2011-13):

Just based on a cursory glance, is there anyone on that list that screams, "Pick me! I'm a first-rounder!" No, those are guys (mainly) who have big power production combined with significant holes in their offensive game. Hey, I'm not going to beat you up if you decide to go early-mid 1st round for him in a redraft league. Dynasty owners, however, I'd be looking to sell right now as the hype and buzz around this guy is creating a "Crush-bubble" which is bound to pop.