The Machine may be a little depreciated but should we really write him off?

The only thing that came quicker than Albert Pujols' decline was the mass exodus from his bandwagon. Experts, fans, analysts and fantasy baseball players were jumping ship faster than Leo and Kate. Pujols' fall from grace has gotten a lot of attention over the last few years and reached a head last season. Pujols set career lows in almost every statistical category including games played and plate appearances. Pujols' skills are obviously diminishing but as they say, "the hate has gone too far". Yes, I do hate myself for using that phrase so you can just save it if you thought about posting a comment about it. But, really, it seems like there are a lot people out there who are focusing on what Pujols can't do when they should pay more attention to what he can do.

At 34, Pujols is no spring chicken and he probably won't continue to average 155 games per season going forward. He's been an extremely durable player throughout his career, however, and I don't see him suddenly becoming Jose Reyes. There are those who believe Pujols is actually older than his listed age, but that is speculation and I refuse to take that into account when considering his performance. What his age may mean is that Pujols may not have the bat speed he once had. Since there are no metrics (at least that I could find) that measure bat speed, I turned to a few other stats to try and find some insight. In 2013, Pujols' SwStr% was the highest it's been since his rookie season which might suggest that he is struggling to catch up to good fastballs or unable to make up for a mistake in pitch recognition. Pujols' weighted runs above average for fastballs was the lowest it's ever been and although he swung at fewer pitches outside the strike zone than in 2012, the rate was above his career average.

I took to Brooks Baseball to see how he fared against "hard" pitches over the last six seasons. The figure below shows hit batted ball distribution on "hard" pitches since 2008. 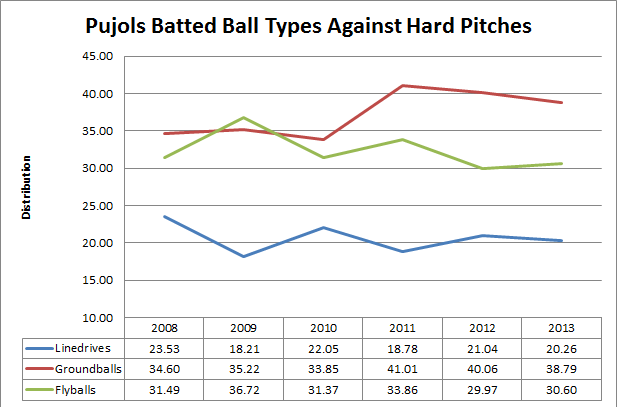 We can see from this chart that Pujols was able to square up hard pitches at roughly the rate as he has for his career as evidenced by a 20.26% line drive rate. Pujols' career line drive rate is 19% which is slightly below the normal league average that usually hovers around 20%. Pujols' line drive rate has climbed for the past three seasons. His fly ball percentage has also increased and, normally, this trend would be encouraging but Pujols' HR/FB has fallen during the same time period and when we consider the dip in doubles per at bat, we can conclude that these fly balls are resulting in outs more often than they have in the past. His average fly ball distance is not what it once was but was a respectable 287 feet in 2013 which was farther than Justin Upton, Anthony Rizzo, Domonic Brown and Mike Trout. Furthermore, we can attribute some of Pujols' BABIP struggles from last year to this change.

Even with his troubles last year, Pujols was on pace for 25 home runs and 90 RBIs. Last season there were only 5 first basemen who reached those numbers. While it was the worst rate of his career, Pujols' K% was second best among first baseman and he still walked more than league average. According to a study by Jeff Zimmerman, strikeout rates increase from ages 31 to 34 and plateau thereafter which suggests that Pujols should remain a strong contact hitter. He may not hit .300 again, but I believe a line very close to his 2012 numbers, a year in which he finished 6th among first basemen on ESPN's player rater, is a very real possibility.

I don't think 2013 is a fair sample to use when evaluating Pujols and projecting his performance in 2014. He had knee surgery in the spring before the season and played through plantar fasciitis for a portion of the season before missing the last two months of the season. Anyone who watched Pujols could tell he was uncomfortable and I was actually a little surprised he played with the injury as long as he did. While a lot people have acknowledged the fact that Pujols was hurt last year, many of them seem to be discounting the effect it may have had. I do not know the extent of Pujols injury but a simple WebMD search returns the following:

The plantar fascia camera is the flat band of tissue (ligament) that connects your heel bone to your toes. It supports the arch of your foot. If you strain your plantar fascia, it gets weak, swollen, and irritated (inflamed). Then your heel or the bottom of your foot hurts when you stand or walk... Most people with plantar fasciitis have pain when they take their first steps after they get out of bed or sit for a long time. You may have less stiffness and pain after you take a few steps. But your foot may hurt more as the day goes on. It may hurt the most when you climb stairs or after you stand for a long time.

I'm not a doctor but I would think that an injury that fits the description above could have an extreme effect on a baseball player. Pujols DH'ed in 65 games last year in an attempt to reduce the pain and swelling but if it hurts to stand or walk imagine the pain when planting your front foot or turning your pivot foot to whip your hips through your swing. Think about sprinting to first base and then running the bases. Consider wearing cleats every day and walking on hard surfaces like the dugout floor or base paths. I think you get the drift and I may be overdoing it a bit but the situation is worth understanding.

There's no doubt that Pujols is not the hitter he used to be. His strikeout rate was the highest of his career last year as he swung at more pitches outside the strike zone than ever before. His HR/FB rate dropped for the 4th straight season and his ISO was fifty points below his previous career low. His walk percentage was higher than 2012 but lower than every other season and he posted a .258/.330/.437 line. Pujols, who averaged 155 games played for the first twelve seasons of his career, played in only 99 games. It's apparent that when we compare Pujols to what he once was, he comes up short. Fortunately for the current version of The Machine, other teams do not have players doing renditions of the former.

Reports are that Pujols is feeling great so far this spring. He will be, once again, hitting behind Mike Trout and, while I'm not a huge fan of his, Josh Hamilton is bound to be a little better than last season. The Angels still have the talent to put up runs in big numbers. This article may have sounded like a lot of "He might not do this anymore, but he can still do that." That's because I think it's unfair to evaluate Pujols against himself and we need to strip the name from the stats and recognize that, compared to the alternatives, Pujols is a still a top 10 first baseman.