What can we expect from the young Cubs' first baseman this year? Will 2014 finally be the year of the breakout or should expect more of the same?

Recently I went to watch the second installment of The Hobbit here in Argentina. I went to see it in 3D because I thought it would enhance my viewing pleasure. Sadly I was disappointed. Sure the flying bumblebees and whizzing arrows were exciting to watch fly through the movie theater, but the glasses themselves left the rest of the screen a hazy mess and the overall crispness of the battle scenes left much to be desired. While I wanted to believe that the 3D specs would improve my experience, I've been disappointed every time.

So, despite their shortcomings, let's put on the magic glasses to see if we can discover something about Anthony Rizzo that will make us pay extra for admittance to the show, so to speak, in 2014. After approximately 1200 plate appearances from Rizzo in the majors, we have to ask ourselves what do we actually have in the first baseman from the north side of Chicago for this season?

So we've validated that he's got a good eye and can talk walks, however his career average sits at .238, which is, in a word, awful. Before pointing to his .258 BABIP in 2013 as the culprit for his low average, note that his career BABIP only sits at .270. There is no doubt that his inability to hit LHP is contributing to this problem, especially it seems LHP away from Wrigley (.261 batting average vs. LHP at home, and .132 BA vs. LHP away). He sports a career .194/.270/.347 line against lefties, which stems in large part from the weak contact he generates against them, 16.3% line drives against LHP versus 22.3% against RHP, and a 13.8% versus 6.3% infield fly ball rate against lefties and righties, respectively.

Let's look at the following heatmaps (vs. RHP and LHP) to see if we can discover anything about Rizzo's problems with lefties: 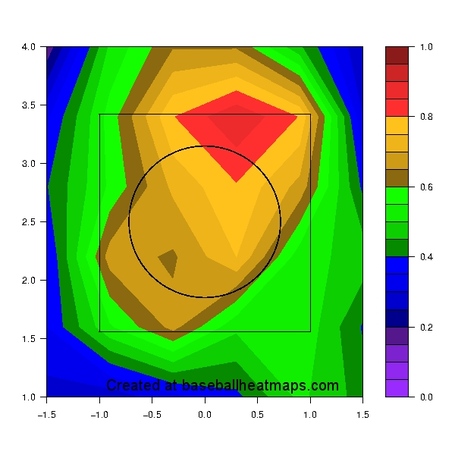 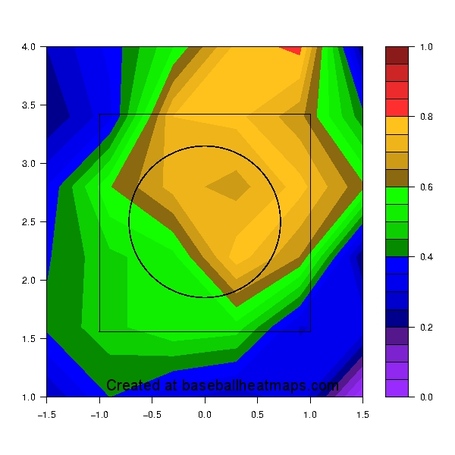 Look at how much coverage Rizzo gets against RHP middle/low and away versus LHP? The book has undoubtedly gotten around that if you can keep the ball down and away as a southpaw Rizzo can't do anything with it. Fortunately, the overall BB and K-rates remain constant against both lefties and righties, yet it remains to be seen whether Rizzo will begin to make better contact against LHP. This will ultimately limit his upside.

Furthermore, the spray charts corroborate the evidence that, versus lefties, he's getting a lot of weak infield popups and lazy fly balls to left, whereas harder contact (LD% in red) is being made to all fields versus righties. 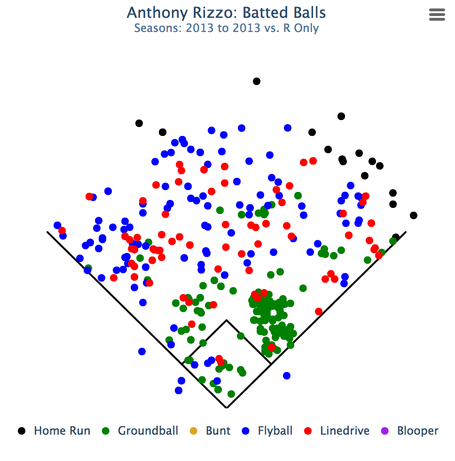 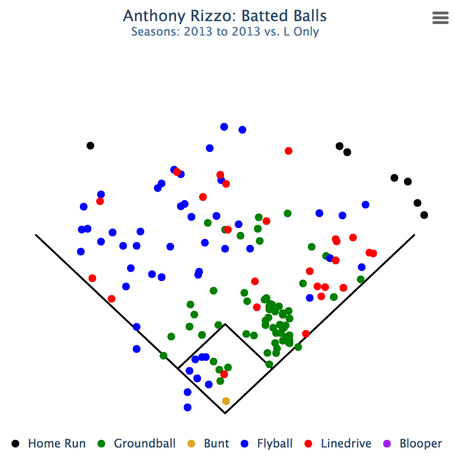 On a positive note, Rizzo looks to be improving his overall plate discipline numbers as his swinging-strike rate has improved every year since 2011 (8.8% in 2013), and he cut his O-Swing% (the percent of times he swung at pitches outside the strike zone) from 38.5% to 30% last year. So, it appears that Rizzo is becoming more comfortable at the plate in identifying pitches that would be good to hit versus chasing pitcher's pitches. Overall, he is swinging less overall as his Z-Swing% and Swing% rate dropped 6%. This is in line with the 4% jump in walk rate (from 7-11% in 2013). In this case, then, the plate discipline numbers may represent somewhat of a silver lining in what is an overall average profile thus far.

Scouting reports seemed to agree that Rizzo would take some walks , hit for a decent average, and have a effortless swing with good bat speed which could produce at least line-drive power if not plus power in the future. Were the pundits right?

So far Rizzo has a career .174 ISO rate and .412 SLG, which places him at #30 overall for first basemen with at least 1000 plate appearances from 2011-13. His decline in batted ball distance, which corresponds nicely with HR/FB rate, is not encouraging for 2014:

Some have argued that Rizzo playing half his games in Wrigley will be an asset to his power as a left-handed batter, except that the Cubs' home ballpark has played distinctly average in allowing home runs to left-handed batters (same park factor as Comerica Park and Turner Field). So, it's probably time to dismiss that piece of mythology.

After all is said and done I cannot find any reason to believe that there's a sudden power surge coming in Rizzo's future. He is "trending" (and I use that term ever-so-slightly) in the wrong direction based on batted-ball distance and HR/FB rates regressing toward the mean. Wrigley will not hurt nor help him in that department either. Considering new understandings about power and aging curves from Jeff Zimmerman at Fangraphs it looks, at this point, barring some mechanical or mental fix, Rizzo is what he is as far as power goes.

The Cubs were 28th overall in team batting last year, scoring just over 600 runs (they beat the other Chicago team by 4). With a lineup projected to look like the one below, 2014 could look just as ugly in the counting stats department:

Maybe Theo & Co. know something that I don't but if Rizzo doesn't figure out his problems with LHP and continues to be what he is, I wonder if there might be a few changes next year in the form of a) a platoon partner, or b) a trade to open up space for Dan Vogelbach later in 2015.

It remains to be seen if Rizzo will ever become the middle-of-the-order bat that some predicted he would be...in real life or in fantasy. For me, the experience with The Hobbit 3D mirrors my viewpoint of Rizzo: flashes of excitement but overall murky and disappointing.

Have I missed the mark somehow on Rizzo? Opine below in the comments and/or follow up with me on Twitter (@agape4argentina).