As a follow up to his article on the Disappearing 30 home run hitter in baseball, Ray details the spiraling number of hitters who score 80 runs and drive in 80 runs. The drop is startling.

A few days ago, I wrote about the decline in the number of 30 home run hitters in major league baseball. Today, I am going to give more evidence that offense is down, and why you might want to consider drafting ace starters in the EARLY rounds of drafts this season. Now this strategy really goes against my personal beliefs on how to construct a championship fantasy team, as I have always been in the camp of drafting hitting, hitting and more hitting. That may change this season.

Here's why. In addition to the decline in power, and the 30 home run hitter, we have seen the number of hitters who score 80 runs and drive in 80 runs decline over the last few years. I am not sure if it is/was a popular strategy to target these types of hitters, but it seemed every time I read a chat at other sites, or even here at Fake Teams, people were discussing hitters that score 80 runs and drive in 80 runs, thus the reason why I used those two data points.

Below is a graph of the number of hitters who both scored/drove in 80 runs over the last 10 years: 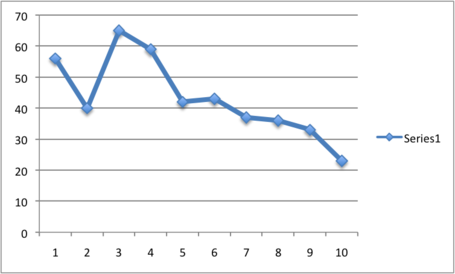 Quite ominous, eh? As you can see, in this 10 year period, offense peaked in 2006 and started a slow drop until recently. The number of hitters that provided 80 runs and 80 RBI for fantasy owners has been cut from a high of 65 in 2006 to just 23 last season. With run production down over the past few seasons, it's becoming harder and harder to draft hitting over pitching and I think 2014 might be the year where you see more starting pitchers taken in the first round, and early rounds, than ever before.

Maybe 2014 brings a change in the downward trend in offense, but I can't help but think that the effort by the MLBPA and MLB to remove PEDs from the game has something to do with the drop in offense over the past few seasons.

Let's hear your thought on the data presented here. Tomorrow I will detail some of the early ADP trends for starting pitchers.