Brian Creagh takes a look at what age and level is a prospect's performance truly extraordinary.

Share All sharing options for: Prospect Evaluations: Age vs. Level

I wanted to post this quick visualization in the hopes of starting some community discussion around when a prospect's age relative to his level begins to hurt or help his stock. Andrew has mentioned multiple times in his articles and in podcasts that age relative to performance/level is a large component of his evaluations, and I wholeheartedly agree. The difficulty is trying to quantify what ages and at which levels does this truly becoming a selling point. The chart below plots all minor league prospects in 2013, the level they played in, and the age at which they played. I pulled the data using a minimum of 10 PA's per level so that we would have a representative sample size to pull from. The black dotted lines represent the average age of players at that level, and the grey dotted lines represent the age 1.28 standard deviations away from the mean. Why 1.28 standard deviations? Because assuming a normal distribution (which we are fairly close to here) we would expect 10% of our sample to be below 1.28 standard deviations from the mean - in other words, we would expect 10% of the league to be younger than the age listed next to the grey line. Let's take a look at our results (click image to zoom): 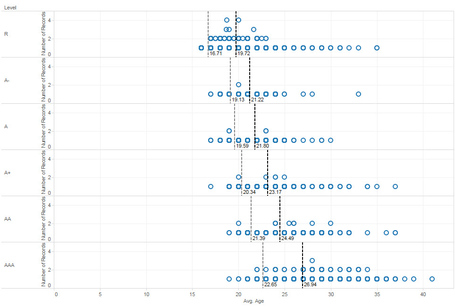 The table below represents our findings.

From these "Age Thresholds" we can start to create a baseline for when a player's performance is truly extraordinary when compared to the age/maturity of other players in the same league. This comes with the typical prospecting caveat that every player develops differently and on his own schedule, but having a framework to start our evaluations from is critical for unbiased scouting.

So what do you guys think? Does this pass your initial sanity test? Is 10% not "special" enough and do we need to be looking at a more rare subset of players?