One of the more surprising, under-the-radar performances of the 2013 season is Tyson Ross of the San Diego Padres. His 3-7 W/L record does not accurately reflect the success we have seen from Ross, and it will likely suppress his ADP in 2014 drafts. I suspect Ross will be on many sleeper lists in 2014, so let’s take a deeper look at Tyson Ross’ 2013 season to see what type of performance we can expect in 2014 and beyond.

These are charting all starters in 2013 and how their K%, F-Strike%, and GB% relate to their FIP. Notice that for each variable, the overall trend holds that the larger the value, the lower the FIP – it isn’t the tightest correlation, but it’s enough of a trend to take action on. So translating this to Tyson Ross’ numbers, let’s take a look at how he stacks up to the rest of the league. The following visualization plots each pitcher in 2013 by K% and FIP. The size of each plot point is representative of their GB%, and the color relates to their F-Strike%. 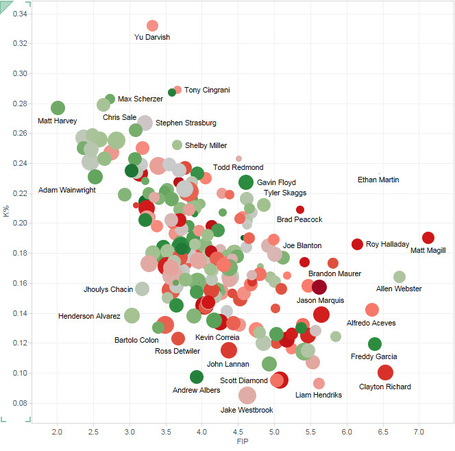 This first chart shows all starters in 2013.

This second chart zooms in on the upper left quadrant where the best SP’s in 2013 reside. 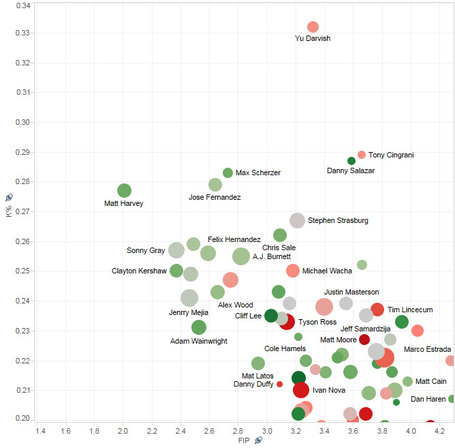 To highlight where Ross is located, I used this viz here. 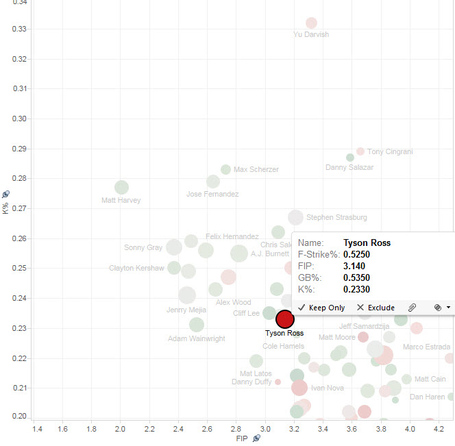 Ross measures up with the top SP’s in all variables but one – F-Strike% (the variable determining color). He holds one of the worst F-Strike% on the entire chart, next to Ivan Nova, Matt Moore, and Felix Doubront (take a look at the other red dots to illustrate my point). His lack of command will always hold him back from being a Top 50 SP, but I think the Ivan Nova/Felix Doubront comps are pretty accurate. He has the "stuff" to strike out close to a batter per inning, so he’ll always be worth owning, but he will be susceptible to the blow-up starts that will kill you in a H2H week.

Another red flag in my analysis of Ross is his increased dependence on sliders in 2013. In his past three years, Ross has gone from 20.5% to 26.0% to 32.3% sliders and I wonder if some elbow injuries are in his future. It’s tough to predict injuries, so I wouldn’t put too much weight into this, but it is something to keep an eye on if you’re considering locking him up for the next couple of years in a dynasty league.

The biggest question mark surrounding Tyson Ross’ success is his luck peripherals. His .279 BABIP, 73.5% LOB%, and 6.8% HR/FB% hint at future regression, but he hasn’t thrown enough innings to establish baseline levels to compare against. A 6.8 HR/FB% is easily sustainable when pitching in PETCO, and the increased reliance on sliders and a 2 MPH jump in fastball velocity could explain the suppressed BABIP. It’s tough to suggest how to act on this data, but I’m betting on regression.

Tyson Ross has provided excellent value to owners in 2013, and he should continue to be cheap in 2014 due to his poor W/L record, but I wouldn’t put much stock in him. He figures to always be on the unlucky side of the W/L record pitching in San Diego, so I suggest staying away in 2014 and selling high this off-season.