Jason Hunt covered the San Jose Giants-Stockton Ports game on 7/27/13 from the press box, and came away with some observations on Addison Russell, Mac Williamson, and James Simmons.

July 27th was a first for me, as I covered a minor league game from the press box rather than just from the seats. The bonus of this comes from the fact that I was able to get into the park early enough to see batting practice and infield for both teams. While the quantity of high-end prospects on the two teams was low, it was still a very interesting experience to be on that side of the game. Thanks to my hosts, the Stockton Ports and Jeremy Neisser for issuing a press credential to me.

Note: I would refer to what I saw more as observations than scouting, mostly due to not having any formal training in scouting. After trying to concentrate on everything that is going on during the game, it's abundantly clear to me that there is still a lot more to learn. 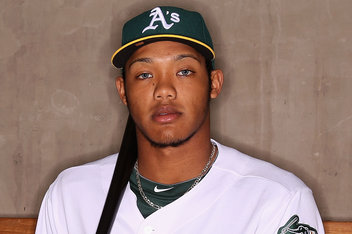 My hope had been to see A's top prospect Addison Russell in person in game, but he had been out since the 17th with a hand bruise. Unfortunately, Russell did not play on Saturday, instead coming back on Sunday. However, with my access came the ability to see him take batting practice and infield.  When I started watching looking around at the players on the field, Russell seemed to stand out, and to be honest I'm not sure I can exactly explain why. He just seemed like he had a more athletic build I guess, at least given some of his teammates.

When batting practice started, his talent became even clearer. Russell seemed to be actively trying to hit some of the pitches out of the ballpark, and I counted at least 4 that he did that with. All four went to either center field or right field, which I found interesting as well. In general, he sprayed most of his hits to all fields, and really was not pulling very many of them. You can take a brief look at his BP session in the video below (unfortunately, from my angle, I had quite a bit of footage of the manager of the Ports hitting grounders which crossed the view of Russell).

After his BP session was over, Russell went out to his position, alternating with the evening's starting shortstop Wade Kirkland. Russell showed off an excellent arm, although at times it wasn't accurate when he hurried throws. His actions looked pretty smooth as he took grounders, and generally showed the athleticism we had read about previously. Based on what I saw there and other reports about him, I can see why it is anticipated he stays at shortstop in the long-term.

Here's some video I shot from that day of Russell:

Simmons has fallen off of prospect radars at this point, as he is now a 26 year old who is trying it again as a starting pitcher in High-A.  A first round pick back in 2007, Simmons has muddled his way through the minors these past 6 years, including a year missed due to Tommy John surgery and a couple of different seasons as a reliever. His future seems more likely to be in the bullpen, as he features a fastball and curveball combination. The curveball showed an 11-5 break and was inducing either weak contact or complete misses from the San Jose hitters. However, the fastball was topping out in the high 80s according to the kids charting the game for San Jose, and didn't really seem to be fooling very many of the Giants' hitters. To be honest, I'm not sure at this point that I see a Major League future unless that fastball ticks up more.

Williamson is a 2012 draftee by the Giants who was known at the time for his power and what sounded like a suspect hit tool. Baseball America even rated his power as potentially plus-plus this offseason, and he crushed a pair of home runs in the game that evening. He was the DH that evening, although he has been playing right field primarily this season. At this point he's just an interesting name to file away, as he could be extremely interesting if he can keep his hit tool working well enough to let his power play when he moves out of the California League. If he can get enough out of his hit tool, it sounds like the rest of his game would play up to the point where he could be a starting corner outfielder in the future. Baseball America recently rated him as the best power prospect in the California League.