San Francisco pitching prospect Kyle Crick is putting up gaudy numbers in the hitter's paradise that is the California League. Will he become yet another front of the rotation starter for the Giants?

When it comes to prospects, certainties do not exist. Every prospect has a wide range of outcomes between his ceiling and floor potential, with most players settling somewhere in between the two. I like to think of prospect outcomes as the Dream (the player's ceiling), the Nightmare (the player's floor) and the Reality (weighing all the factors to come up with the most likely outcome). Throughout the year, I will be examining the ceilings and floors of players across the minor leagues, and making my best forecast on the eventual outcome. Today we examine San Francisco Giants' pitching prospect, Kyle Crick. 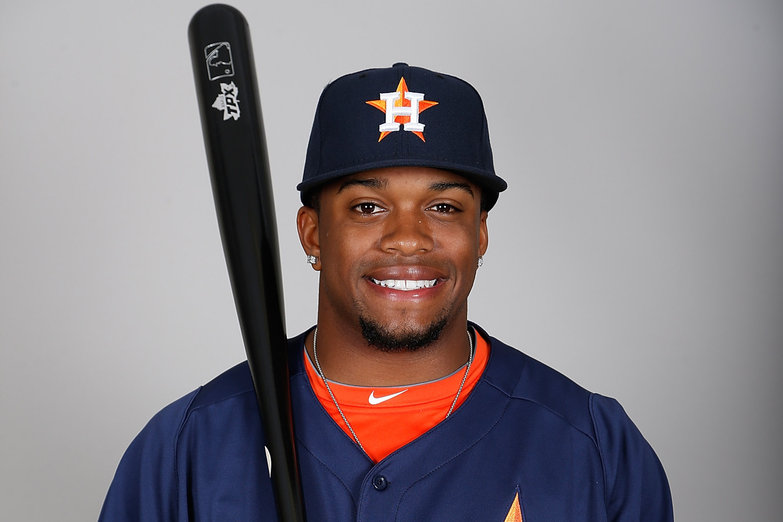 Craig Goldstein takes a look at the Astros' speedster and his fantasy future.

Since being drafted 49th overall in 2011, Crick has cemented himself as next top prospect in a never-ending supply of Giants' pitchers that has included Tim Lincecum, Matt Cain, and Madison Bumgarner. While he is a different animal than his predecessors, Crick has an upside that is comparable to each of them. To start, the lanky, Texan righty has one of the better fastballs you'll see from a young player, a heavy heater that typically sits in the mid 90's and touches 99. He throws it from a H3/4 to 3/4 arm slot, utilizing his tremendous arm speed to pump the pitch by hitters deep into games. In fact, if not for the fastball, Crick might not be a pitcher at all. Through his junior year of high school, he was a standout first baseman that rarely took the mound, that is until he hit 94 mph at a summer showcase and some wise folks advised him to give pitching a try. Because of that, he still is rather new to pitching and it shows with both his command and his delivery at times. He also is still developing his deuce, an overhand curveball that managers of the SAL rated the best breaking-pitch in the league last year, in spite of the somewhat sporadic use and results of the pitch, when it's on, it's a swing and miss offering with two-plane break and good velocity, but it's still inconsistent. As expected, the changeup lags well behind his top two pitches, but that should develop with in-game repetition. And even with his relative inexperience, Crick has been dominating in the minors thus far, registering a 2.28 ERA and 10.94 K/9 over the last season and a half between Augusta and San Jose. Considering he's having this much success while he's still very much a work in progress, it's no wonder that he looks like a solid bet to become a future number two starter.

Although Crick has nearly an endless list of positive qualities, the two big knocks on him are quite worrisome. What may eventually hold Crick back, is his poor control and command. The 20-year-old has struggled with walks throughout his career, issuing just under six free passes per nine innings. Part of that has to do with his inexperience on the mound and the inconsistency of his delivery, but either way he has shown very little improvement in throwing more strikes and also throwing more quality strikes. And he doesn't help himself as often when things start to go wrong, Crick resorts to overthrowing which only compounds the problem. Here you can see some footage of him with Augusta last year, courtesy of Mike Newman and Roto Scouting.

In the video you can see four minutes of exactly what Kyle Crick is. You can see the effortless velocity, the life on all of his pitches, and the physicality he exudes on the mound, but you can also see Crick's propensity to leave balls up in the zone, the failure to get extension on his curveball, the lack of balance at his release point, and a different delivery throughout. It may seem like many pitchers have shown extreme control problems early in their careers before settling down, but in reality the success for pitcher's like Crick is very limited. Even the more successful pitchers with "control" problems like Clayton Kershaw and Scott Kazmir never had BB/9's over 5.0 in a minor league season. So Crick has a long way to go before he can be taken seriously as a frontline starer. If he can't cut back the walks, Crick may never make it out of the upper minors, or at the very least he may have to move to the pen.

In my midseason top-100 prospect list, I slotted Crick in at number 71, which turned out to be one of the more controversial rankings judging by the reaction from readers. Truthfully, I understand the excitement, but I think too many of his supporters are ignoring the very real, present flaws he has, and instead only focusing on the dream of what he can be.There's simply no guarantee that he will ever develop the necessary pitchability to really be successful at the major league level. Crick's minor league walk rate sits at 14.9%, a far cry from the 7.8% major league average. Even with a drastic improvement, no easy feat as he faces better, more advanced hitting, Crick will almost assuredly have to overcome extra men on base his entire career. The two things he has in his favor are his athleticism and the Giants' track record with recent pitchers, but I do remain skeptical that he'll ever sniff his ceiling. More likley, Crick will continue to develop his offspeed stuff and become a back end starter in the Jonathan Sanchez or Oliver Perez-mold. He will have flashes, sometimes extended flashes, of brilliance, but every time out he'll be playing with fire because of his inability to limit his free passes. In the real world and in fantasy baseball I expect Kyle Crick to become one of the more maddening pitchers in the game, a tantalizing talent that will always leave his owners wanting more.

For more on the Giants and their prospects, be sure to check out McCovey Chronicles.