Deep League Thoughts: In which I try to hype Edinson Volquez

Volquez, moving to the Dodgers now, could be a serious lottery ticket down the stretch. Or he might not. But he might!

Share All sharing options for: Deep League Thoughts: In which I try to hype Edinson Volquez

Okay, in addition to having a newborn baby girl (as of Tuesday, congrats), Nate is the commissioner of my primary baseball and football leagues. Oh, and he's my boss at work.

Basically, if there's anyone whose opinion I should respect and pay attention to, it's his. Not that I don't try to screw him in trades whenever possible (got Ray Rice from him for LeSean McCoy just this week), but if I go to him with a question and then disregard that advice, I do so at my peril. 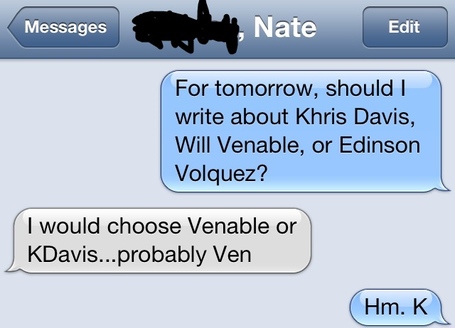 But screw Nate, I want to write about Edinson Volquez.

Look, it would be easy to write about Khris Davis. A .318/.388/.674 slash line in 41 games, with guys like Jean Segura, Jonathan Lucroy, Carlos Gomez, Norichika Aoki, and Juan Francisco hitting around him, should be owned in more than the 41% of leagues he is owned in Yahoo. Ryan Braun isn't coming through that door anytime soon; the job is Davis' through the year at the least.

And it would be just as easy to write about Will Venable. He's staring down the barrel of a possible 20/20 season, with a slugging percentage over .500 and a career-high batting average. Venable is owned in a few more leagues than Davis, at 61%, but that number could easily skyrocket without being at all unfair.

Those are easy, though. I basically crammed two entire columns into the last two paragraphs. I've really got to flex my persuasion skills if I'm going to convince you that Edinson freaking Volquez is fantasy-relevant going forward. (Full disclosure: I really hoped Nate, a Reds fan who, at one time at least, would have picked Volquez, would still harbor fond feelings for him, because, while Davis and Venable are easier, writing about Volquez is more fun. So my rebellion is really Nate's own fault.)

Volquez was just signed by the Dodgers after being designated for assignment by the Padres earlier in the week. He's 9-10 with a 6.01 ERA and a 1.67 WHIP this year, worst in the majors in earned runs allowed. But in Los Angeles, it looks like he'll get the #5 starter gig for now, slotting in after Clayton Kershaw, Zack Greinke, Hyun-Jin Ryu, and Ricky Nolasco, with Chris Capuano apparently being dropped from the rotation on account of being Chris Capuano.

So right away, here's a point in Volquez' favor - the Dodgers? Hit way better than the Padres. He somehow earned 9 wins in San Diego despite you, me, and my nephew being fully qualified of being in their lineup; with Yasiel Puig, Hanley Ramirez, Adrian Gonzalez supporting him, there's a fine chance Volquez' run support goes way up.

I have no idea if there's anything to this, but in Volquez' first six starts (about the number he'll have with the Dodgers, if he stays in the rotation) in Cincinnati, he had a 1.27 ERA and 42 strikeouts in 35.1 innings; in San Diego, it was a 3.65 ERA with 34 strikeouts in 37 innings. Frankly, Volquez was a fine pitcher in San Diego last year until last July, when, after six straight outings of 109 pitches or more, his August and September were basically disastrous.

It seems anti-sabermetric to say, but Volquez appears to come to a new organization with something to prove, something to show. If there's even a hint of that with the Dodgers, pitching in that park with that (presumed) run support, Volquez might be an end-of-season surprise. This is super-deep-sleeper territory, if you're seeking an end-of-season home run or something, but Volquez is owned in only 4% of Yahoo leagues, and, while it could easily blow up, there are innumerate fantasy teams at this point in the season who need a serious home run if they want any chance at their title.

Anyway, Volquez joining the Dodgers gave me the chance for this tremendous joke on Twitter Thursday night (and, if you need a frame of reference for this joke, click here):

Anyway, if you're hovering around third in your roto league, or if you've lost Matt Harvey, or just want to take a shot, Volquez might give you a chance. Emphasis on "might." It's a long shot. But it's possible.

Or maybe it's not. But even then, I included those Davis and Venable paragraphs.

<li><a href="http://www.faketeams.com/2013/8/28/4664030/taijuan-walker-mariners-callup-start-friday-astros?utm_source=faketeams&utm_medium=nextclicks&utm_campaign=blogs">Taijuan Walker to start for Mariners on Friday, likely has a few starts left</a></li>