Highlighting all the action from last night's games, including the dominance of a trio of rookie hurlers, and an almost cycle by Brandon Belt.

With Ray still on vacation, and now Jason Hunt (who has done a great job all week) also out, I'm stepping in to do our Roto Roundup one more time. But enough with the awkward intro, let's get to the action on the field!

Actually, first let's get to something way off the field. After a week-long layoff, the Fake Teams podcast returned. Zack and I covered all the news from quite possibly the most boring trade deadline of all time, as well as discussing the staff's midseason shortstop ranks. Below are two different links to the podcast, and if you're an iTunes listener, please take the couple minutes to review us. Thanks!

The NL Rookie of the Year Race heats up

Last night, not one, not two, but three NL rookie pitchers delivered strong performances, further displaying the depth of talent in the senior circuit this year. The Cardinals' Shelby Miller fired 5 scoreless innings before tiring and giving up a three-run homer to Joey Votto in the sixth inning. Still, Miller finished the game with 8 strikeouts and he improved to 11-7 on the season with the victory. For the season, the big Texan righty owns a 2.89 ERA (3.09 FIP) and he's stuck out 135 batters while walking just 35 in 121.1 innings. 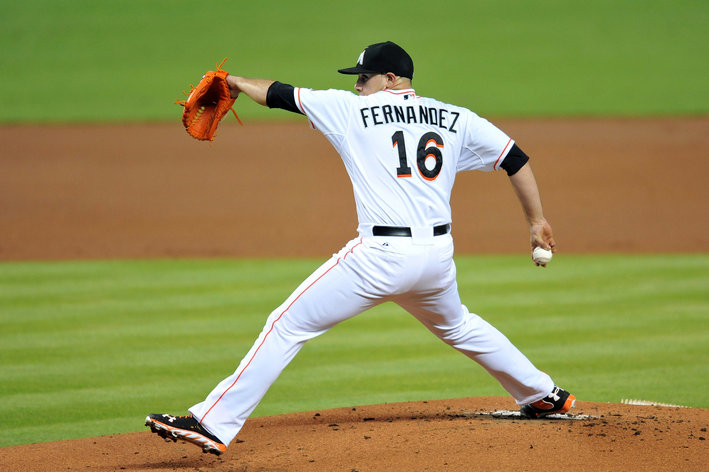 Check out the recap of Fernandez's dominant performance from our friends at Fish Stripes.

Not to be outdone, 20-year old Jose Fernandez shut the Cleveland Indians out for 8 masterful innings, allowing just 3 hits and 1 walk, while fanning 14 batters, giving him back-to-back 8 inning 13+ strikeout games. Remember when everyone was questioning Miami's choice to rush Fernandez to the big leagues out of spring training? It looks like the Fish knew what they were doing, and he's only getting stronger as the season wears on. In his last 10 starts, Fernandez has only allowed more than 2 earned runs once (3 earned in a start against St. Louis on 7/7) and he's lowered his ERA from 3.17 to 2.54 (2.80 FIP) on the season. Despite Shelby Miller's terrific numbers, Fernandez is the clear leader for Rookie of the Year right now, and if not for an innings cap he would have a shot at the NL Cy Young award as well. For the rest of the season I'd rather have Miller because I think St. Louis is more likely to continue using him in a playoff hunt, but long-term you'd be hard pressed to find a more attractive pitcher than Jose Fernandez.

And while not quite in the same category yet, Astros' starter Jarred Cosart shined yet again, allowing just 1 run over 7 innings against the Twins. According to ESPN Stats and Info, that makes Cosart just the second pitcher in the last hundred years to begin his career with four outings of 6+ innings and 1 ER or less and he now has a 0.96 ERA. Impressive as that is, he also has more walks than strikeouts so I think he's in for a stiff change once some balls start falling in for hits.

Tom Wilhelmsen out as Mariner's Closer

After allowing 4 runs without getting an out in a non-save situation against Boston Thursday night, Seattle has announced that Tom Wilhelmsen will not get save chances for the forseeable future.

The committee tag line isn't what any fantasy owner wants to hear, especially if you're looking for saves, but unfortunately that's all we've got for now. Some speculate Oliver Perez (yes, that guy) will get a shot, yet if I was speculating in the Seattle bullpen I would add Danny Farquhar (35% K-rate, 2.07 FIP) until we have more information.

More on the Mariners from: Lookout Landing

Brandon Belt finished a double shy of the cycle

Belt finished 3 for 4 with a single, triple, and his 11th homerun of the year in last evening's win against the Rays. Belt has struggled to live up to mighty expectations thus far in his young career, but he has quietly been playing very well for a long period of time now. Overall he's now up to a .261/.337/.444 line and he brings an element of speed that other first baseman don't, aside from Paul Goldschmidt and Eric Hosmer. If he's available in your league, don't hesitate to add Belt.

More on the Giants from: McCovey Chronicles

Chris Crush Davis became the first player to hit the 40 homerun marker this season with a third inning homer off of Aaron Harang. Davis seems to be regaining his stroke after a little bit of a dry spell, and I still think he's on his way to 55 jacks this year.

In the same game, Kendrys Morales delivered a 4-4 night with his 17th homerun. Morales is quietly having a really nice first season with the M's, hitting .298 with 63 runs driven in so far. There's no reason he can't continue to be a top-15 1B the rest of the way.

Bryce Harper homered again, his 16th big fly of the year. Harper has now hit a homerun the night before everyone of my Roto Roundups, a trend that I feel is likely to continue.

That's it for today, thanks for reading!