The Astros passed on Mark Appel in the 2012 draft, opting for Carlos Correa instead. His return to the 2013 draft gave them a second chance to take him, and they brought the hometown kid into the fray quickly. What does his fantasy future look like, and when could it happen?

Mark Appel fell in the 2012 draft due in part to signability concerns, and opted not to sign with the Pirates at the #8 overall pick. It was definitely a calculated gamble, as Appel was leaving well over $2 million on the table and banking on his ability to stay healthy and also produce at the level that made him a likely top pick to begin with. It's clear now that it worked out, as he was taken first overall by the Astros a year after they passed on him at the same pick. What does his path to the Majors look like, and when could he arrive there?

Appel actually grew up not far from where I did, attending Monte Vista High School in Danville, CA. The Tigers took a flier on him in the 15th round of the 2009 draft, but Appel opted to attend Stanford instead and did not sign. Fast forward three seasons (including a 10-2, 2.56 ERA, 130 strikeout performance his junior year), and Appel was viewed widely as one of the top potential picks in the 2012 draft.

Appel was anticipated to be the top overall pick pretty widely as we approached the draft, and as we got closer to the draft it seems more likely that he would land in Houston. However, amid concerns about signability, Appel didn't go at #1 to the Astros, with the team opting to take Carlos Correa instead. This was when the free fall started, as teams had not planned on Appel being available for them to take, and unsure of what it might take to sign him, opted to pass and go with their original plan instead. As a result, Appel landed at the #8 pick of the Pirates. However, due to the new spending caps that were a part of the most recent collective bargaining agreement, the Pirates were limited in their ability to offer Appel the amount he had been seeking when he was expected to go first. Failing to come to an agreement with the Pirates, Appel returned to Stanford for his senior year.

While anyone would be within their rights to worry about what could happen by not taking the money in front of him, Appel returned to Stanford and quieted those doubts. It was another strong year for Appel in 2013 as he went 10-4 with a 2.12 ERA and 130 strikeouts over 104 innings pitched, and he came into the 2013 draft viewed as one of the top 3 picks at worst. The Astros selected him this time, and signed him to a bonus of $6.35 million this time around.

Since signing, the Astros gave Appel two starts in their short-season affiliate in Tri-City, where he threw five innings before being promoted to full-season Low-A Quad Cities. Through yesterday's start, Appel has thrown 33 innings there, allowed 30 hits, struck out 27 and walked 9 while posting an excellent groundball rate (2.04 GO/AO). It is expected that his start on Sunday would be his last start of the season, based on the comments of Astros' General Manager Jeff Luhnow from a few weeks back. 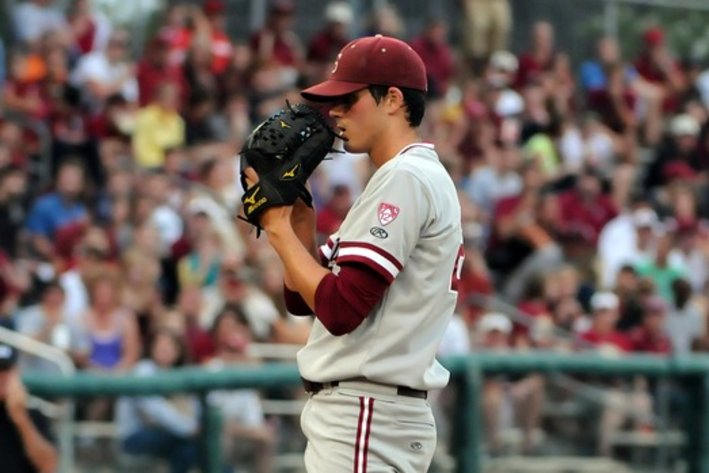 A pre-draft look at Mark Appel.

Appel is another pitching prospect who is considered to have top of the rotation potential, both for the Astros and fantasy owners. Appel features three pitches as a part of his repertoire:

Overall, his repertoire is expected to be very strong when he reaches the Majors, as all three of his pitches profile as ast least average with the potential for all three to be plus or better, with good command of all of them. His delivery is extremely repeatable, and appears to be low effort. He is also given high marks for his baseball instincts, overall athleticism, and his makeup.

Appel was expected to be a quick mover for the Astros, although given the state of the major league team there's not a ton of incentive to do so. However, I think I personally was anticipating him to get a little bit past Low-A before the end of the season. While it is still conceivable that Appel could make the Opening Day roster next year, starting at AA seems a lot more likely, and could help the team bypass any service time concerns they may (or may not) have. I think we see Appel at some point during the 2014 season, but probably not until at least after the All-Star break.

Once he reaches the Majors, he has the potential to be a top 20 starting pitcher for fantasy owners, profiling as a low ratio, high strikeout starting pitcher with the potential to throw a lot of innings. Whether he can reach that potential is still a bit unclear as of now, but it seems that he could pitch in the Majors right now with the skills he has. That said, he is better served by getting the opportunity to improve in the minors and close the gap between his potential and his current level.

For more about Appel and the Astros, head over to SBNation's Crawfish Boxes.