While there is no question that Stryker Trahan has an 80-grade name, what can we expect from his play on the field?

When it comes to prospects, certainties do not exist. Every prospect has a wide range of outcomes between his ceiling and floor potential, with most players settling somewhere in between the two. I like to think of prospect outcomes as the Dream (the player's ceiling), the Nightmare (the player's floor) and the Reality (weighing all the factors to come up with the most likely outcome). Throughout the year, I will be examining the ceilings and floors of players across the minor leagues, and making my best forecast on the eventual outcome. Today's prospect is Diamondbacks' catching prospect Stryker Trahan.

The first backstop selected in the 2012 Rule 4 draft, Stryker Trahan is a prime example of a prospect that gets downgraded by more conventional prospect rankers due to reasons that won't necessarily determine his fantasy value. What exactly does that mean? Trahan is a bat-first catcher with a bat that looks like it could be rather special, but his defensive outlook isn't quite as rosy. But before we get to the specifics, here is some footage thanks to J.D. Sussman of Bullpen Banter:

In a short clip, he certainly looks the part of a top catching prospect. At the plate, Trahan shows excellent bat speed, 70-grade raw power, and an advanced feel for hitting and the strike zone, traits that were on display in his pro debut last season, when he hit .281/.422/.473 with a league-leading 40 walks in the Rookie-level Arizona League. This year, Arizona chose not to rush him, sending him to the Pioneer League rather than handing him his first full-season assignment. His numbers there have not been quite as good, but he still has hit .259/.340/.472 while learning the nuances of the most demanding defensive position on the field. Along with the batting chops, Trahan is a plus runner, a rarity for catchers, and he could add 15 steals a year in his prime. Behind the dish, Trahan has the tools to make it as a catcher - 65 arm strength, a durable, athletic frame, and a desire to be a catcher, but he has a long, long ways to go to become a major league caliber receiver.

When talking about Trahan, the comparison that is often made is to Rays' rookie outfielder Wil Myers. Myers was drafted as a catcher, but transitioned to the outfield because his bat was much more advanced than his glove. As much as we try to stay away from comps, I think this one is helpful in highlighting his ceiling because the profile is very similar - both are athletic enough to possibly handle center, but better suited for right, both have strong arms, and both have tremendous raw power with a solid plan at the plate. The main difference is that Myers is displaying all the tools as a 22-year old in the AL East, and Trahan is still a 19-year old in short season ball, albeit one with a chance to stick at catcher. Trahan should have the bat to still be a quality fantasy player at another position, but if he can stay behind the plate we could have a Buster Posey-like talent on our hands.

In our recent 3TO piece on Jorge Alfaro, I pointed out that top-100 catchers seem to miss with more regularity than those at other positions. Luckily, there is very little opinion that Stryker Trahan will be a catcher in the big leagues for numerous reasons. Some question if he'll ever be good enough to do so, and others simply think that the bat is too valuable and far ahead to waste the time making him a catcher. Admittedly it's a non-zero chance that he sticks, but I haven't seen or heard any reports that say they think that he will stay. As always, a move of the position is going to put a lot more pressure on his bat. How much pressure? Well here you can see the average numbers by position this season courtesy of FanGraphs:

That's a stark jump in production across all big leaguers, and the difference is even larger when considering just those players that will be helpful in a fantasy league. As for the Myers comps, I'm a bit skeptical on Trahan ever reaching that level as a prospect or a player. That's no knock, considering Myers was BA's Minor League Player of the Year last season and he may very well be American League Rookie of the Year this year, but when Wil Myers was 19-years old he was hitting .315/.429.506 split between Lo and Hi-A. Frankly, I am really disappointed in Trahan's numbers this year, and maybe he won't handle more advanced pitching. Reports and pedigree lead me to believe he will in fact be a big leaguer down the road, but the floor is quite a drop from his lofty ceiling. 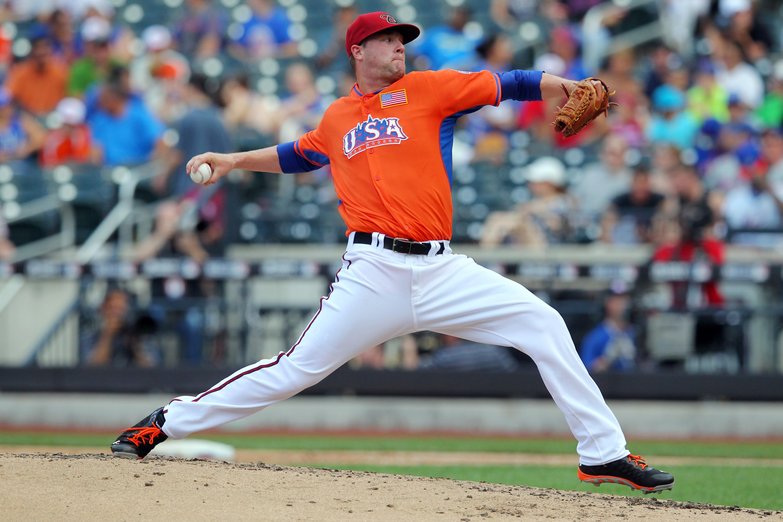 I feel I need to disclose a few minor things before taking a real stance on Trahan. First, I'm not sure I would like him as much if his name was say, Jeff Morris. Stryker Trahan, however, just sounds like the name of a superstar, and that may sway my judgment ever so slightly. Also, more rationally, I really like left-handed hitting catchers, and I always have. Now maybe that shouldn't really factor into my evaluation of Trahan because I don't think he will be a catcher, but for the time being it does. Moving on, I'd say I am in the camp that believes in the bat. Far too often you find prospect that have power without strike-zone judgement or pitch recognition skills. While those skills can be developed, it's a great sign that he already has those traits and he can work on refining rather than developing. That said, I think Trahan turns into an above average regular, not a star, but again he'll have the skills (power, OBP, speed) that will make him a quality fantasy producer at any position.

For more on Trahan and the rest of the Diamondbacks' prospects, be sure to visit AZ Snake Pit.