Jason Hunt takes a look at a pitching prospect who is already moving quickly despite only being drafted two months ago in Jonathan Gray of the Colorado Rockies.

I always find it interesting to see when draft prospects start getting legitimate helium, and there may be no pitching prospect in the minors right now getting more helium that the Rockies' Jonathan Gray. Gray started the season eligible for the draft for the 3rd time, and while he started the season ranked as the #36 college prospect available, ended up in the conversation for the top overall pick. How did he get here, and what can we hope to see in the future?

Gray was drafted out of high school in the 13th round back in 2010, but did not sign with the Royals at that time. After that season, he decided to attend Eastern Oklahoma State Junior College, rather than his original commitment to Oklahoma. Drafted again in 2011, this time in the 10th round by the Yankees, Gray did not sign again, and decided to attend the University of Oklahoma instead. That decision has looked very smart at this point, as Gray came into his next draft eligible season (this one) ranked as the #36 college prospect available, and looked to be a potential top 50 draft pick.

Fast forward through a stunningly good season at Oklahoma this year (147 strikeouts, 24 walks in 126 innings pitched with a 1.64 ERA), moving himself into the conversation for the top overall pick in the draft. Baseball America ranked him as their top draft prospect overall prior to the draft, which seemed to be the consensus among other draft rankers. However, a positive drug test for Adderall (reported less than a week before the draft) clouded his draft prospects, but didn't cause him to drop particularly in the end. He was selected third overall by the Colorado Rockies, and signed for a bonus of $4.8 million, which saved them over $800K on the slot recommendation.

The Rockies have been bringing him along slowly so far in terms of usage, keeping him on strict pitch counts and innings limits per start. The team started him out at their short season rookie league affiliate in Grand Junction, where he made 4 starts and posted a 4.05 ERA with 15 hits allowed, 15 strikeouts and 2 walks in 13 innings pitched. In a bit of a surprise, the organization promoted him straight to High-A Modesto in the hitter-friendly California League at the end of July. So far, he's made 3 starts there, allowing 5 hits, 5 walks, 1 run, and striking out 18 in 14 innings pitched. 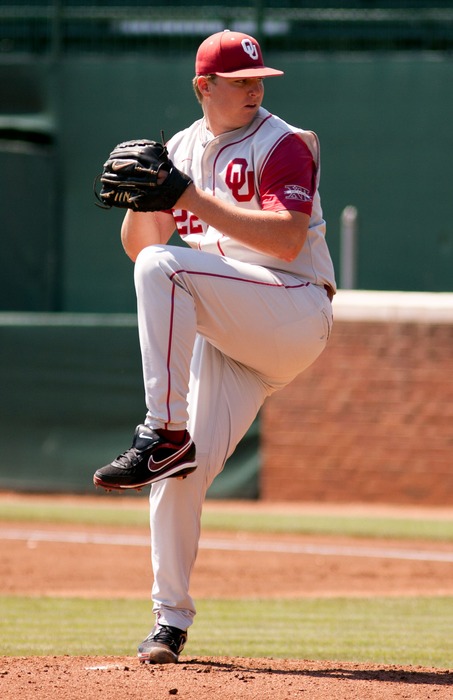 The first thing that jumps out about Gray is the fastball, which he can sit in the mid-90s and dial it up as high as 101 at times. From watching one of his starts in Grand Junction on video, the excellent plane that Gray gets for the pitch stood out. He commanded it reasonably well that day, although he did have a couple of pitches where he lost his release point. Nothing brutally concerning so far, but just things to work on. The pitch is already considered plus, with plus-plus velocity and the potential to be an 80 grade offering if his command develops to its' full potential.

Gray also features a slider which appeared to have almost downward break in the video, and is definitely a swing-and-miss offering. The movement of the pitch clearly stood out, and was pretty easily fooling the rookie ball hitters. The pitch appeared to me to be above-average, and reports on Gray have noted that the pitch could also be a plus offering.

His third pitch, a changeup, was used sparingly in the start, but was effective in messing with the hitters' timing. The pitch is considered raw at this point, and will really be the key to what his ceiling can be. It is anticipated that the pitch will turn into at least an average offering, and if so his ceiling could be top-of-the-rotation. If it doesn't, he could end up being a lights-out reliever with a devastating fastball-slider combination.

It's early so far, but Gray doesn't seem particularly phased by pitching in the California League, as he has allowed just 10 base runners and struck out 18 in 14 innings so far there. The command is a bit concerning right now, but something that is anticipated to improve over time. Gray is likely a top 10 (at worst) pitching prospect right now, and will likely slot into the top 25 on most prospect lists this offseason. The Rockies have not done well developing starting pitching in the past, but a pitcher like Gray could see legitimate success given his propensity to get ground balls and the repertoire to post high strikeout totals.

Just my feeling, but I believe that Gray will start the 2014 campaign at AA, and could spend the full season there as he builds up his workload and continues to work on his secondary offerings. It would not surprise me if the Rockies moved him up to AAA, but I could also see a jump straight to Colorado to avoid the PCL. I don't think we see Gray for more than a cup of coffee in 2014, if that, but more likely is given a shot to make the rotation in 2015. Time will tell if the helium he has been receiving is warranted, but I'm a believer, and can see him being a top fantasy starter even with pitching in Colorado.

For more about Gray and the Rockies, head over to SBNation's Purple Row.