In a Cubs' system stacked with bats, pitching prospect Pierce Johnson seems to be the forgotten man. That may not be the case much longer.

As Jason, Craig, and Kevin have noted in some of their work, as a prospect writer sometimes I have trouble deciding on a player to profile for a column. Sometimes I have someone in mind days, or even weeks in advance, but often choosing a player to write about can be more difficult than actually assessing his present and future skills. This week, I once again found myself without a topic, that is before I listened to Keith Law's interview with Cubs' Senior VP of Player Development and Scouting, Jason McLeod on the latest episode of Behind the Dish. In addition to talking about Javier Baez, Kris Bryant, and the rest of the Cubs' hitters, McLeod and Law talked about their top pitching prospect, Pierce Johnson. Being that he's still a bit under the radar, I think now is a perfect time to look at the right-handed starter.

Waiting In The Wings: Nick Castellanos 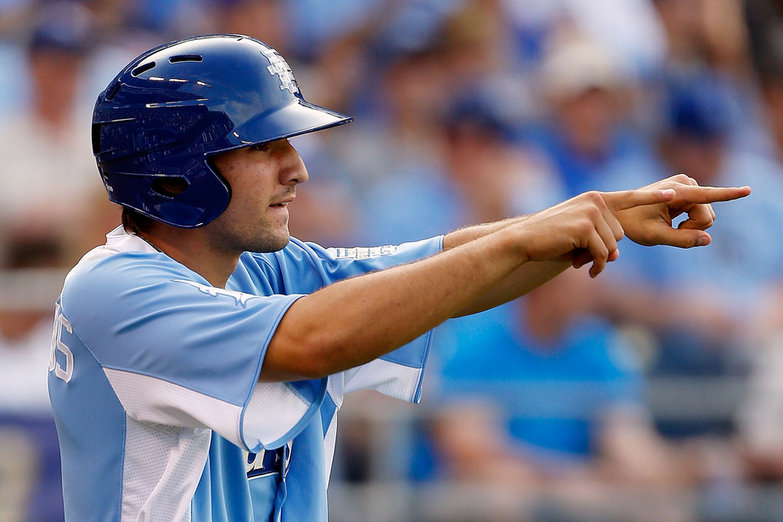 Due to a broken hand, Johnson missed nearly 2 months of the season during his senior year of high school, which in turn limited the ability for scouts to watch him throw and really hurting his draft stock. Despite the injury, Tampa Bay liked what they saw enough to select him in the 15th round, but Johnson (smartly) decided to pass to attend Missouri State, the same program that produced Shaun Marcum, Ross Detweiler, Brad Ziegler, and Ryan Howard in recent seasons. During Johnson's junior season at MSU, he could have helped Brian Kenney's #KillTheWin campaign, as he finished just 4-6 despite ranking among the conference leaders with a 2.53 ERA and 119 strikeouts in 99.2 innings.That performance, along with solid scouting reports, prompted the Cubs to select Johnson 43rd overall in last year's draft and sign him for $1.19 million. Due to innings restrictions, Johnson only threw 11 innings after signing, and although he pitched well, there's very little to learn about a college pitcher in a small sample against least experienced hitters.

His first real test has been this season, and Johnson has done a fine job, pitching well both at Kane County (Lo-A) and Daytona (Hi-A). Between the two levels, he has thrown 116.1 innings with a 2.86 ERA (2.87 FIP) and he is striking out 25.3% of the batters he has faced while walking just 8.9%. With just a few weeks left in the season, he will probably finish the season in Daytona and then start next year in Double-A with a shot to move quickly if he pitches well.

Actually getting a report on Pierce Johnson has been somewhat difficult for scouts due to a spotty record of health in his amateur days. First it was the broken hand he suffered in high school, followed by forearm strain and a dislocated kneecap in college. When he has been on the field, Johnson has displayed a solid overall skillset, starting with a a loose, lanky build, and finishing with a quality three-pitch repertoire. Here you can see Johnson's arsenal and delivery, courtesy of Shadows of Wrigley:

Though it's a short video, there is a lot that can be seen right there. I would put a 65 grade on the fastball -- 92-94 velocity, topping out at 96, with some life down and in to a right-handed hitter. He needs to control the pitch a bit better, but overall it looks like he should be able to pitch off of his fastball once he reaches the big leagues. The breaking ball is a curveball, although from his arm angle it really has a slurvy 11-5 action. The deuce is also quite firm, coming in in the low 80's. It should be a real weapon and potential swing and miss pitch against righties. He only throws one changeup in the clip. presumably because he has not had to use the pitch much in his career. Overall though, it's a solid mix and if the changeup develops a bit more he should be able to continue as a starter.

While I do like the stuff, and I love the frame, Johnson's arm action isn't something that I love. He has a bit of a "one-piece" arm, which refers to the sort of catapulting motion he uses to throw, rather than flex his elbowing and finishing with his forearm. This is a problem because it can strain the forearm, and because it also limits arm speed and gives hitters a longer look at the ball out of his hand. Also, he will need to repeat his delivery better and keep a more consistent arm slot as he moves up, because Johnson won't miss enough bats to warrant a league average or higher walk rate in the show.

College pitchers, especially first rounders, tend to move quickly through the minors, but Johnson's injury history has him a bit behind the developmental curve most would take. Although I said above that he may move quickly, the Cubs also may decide to leave him in the minors all year next year, and give him a shot at the rotation sometime in 2015. Johnson is another player a long ways from reaching his potential, but if he can just stay healthy I like his chances to become a mid-rotation starter that punches out 160-175 hitters a year, and a much needed piece to Chcago's big league club.

For more on Johnson and the rest of the Cubs' prospects, be sure to check out Bleed Cubbie Blue.