It's easy to look back on prospect lists and pick out reasons why a top player never made it in the majors. It's much tougher to look at a current great minor leaguer and have the balls to say "What if he doesn't?"

Why don't we hate the Cardinals? If you're not a Cardinals fan, there are plenty of reasons why we should hate or at least strongly resent St. Louis. All the key "Yankees-Red Sox" pieces should be there, and yet I've always looked back on Cardinals history with admiration rather than jealousy.

St. Louis has been home to some of the greatest players in sports history, from Rogers Hornsby to Dizzy Dean to Stan Musial, Johnny Mize, Bob Gibson, Ozzie Smith, and Albert Pujols. The 1927 Yankees might be the greatest team in baseball history, but the 1926 Yankees lost 4-3 against the Cardinals. That team starred Hornsby, but also featured great players of the day like Bob O'Farrell (the '26 MVP), Jim Bottomley (the '28 MVP), Les Bell, Billy Southworth, and Ray Blades.

They took that Series from the Yankees and 72 years later Mark McGwire took a record from Roger Maris. It doesn't feel like anybody looks at the Cardinals and thinks "That's the greatest franchise in the history of baseball" but without the money of the Yankees, without the market of New York, without the publicity of being at the epicenter of our universe, the Cardinals haven't only competed on a consistent basis for well over a hundred years but they consistently churn out a farm system of (fittingly) the best under-the-radar prospects.

Until the day they sink your battleship with a 13th round pick that becomes almost an insta-Hall-of-Famer.

Looking at the current Cardinals roster, you'll find a slew of former prospects and non-prospects that make up one of the best teams in baseball. Yadier Molina was never a player expected to become a star, and today he might be the best all-around player in the game. Allen Craig never made a Baseball America Top 100, but has made it easy for St. Louis fans to get over Albert Pujols. (And has an OPS 126 points higher than Pujols.) Matt Carpenter never made it onto that list either.

This team hasn't gotten a great help from it's top prospects but luckily has done well enough with non-prospects to get over it when their "best" young players fall short of expectations.

In fact the best "Cardinals prospects" on this team are Adam Wainwright, Shelby Miller, Trevor Rosenthal, and Carlos Martinez. This team hasn't gotten a great help from it's top prospects but luckily has done well enough with non-prospects to get over it when their "best" young players fall short of expectations.

That's good, because the last time that St. Louis had a top five prospect before Oscar Taveras this year it was Colby Rasmus. And though Rasmus is still only 26 and the Cardinals managed to get good value for him in a deal to the Blue Jays, he has not played like a player that was ranked fifth overall in 2008 and third overall in 2009. Few people were putting out guesses at the time that Rasmus would be this inconsistent through five seasons, though in fairness he has put up 11.3 fWAR in his career so far.

If Tavares, the third overall prospect by Baseball America going into this season, puts up 11.3 fWAR by this time in 2019, will that be satisfying?

Yes, maybe. But what are the odds that he does that or better?

It's easy to look at all the good in a prospect and be a kind fellow that only gives praise to the Golden Children of Baseball, but if you want easy go read Highlights. I would much rather put out an article that's intermediate Sudoku!

Here are a few things about Oscar Taveras:

- Left-handed hitter and thrower. Perhaps a right-footed kicker and runner?

- Signed by the Cardinals in 2008 out of the Dominican Republic.

- Is named after The Oscars, like as in the Academy Awards.

- No, that last one, it is probably not true.

And now the important bit.

Here are a few concerns about Oscar Taveras:

ARL We Having Fun Yet? Is Age-Relative-to-League enough to justify a rather poor start to the 2013 season?

An arrest warrant been put out for Taveras that year. The charge? Murder. Because Taveras was absolutely killing it. 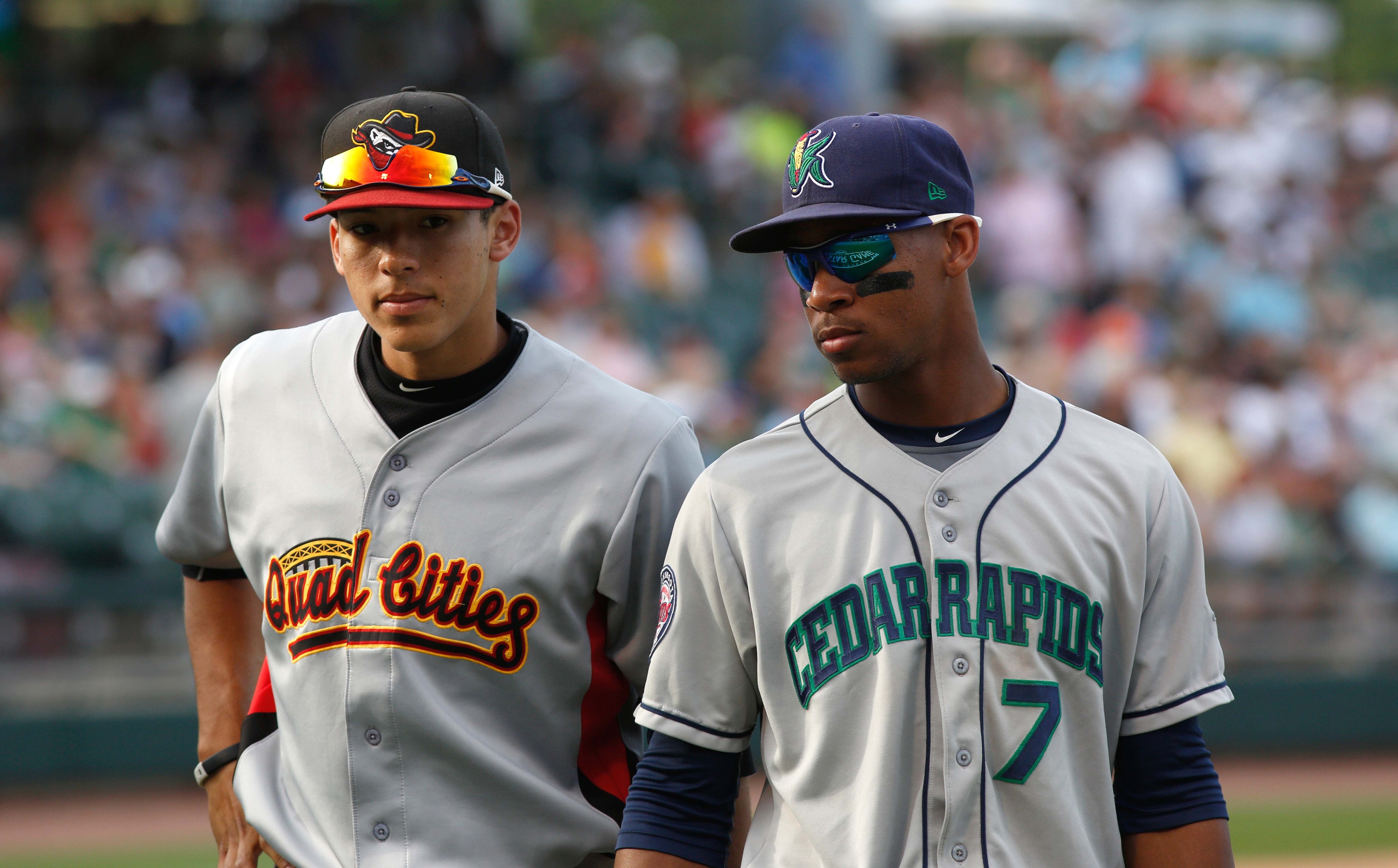 Andrew Ball's top 100 prospects at midseason. Are Carlos Correa and Byron Buxton in any danger of being the next Delmon Young?

He led the league in batting average, on-base percentage, and slugging percentage among qualified players. Players to crush it in the Midwest League as teenagers previously include Mike Trout, Nick Franklin, Wil Myers, Brett Lawrie, Mike Moustakas, Travis Snider, Justin Upton, Jay Bruce, Kyle Blanks, Cameron Maybin, Rasmus, and Carlos Gonzalez. You could keep going back and see that the Midwest is a great starting point for many of the great prospects.

Just because you can forgive mistakes and faults by players due to having a great age-relative-to-league, doesn't mean you can completely ignore them.

So that was really the start of Taveras being something, but were there levels of concern there? Just because a teenager does well in the Midwest, it hasn't always translated to becoming Mike Trout. Sometimes you become Travis Snider.

Taveras was fueled by a .440 BABIP (which is cleaner than A-Rod's fuel) and that can't be ignored. His .198 ISO is very good, not great. His 9.2% walk rate is the highest of his minor league career, and most evidence suggests that he's less likely to draw a walk than most top prospects. Remember what I said about Delmon Young and drawing walks?

Taveras had 77 plate appearances with the rookie league Javelinas in 2011 and didn't walk a single time.

Just because you can forgive mistakes and faults by players due to having a much better-than-average age-relative-to-league (Dash City) doesn't mean you can completely ignore them. Taveras saw his walk rate drop to 7.9% in 2012 and it's down to 4.8% in 2013.

"So what if he doesn't walk that much! He's got everything else, baby!"

Well, first of all, no he doesn't.

Second of all, the top players by Fangraphs WAR that have a walk rate under 7% are:

This point of "everything else, baby!" really does need to apply. Does he steal bases? He hasn't yet in his minor league career, only 25 of them so far. Does he hit home runs? His ISO is down to a career low .156 in the PCL this season. Can he play great defense? Most reports say that Taveras should be a good defender, but nobody expects him to be one of the best in the league like the guys listed above.

The most impressive thing about his game this season is that the guy rarely strikes out, but not striking out is perhaps one of the more overrated aspects of a players repertoire. It's great to make contact, but it's more important to know what kind of contact you are making.

A Down Year, Though Everyone Wants Him Up

Going back to his 2013 season in triple-A, Taveras has obviously underwhelmed. That's not surprising to see considering how high expectations were after last season.

Taveras raised his ISO from .198 the previous year to .252, while striking out in just 10.5% of plate appearances. He hit 23 home runs, stole 10 bases, and hit .321 on a reasonable .323 BABIP. A year after leading the Midwest League in batting average, and slugging, and OPS, as one of the youngest players in the league... Taveras did all that again in 2012.

The only other players in the Texas League of comparable age doing that well were Jonathan Singleton and Jurickson Profar.

Though it has only been 46 games, it could have been a better 46 games. Meanwhile, everyone is wondering when he'll "finally" make the majors. Maybe there's an old lesson to be learned here:

I hate to even make the comparison, but when Delmon Young had hit triple-A, he saw his power diminish further. He wasn't a basestealer. His defense was questionable. Young had dominated lower levels of the minors, but couldn't draw a walk and it only got worse as he graduated. There was even that cup of coffee in the majors when Young had one walk in 131 plate appearances.

Almost as good as zero of them in 77.

Young was also younger in triple-A than Taveras is now.

I realize that even proposing that Taveras could fail like Young did will probably end me up on some "Kill Lists" out there, but what if someone had taken more time to propose the same about Young once upon a time? Here's something else interesting:

What if I told you that there were two players in the PCL that are relatively the same age and have a higher OPS than Taveras? And one of them used to be a pretty good prospect.

Conclude already so I can tell you how dumb you are, Kenneth

I don't think that Taveras is going to wind up like Delmon Young. Are there attitude issues there like Young had? In regards to his defense, Taveras might be working as hard as anyone out there to get better -- a trait that Young and him will never share.

This season isn't enough to conclude much at all, but I don't think we can expect much more out of him in terms of being patient at the plate and taking a few walks unless his power increases and it's a bit concerning that it has gone the other way. The issue is that at the plate Taveras hasn't been a 30 home run guy, on the bases he hasn't been a 40-steal guy, and in the outfield he hasn't been an 80-tool guy.

Before I conclude that Taveras really is one of the top prospects in baseball, if not the top hitter overall, I need him to be at least one of those guys.

Given that he plays for an organization that, like Taveras, rarely misses, I am plenty hopeful that he's going to be alright. If history has anything to say about it, he'll be one of the best.

If the numbers this year have anything to say about it: "Take a walk, fella."