Highlighting the most interesting tidbits from Saturday's games, including notes on Josh Johnson, Matt Holiday, Matt Tuiasosopo, and more.

Share All sharing options for: Roto Roundup: Chris Archer, Juan Francisco, and Others

With Ray Guilfoly on vacation, I'm stepping in for this Sunday morning edition of Roto Roundup. With that out of the way, let's jump in to it!

In case you missed our Midseason Fantasy Position Rankings, here are links to each of our rankings published thus far.

Apparently there was enough Twitter support of the 3TO series that Ray created this nifty link to all ten of the profiles. You can check those out here, and thanks a lot for the generous feedback, it's definitely my favorite thing to write at Fake Teams.

Zack and I posted a new episode of the Fake Teams podcast yesterday, discussing the latest news in the Biogensis suspensions, the trades of Matt Garza and Francisco Rodriguez, and our consensus third base rankings. You can listen to the podcast in two ways, and don't forget to rate and review the pod, we really appreciate it.

Francisco flexed his muscles a bit last night, hitting a third inning homerun against the Rockies. That's Francisco's 8th long ball in 42 games with the Brewers.I said it on the last edition of the podcast, and I'll say it here - I like Francisco as a top-15 third baseman the rest of the season. No he won't help your batting average, but just think of him as Pedro Alvarez-lite and enjoy the power production.

Matt Holiday returns for the Redbirds

Cardinals' outfielder Matt Holiday went 1 for 4 with his 16th double of the season in his return to action last night. He had been sidelined since July 12 with a strained right hamstring. With a .268/.350/.449 slashline thus far, some might consider Holliday a disappointment this season. Now that he's fully healthy though, I fully expect him to be a top-20 outfielder from here on out, which is just how was ranked in our consensus rankings. 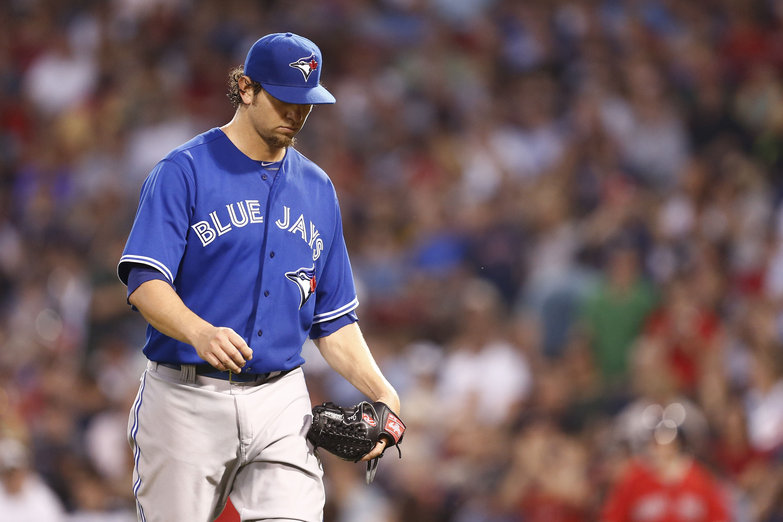 Johnson had yet another rough start last night, giving up 7 runs in 5.2 innings against the Astros. Johnson struck out 8 batters, but he also allowed 3 home runs. Over his last 7 starts, Johnson has a 7.97 ERA and the Blue Jays haven't won a game he has started since June 23. Despite that, he has a 2.88 K/BB ratio and a 3.60 xFIP on the season, so what should owners do for Johnson? For now, I don't think you can use him even as a matchups option. If you have room on your roster feel free to stash him, but I'd also have no problem letting Johnson go at this point.

For the second time in his last three outings, Archer fired a complete game shutout. The rookie right-hander allowed just 2 hits and didn't walk a batter in the 1-0 win against the Yankees, lowering his ERA to 2.39 in the process. Archer didn't make the top-50 in our consensus rankings, though I have a feeling he might have made the list if we re-did the rankings today. Still, I personally would have left him off my list because he has carried over the same poor control without the strikeouts. I'd focus on his .216 BABIP and 81.2% strand rate and be wary of Archer going forward.

Matt Tuiasosopo is quietly putting together a really nice season for Detroit. Getting the start in leftfield last evening, Tuiasosopo blasted his 7th homerun of the season, a 3-run shot in the first-inning of lefty Raul Valdes. Entering the season, the 21-year old had played just 71 career games in the big leagues, but he's been a big part of the Tigers' success, posting a .418 wOBA and 167 RC+ in part-time duty. His value is limited to AL-only leagues, but I expect him to keep hitting as long as the Tigers keep putting him in favorable matchups making him the rare fantasy player who actually would be hurt by an increase in playing time.

Bryce Harper homered again, his 15th of the 2013 campaign. Ray mentioned him in the Roundup a few days ago, but today Ithis is my column and I want to mention him again. Honestly if we brought up Harper in every Fake Teams' article it might not be enough. He's just that good.

Andrew Cashner took Josh Collmenter deep for his first career homerun. No real fantasy impact, except for those of you that want pitcher's hitting stats to count in fantasy. If you fall into that category, I just say, "Sorry bro, but no they shouldn't."

That's it for today! Thanks for reading and don't fret, Ray will be back soon enough.