Salazar pitched great Thursday night, but is he worth buying for the remainder of 2013?

Share All sharing options for: A Cautionary Tale: Danny Salazar

You know that feeling you get when you hear a no-name band for the first time and think you have gotten in on the ground floor of something special? In a few years when they blow up, you'll say you knew them before everyone else (I felt that way about the Dirty Guv'nah's - seeing them in Chicago in August). I felt that way watching the second inning of Danny Salazar last night against Toronto as he struck out the heart of the Blue Jays offense. He was available in every league except my 30-team, 70-man roster dynasty league, I was ecstatic. But as I began opening auctions for him in the leagues requiring me to do so, I watched his third inning and became immediately turned off. Here is my case for staying away from Danny Salazar despite his phenomenal performance Thursday night:

He got away with a ton of fastballs up in the zone. Check out the heat map below provided by www.brooksbaseball.net: 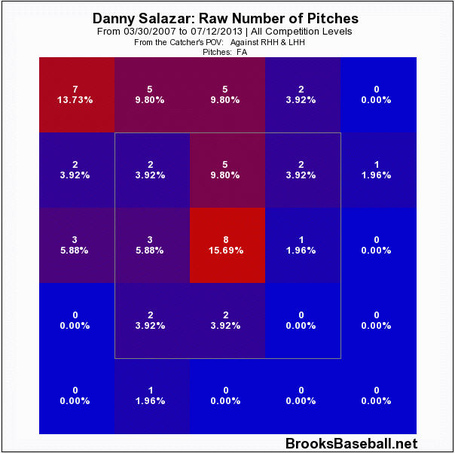 I don't really care if he's pumping a 96 mph fastball in there, if it's left up in the zone like that long enough he's going to get hit hard. To summarize the above chart in a sentence: Danny Salazar threw 90% of his fastballs (of which represent 70% of all of pitches thrown) in the top two-thirds of the strikezone and above. So much for keeping the ball low. Leaving the ball up and throwing that hard is a recipe for a disaster, which makes sense given the fact that....

2. He has a bit of an injury history

Salazar has spent 6 full seasons in the minor leagues and has topped 100 IP only once. Compare this to Corey Kluber (my true first love) who spent 5 full seasons in the minors and never pitched less than 125 innings. Salazar had Tommy John Surgery in early 2011 and always seems to be be dinged up. The numbers have been great, but he was on a pitch count against Toronto and will likely suffer the same fate in the majority of his remaining starts. Unless....

There was talk in a few articles that this appearance was just a showcase for a trade. If that's the case, then I want no piece of Salazar in 2013. He's not the established veteran that contending teams trade for, and he's more likely a piece going to a seller and the return will help fuel Cleveland's playoff push. I'm not much for speculation, but with a small sample size to go off of, everything must be considered when valuing this guy. It must also be mentioned that other articles say Salazar fits into the Indians 2014 plan and he was promoted merely because they were in a pinch. If that's the case, then...

4. There's no room in the Cleveland rotation

The top 4 spots are set with Masterson, Jimenez, Kluber, and Kazmir. McAllister has done nothing to lose his spot when he returns from injury after the All-Star break so I don't know where Salazar fits in for 2013. Cleveland is definitely keeping the training wheels on so even if an injury crops up in the rotation during the second half, Salazar isn't going to provide enough innings to make him worth an add in most leagues. He's going to throw 5 maybe 6 innings per start as he did despite being lights out against Cleveland. I could definitely see a scenario where he comes back up in the second half to bolster the bullpen because....

5. He profiles as a bullpen arm

He has an excellent fastball/slider (looks like a curve) combo and nothing else to supplement it. His changeup is average at best, lacking the late fade required of a true plus change. As mentioned above, he threw ~70% fastballs in his first start and I'm not sure that this is a sustainable pitch allocation. If he gets moved to the bullpen, he has the capability of dominating in short bursts while never making it back to the rotation.

Salazar is an excellent talent and is going to do some damage in the big leagues. I'm just not sure it's worth a roster spot on your fantasy team.