You already know about the top prospects getting promoted, but who are the other guys getting the call and can they help your fantasy team?

Despite all my hopes and dreams, not every Minor League promotion can be Taijuan Walker or Oscar Taveras. No the hard cold reality is that there are many more B or C level prospects promoted each year than those that make top prospect lists. But while they may not arrive in the show with trumpets and a red carpet like those more well-regarded youngsters, these other guys can still have value to fantasy owners. With that in mind, let's take a look at some of the players that have gotten the call recently.

We start with a pitcher who is, well, downright enormous. Standing 6'9", Hellweg casts quite a shadow from the mound. But even with his plus-plus height, Hellweg has really struggled in his first 3 games for Milwaukee, giving up 15 hits and 9 earned runs in just 6.1 innings. Numbers that bad may be a bit shocking considering he registered a 2.93 ERA in 14 starts in the PCL. Then again, maybe they're not that shocking once you notice that he has also walked 44 hitters in 76.2 innings in Triple-A, a problem that has plagued him throughout his career. That makes sense too when you think about how difficult it is to repeat a delivery when you're as big as Hellweg is. Randy Johnson, a similarly sized pitcher, albeit one with much better stuff, didn't really display much control until he was 26-years old and had over 200 MLB innings under his belt. Hellweg may be better suited as a reliever, running his fastball up into the triple digits in short bursts, or maybe he will figure out a way to cut the walks and become a successful starter. Either way, you should keep him far away from your roster until he shows signs of better control. 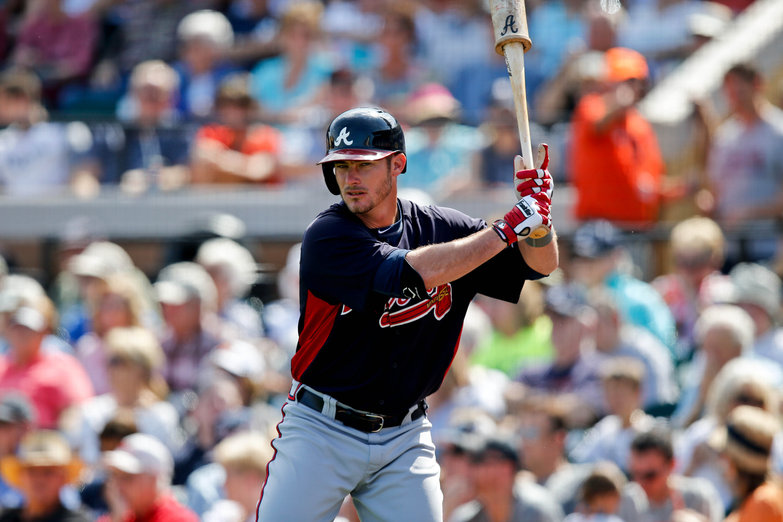 Traditional prospect lists, you know the ones that use defense, have never been particulary fond of Mr. Terdoslavich. Neither Baseball America or Baseball Prospectus thought enough of him to rank him within the Braves' top-10 prospects either of the past two years, largely in part to questions regarding his defensive position. The way he handles the bat, however, is more than adequate. Prior to his callup, Terdoslavich was hitting .318 with 24 doubles and 18 home runs in 85 games with Triple-A Gwinett and truthfully, he has hit at every level of the Minor Leagues. The biggest obstacle now is just the organizational depth of the Braves. The team is stacked at first base (Freddie Freeman) and in the corner outfield (Justin Upton, Jason Heyward, and even Evan Gattis), leaving no real spot for him. So far we have seen that problem manifest itself as Terdoslavich has been used solely as pinch hitter to this point. For this season I think he isn't worth adding in anything but the deepest of NL-only leagues, but he's a name to keep your eye on for the future, especially in a new organization. 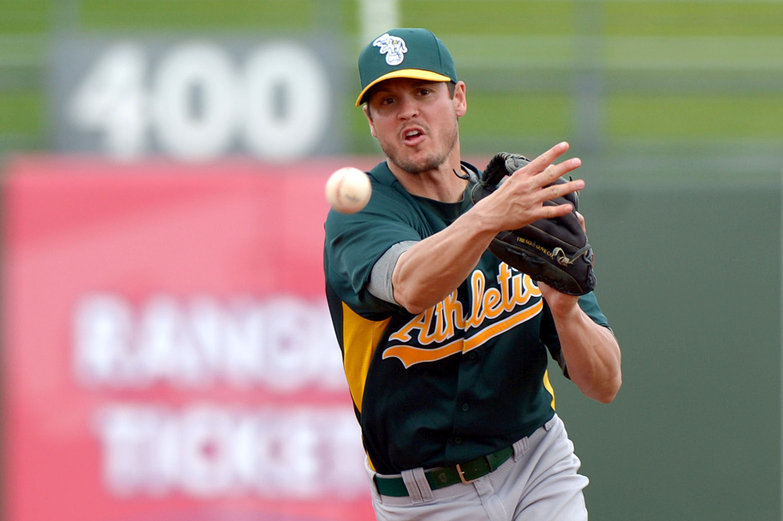 Now there's a name you might recognize. Unlike Terdoslavich, Green has not only ranked inside the A's top-10 in each of the last 4 seasons, but he also cracked BA's top-100 list in both 2009 and 2010. Initially a shortstop, the A's moved Green to centerfield for a period of time before shifting him back into the infield because they've been using players like Jemile Weeks and Adam Rosales at second base over the past few seasons. Much to my surprise though, A's second baseman actually rank 11th in the Major Leagues in wRC+ at 99, just a smidge below league average production. Still, Green has always hit, sporting a .304/.352/.468 Minor League line, and I expect him to be an upgrade over what they currently have. For those of you skeptical on the playing time, Green was thrown right into the starting lineup on Monday night, going 0-3 with two strikeouts in his debut. I doubt that Oakland promoted the 25-year-old to sit on the bench, so I think he should at least platoon at the position making him an option in AL-only leagues to start, with mixed leagues a possibility once we see just how much time he'll see. 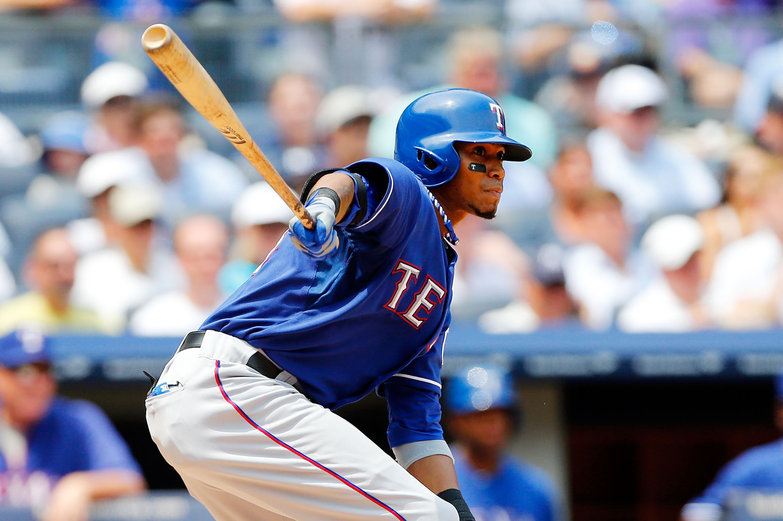 If you're a prospect nerd like me, you can remember many moons ago when Engel Beltre was the next big thing. Maybe that's going a bit far as he was never really ranked on many top-prospect lists, but look at this excerpt from his 2006 Baseball America write-up:

Said one international scouting director of Beltre, who signed for $600,000: "Beltre to me is a young Barry Bonds-all five tools. He can do it all. He's going to be terrifying when fills into that body."

Given time and at-bats, Beltre could blossom into a true five-tool superstar.

Beltre's five-tool package has garnered comparisons to big leaguers from Barry Bonds to Kenny Lofton to Andruw Jones. Beltre remains raw but his development is well ahead of schedule and his upside is enormous. Down the road, he could be a five-tool superstar center fielder.

Sadly as the years went on, and Beltre got older it became apparent he wouldn't turn into a superstar. Now his scouting reports glow about his defense in centerfield, but while he won't be Barry Bonds, Beltre did have 47 XBH and 36 steals in Double-A last year, and he was hitting .300 with 13 steals in Triple-A this year. Now, what's crazy to me is this year is only his age-23 season, meaning he is certainly still young enough to become a big league regular. However, for this year Beltre does not have an everyday job and therefore is not worth adding in any formats for the time being. 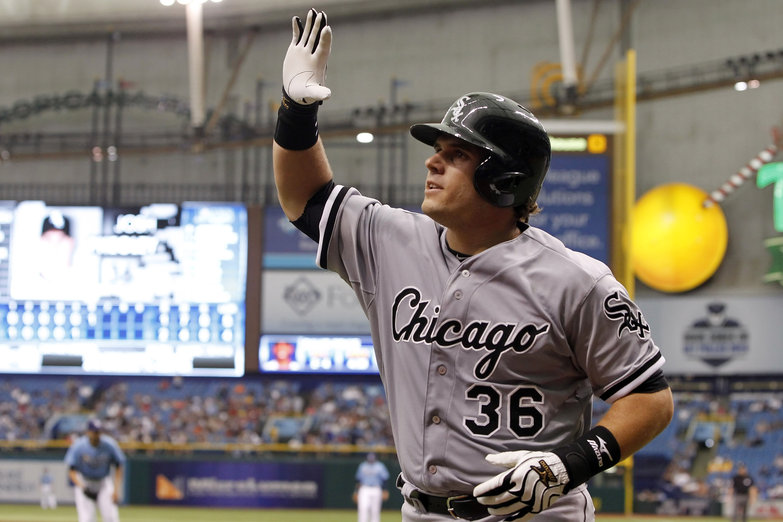 When the White Sox drafted Phegley in the supplemental first round of the 2009 draft, they thought they were picking a strong offensive player with a shot to stick behind the plate. But prior to this season, the 25-year old had hit just .253/.302/.383 in 4 seasons and he had never reached double digits in home runs, prompting most to call him a backup at best. And even that tag was due in large to his strong throwing arm that earned him a Rawlings Gold Glove award last season. Turn the page to 2013, and Phegley has become the offensive catcher he was supposed to, torching International League pitching to the tune of .316/.368/.597 with 15 home runs before his promotion, adding 2 home runs in hist first 10 MLB at bats for good measure. He doesn't walk much, but he doesn't strike out at all either, a very A.J. Pierzynski-like approach that should seem familiar to fans on the south side of Chicago. For the time being it appears he will split time with Tyler Flowers, but I expect Phegley to take this job at some point. Once he does, I'd slot him in around the back part of the top-20 for catchers making him valuable in two catcher leagues and in AL-only formats. So if you're hurting for catching in one of those formats, you may want to grab Phegley now.

More on Phegley's promotion from: South Side Sox

You can read more about all kinds of prospects over at Minor League Ball.