What Ever Happened to C.J. Wilson?

A look at why C.J. Wilson seems to have been forgotten.

Share All sharing options for: What Ever Happened to C.J. Wilson?

After signing a 5-Year/$77.5 million contract with the Angels last offseason, C.J. Wilson’s 2012 campaign was a bit of a disappointment. He started out hot but faltered toward the end of the season and finished the year with a 3.83 ERA, a 1.34 WHIP and 173 Ks in 202.1 innings. He struggled with his control and was uncharacteristically homer-prone. Fantasy analysts expected a lot from Wilson last year since he was moving away from the Ballpark at Arlington and into a much more pitcher-friendly home stadium. While Wilson was a tad unimpressive last year and you probably overpaid for his production, he was probably a little more accurately valued coming into 2013. So what happened to Wilson and why don’t we hear about him anymore?

Let’s start by looking at Wilson’s strikeout and walk rates – two metrics that have been at the center of the C.J. Wilson evaluation and projection enigma. Since becoming a starter in 2010, Wilson has struck 21.0% of the batters he’s faced and has walked 9.8% of them. Of the 43 starting pitchers who have thrown 600 innings over that time period, only four – Ubaldo Jimenez, Ricky Romero and Gio Gonzalez – have a higher walk rate. That means pitchers such as Edwin Jackson, Ervin Santana and Tim Lincecum have had better walk rates than Wilson over the past three years. Wilson’s strikeout rate compares a little better to the group but still only ranks a mediocre 23rd. It’s actually quite impressive that he has been able to strike batters out at his current rate, given his below league-average SwSt% of 7.7% and the fact that he has thrown first pitch strikes in only 57.5% of at bats.

Over the last few years, C.J. Wilson’s redeeming quality has been his ability to induce ground balls and limit hard contact. He has an extreme 49.2% ground ball rate and a better-than-average 19.1% line drive rate since becoming a starter. Those numbers mattered a little bit more when Wilson was pitching in Texas but, no matter what ball park he calls home, it will be tough for opposing batters to hit ground ball home runs. Having said that, Wilson’s HR/FB ratio has increased each season since 2010 and now sits at 11.3% for 2013. He’s already given up 8 dingers, 5 of which came at home, as opposed to having given up only 10 in 2010. According to his FanGraphs heat maps, Wilson is leaving more pitches up in the zone and, while his fastball velocity has actually ticked up in the last two years, he’s had a trouble with leaving change ups up and hanging curveballs to right-handed batters.

Honestly, I’m torn as to how to feel about C.J. Wilson. I started writing this post with the intention of making a case as to why Wilson is a valuable fantasy pitcher. Upon doing some analysis, I still haven’t come to a conclusion. On one hand, there are all of the notes I listed above. On the other hand, Wilson has been one of the best pitchers in the league since his conversion. The following graph shows Wilson’s performance relative to the previously stated sample (43 starting pitchers who’ve thrown at least 600 innings since 2010). 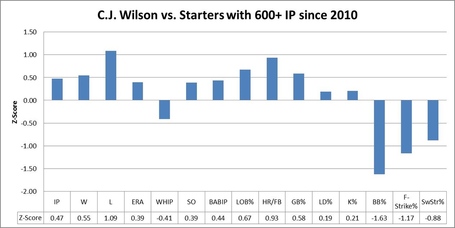 As you can see, Wilson has been above the group average in almost every category listed above. The troubling part of it all is that Wilson is struggling in some areas that have been his strengths such as HR/FP, BABIP and LOB%. When Wilson is at his best (a la 2011), he is an above average strikeout pitcher who is able to limit home runs by inducing ground balls. His control was the best of his career in 2011 and he was able to work ahead of hitters. He seems to be regaining some of his 2011 form as he’s increased his F-Strike%, SwStr% and K% while reducing his BB%. The graph below shows Wilson’s trends in these stats since 2010. 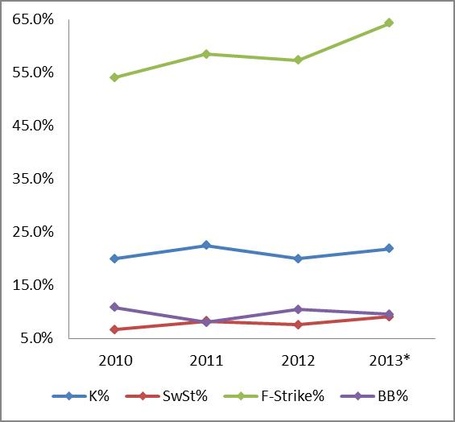 For the first time as a starter, Wilson is underperforming his metrics. His BABIP is currently twenty points above his career mark and his xFIP is 3.86. If Wilson can find a way to command his offspeed and breaking pitches a little better and control the strike zone, I think he can get back closer to what we were starting to get used to seeing from him in 2010 and 2011. If nothing else, Wilson is durable and should be a lock for another 200 IP with ~170 Ks and a mid-to-high 3.00 ERA. His WHIP will never match Cliff Lee and the wins we thought would come from pitching for the Angels are too unpredictable to rely on so take Wilson for what he is. But don’t forget about him.