Francisco Liriano has certainly fooled some of us before. Is he up to his old tricks, or is this dominance for real?

Share All sharing options for: The Best Pitcher in Baseball: Francisco Liriano?

I wish I was different, I really do, but much like the rest of the Fake Teams staff, there are just a few certain players that I can't get enough of, no matter how badly they hurt me. Too many times I've sworn that "this is the year that Rich Harden stays healthy" or "Ian Stewart is finally going to break out, you'll see." Sadly though, these players have repeatedly crushed my hopes, and often my season along with them.

Eventually, though, I have learned from my mistakes and moved on from each player. Every player except for one pitcher that I just come back to year after year. That player is Francisco Liriano.

Right about now, I can imagine a few of you nodding your head because you understand what I've gone through. That stuff, those strikeouts, that potential, there is just so much to love about Liriano. During the 2006 and the 2010 seasons, Liriano was among the very best pitchers (and fantasy pitchers) in the game. What I tend to ignore is that the rest of his career has been rather mediocre. Check out the difference:

As you can see, despite his tremendous performance in that season and a half, Liriano has basically been a worthless fantasy pitcher for the majority of his career. Undeterred by such a rational thought and against the urging of friends and family, I proceeded to select him in every one of my leagues this year. This should have been a disaster, but so far it has been quite the contrary as he has pitched really well, registering a 2.17 ERA and 39 strikeouts through 5 starts this season. So is he simply toying with us once again, or is this for real? Let's examine the facts.

Has he been lucky? 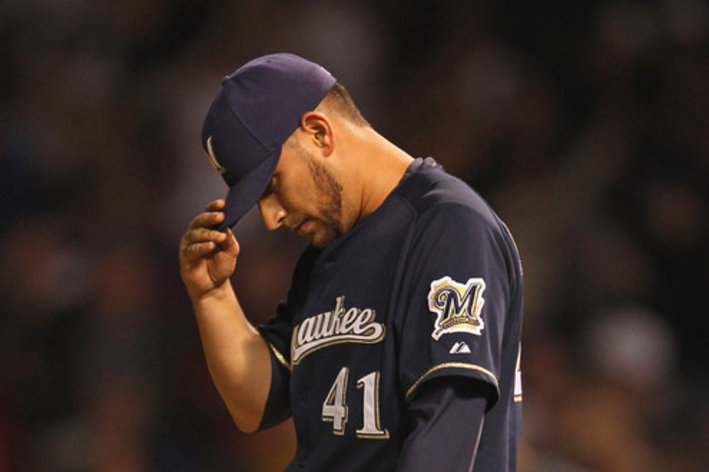 Dealing with your own addictions? Zack Smith offers his own tale of the players he can's seem to get enough of.

Many times the best place to look when a pitcher is on a hot streak is at two of the main indicators of luck, BABIP (batting average on balls in play) and strand rate. His strand rate, which should typically hover around 70%, is currently a bit high at 80% which points to some good fortune, but the BABIP is a completely different story. He actually seems to be getting rather unlucky with balls in play, sporting a .342 BABIP that should certainly come down a bit. Scary as it seems, with the amount of infield flies and ground balls that he is generating, Liriano's ERA actually could be a tad better, a notion that is fully supported by his 1.31 FIP.

How has he been so effective?

Unsurprisingly, his dominance almost entirely comes down to the walks and strike outs. His strikeout rate currently stands at 31%, which would represent a career best, and his walk rate of 7.3% is the lowest it has been since his superb 2010 season. In fact, his performance so far looks a lot like his 2010 season, as his ground ball rate is back over 50% for the first time since that season and his swinging strike percentage (16.2%) is also the best it's been since then. And he has the stuff to back up the results, with his arsenal as strong as ever. For the unfamiliar, Liriano throws a fastball, a sinker, and slider, and a changeup, with the latter three pitches being used the most frequently. While the sinker and fastball have done a great job generating ground balls this year, the two offspeed pitches have been absolutely unhittable. Batters are swinging through the changeup more than 26% of the time it's thrown and the opposition is managing a meager .137 wOBA against his slider, per FanGraphs. Add in the fact that 2013 marks his first season pitching in the National League, and it's rather unsurprising that he is succeeding, and no good reason to think the success cannot be continued.

Ok, what should we do?

Go get him. Add him if he's still available (64% owned in Yahoo, 86% in CBS and 92.6% in ESPN) in your league, and trade for him if he's not. I have already admitted to not being unbiased about Liriano, but I don't think my cloudy judgment should be ignored in this case. He has always had the talent to be among the elite pitchers in baseball and it is coming together in front of our very eyes. Call me crazy, but I say Liriano finishes the season with a sub-3.00 ERA and 190 strikeouts despite his time missed early in the season, making him a top-20 starter.

For more on Liriano and the rest of the Pirates, please check out Bucs Dugout.