My FakeTeams teams falls on hard times and falls into last place: Time for faketeam to get real!

From in-the-running to completely paralyzed, is there any hope left for my last place team?

Share All sharing options for: My FakeTeams teams falls on hard times and falls into last place: Time for faketeam to get real!

Several times this season I've reported on the only fantasy baseball team I still maintain; a keeper team that I've spent over a decade trying to build into a winner. Instead, I've been to the playoffs only once and I didn't win. I'm 0-1 in the playoffs in a league that I've spent thousands and thousands of hours on.

This year I did think things were going to be different.

- I had perhaps by best set of keepers ever with Felix Hernandez, Prince Fielder, David Wright, Giancarlo Stanton, Jason Heyward, and Yu Darvish.

- I had cut down to only the one league, so I could concentrate.

- I used the FakeTeams Top 200 as my main guide in the draft, which helped me choose players that I never would've taken otherwise. This includes A.J. Burnett, a real star for me this year.

- I showed patience and went from being the guy that had moves like Jagger to a guy that you'd think hadn't been paying all that much attention. (oops) But really I let myself have an off-hands approach to let the players speak for themselves.

Maybe that was a mistake. Because this morning I went to check on the progress of my team and wouldn't you know it, in my 12-team league I've landed here:

I am now 30 games under .500 with more than 33% of the season finished. Its going to take a Helen Keller-sized miracle to turn this thing around or it's another season without a playoff payoff. Here is my starting lineup: 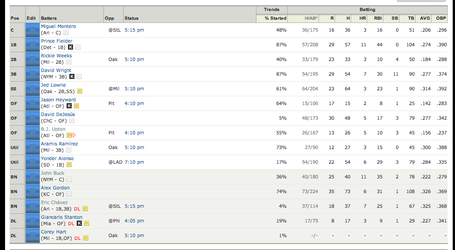 The biggest change so far is that I traded Danny Espinosa and a pitcher (I don't remember which, he wasn't significant) for Eric Chavez and Tommy Milone. It was a lateral move if anything, but I was close to dropping Espinosa, who is still finding new lows to reach.

- Stanton has now spent more time on the DL this year than not on the DL.

- You all gonna make me lose my mind, B.J. Upton, cause you suck.

And here is my pitching: 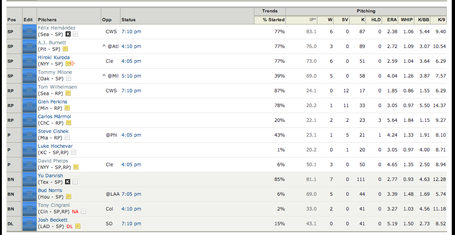 I decided to add Tony Cingrani in the hopes that he'd be back up soon enough. A player doing what he did should not be available in my league, so it's worth it to wait it out a little longer. Other than maybe Bud Norris, I am fairly happy with my pitching. Everyone could always use another starter, but as of now I can't complain.

Here are the top available hitters by Y! Rankings: 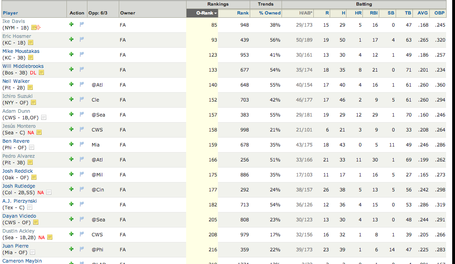 Here they are by this seasons production: 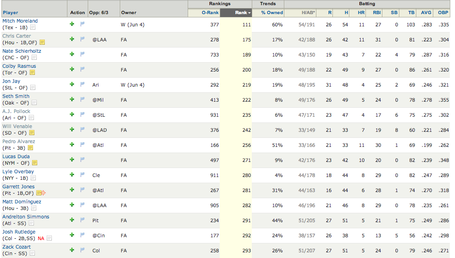 As you can see, some are hotter than others. Small sample size be damned, I like to know "Who is hot" and "Who is totally not" and this is the last 30 days. As you can see, Mitch Moreland is totally hot. Sucks that he has to play first base.

See any pitchers worth adding?

The Y! Rankings are a whole crapload of "remember when" and "what could've been": 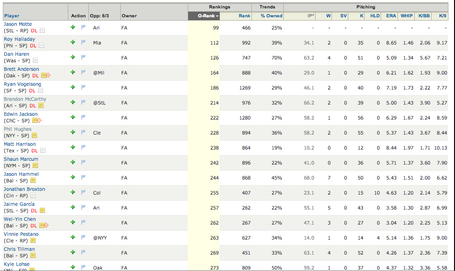 Over the last 30 days, is Tommy Hunter really worth adding? 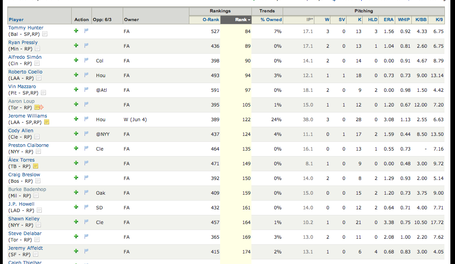 The truth is that I'm not sure what options I have left. I can't see myself getting rid of Upton, Weeks, and Montero, nor do I think that there are better options so readily available. This is the team that I brought to the dance, they've had some bad luck, but I still think there's a chance that I could take this date home tonight.