A Few Thoughts on Position Scarcity

Brian Creagh explains his change in perspective on position scarcity

Share All sharing options for: A Few Thoughts on Position Scarcity

Remember the dark days in January and February, when fantasy baseballers passed the time debating whether it was worth reaching for Troy Tulowitzki with a first round pick or if it was better to lay in the weeds and pop Josh Rutledge or Andrelton Simmons at the end of the draft? Dark days indeed. Although Yasiel Puig, Byron Buxton, and Gerrit Cole have lifted the darkness, I want to take a look back at our old debate, because I've recently had a change of heart.

The debate revolves around position scarcity and whether we value a player's stats more or less based on the position he plays. My initial belief was position scarcity is a non-issue. I held this belief because I felt there was too much variance throughout the season, with injuries and poor performance, to reach for a player whose projected stats didn't justify that selection. Players like Buster Posey, Troy Tulowitzki, and Dustin Pedroia are nowhere to be found in any of my re-draft leagues. In the middle of writing another piece, I was looking at some of the leaders by each position, and as I dug deeper into the numbers I started to reconsider my position on position scarcity.

I still believe firmly that there is a ton of variance and turnover in a single fantasy season, but where my initial analysis fell short is in the opportunity cost of losing that early pick due to injury or poor performance (one of my greatest fears when reaching for positionally scarce players). "Weak" positions are usually comprised of a few top options, maybe an elite option from year to year, and a bunch of middling options to round out the position (C, 2B, SS in 2013). "Strong" positions have a greater variety of performances with a distribution more spread out above and below the mean. The distribution of players around the mean is an important factor when deciding whether or not to reach for an elite player at a given position. Here's a visualization to show what I mean (click to zoom to get the full effect): 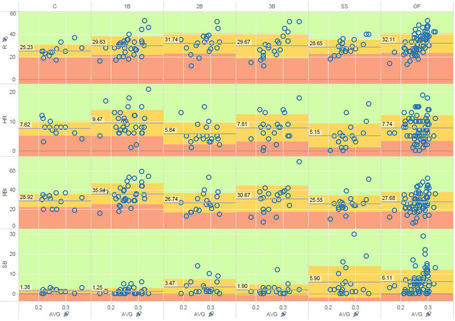 What you're looking at is 2013 results for standard 5x5 stats for players at each position. The background colors represent the players' distributions around the mean. The yellow area is one standard deviation within the mean, the red is a standard deviation below the mean, and green is a standard deviation above the mean. There's a lot going on here, but focus your attention on the positions with the smallest amount of yellow area. These windows represent the positions where the population of players' performances is very similar, or in other words the likelihood that a free agent pickup of that position is of equal caliber to starters of the same position. I know the translation is a bit loose, but I think the logic holds some weight.

On the other hand, windows where the standard deviation is greater (larger yellow area) represent positions where there is a greater difference between the performances of players. Positions like 1B and OF in the graph above, qualify as "Strong" positions where you can afford to wait on the elite players because the second and third tier guys are still significantly above average.

The evidence presented is by no means definitive, but it at least allows me to make sense of the idea of position scarcity. I can reach for next year's Troy Tulowitzki (probably Troy Tulowitzki) without fear of his injury, because there will be plenty of league-average options available who can still stack up with the rest of the league. I will wait on OFs, because the elite options aren't much better than the second and third tier players. This discussion is probably best suited for the off-season, but I came across the idea this morning and wanted to memorialize my thoughts. I've also added another version of the visualization with some players names worked in: 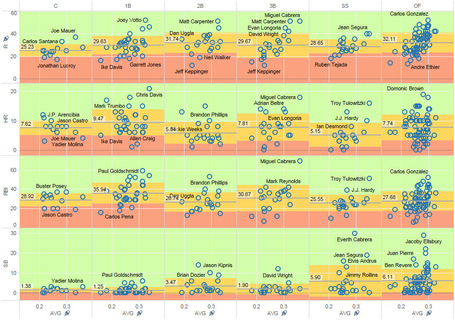