Jason Hunt has been participating in an NL-only Experts League on CBS, with some mixed results. How has his team done since the draft?

Normally on Mondays I write about one of the prospects that could be coming soon to the Major Leagues, but with Gerrit Cole and Zack Wheeler both arriving this week AND having been written about relatively recently (Wheeler here, Cole here), I thought now would be a good time to check in with an update on my NL-only CBS Experts League Team, and see if my logic back in early March held true at all. You can find the original post detailing my thoughts here.

Carlos Beltran (OF - STL) - Beltran has been my best hitter to this point, on pace for 35 HR/100 RBI with a .300 batting average. To say that he's been help carry my team to this point is probably an understatement.

Marlon Byrd (OF - NYM) - For a reserve round pick, getting 8 home runs and a batting average that doesn't destroy (.255) has been a pleasant surprise.

Heath Bell (RP - ARI) - Ah, injuries and blind luck. I picked up Bell a few days before he was moved into the closer's role because the rest of my pitching staff had been so decimated that I was desperate for strikeouts.

Talk About A Disaster Area

Giancarlo Stanton (OF - MIA) - The goal with Stanton had been to get a bonafide power hitter to help carry the rest of the offense. Except that he didn't hit a home run until the 27th of April. And proceeded to go on the disabled list on the 29th of April, and hopefully will be back this week. As the most expensive player from my draft, this really could not have gone worse so far.

The Related Compounding Errors Related to Pitching Injuries: Pitching in an NL-only league can be dicey at best to begin with. Then add injuries to Chad Billingsley and Jonny Venters and watch the problems compound: Aaron Harang, Jeff Francis, Tyson Ross, Chris Young. At least Chad Gaudin has pitched well.

So What Have We Learned?

1. If you're going to spend big on any one player, they had better do what you think they will.

Losing Stanton for the last month and change, and having Strasburg miss time definitely haven't helped this team's performance. Not getting that production (and not having that money spent elsewhere on players) has hurt, especially on the pitching side.

2. Don't screw up your reserve rounds.

Let's see... if you know at your draft that your CI is brutally weak, maybe you should try to take someone who could come up this year. Nolan Arenado wasn't available by my first pick, but Anthony Rendon was. Who did I take? Kyle McPherson. Sigh... You probably aren't going to lose your league in the reserve rounds, but you could definitely win it. I mean, look at some of the players taken in reserve rounds who have provided good value already in this league: Yasiel Puig, Brandon Inge, Edward Mujica, Tony Cingrani, Evan Gattis, Jose Fernandez, Marlon Byrd, Mike Leake, Scott Feldman, Nolan Arenado.

Losing Stanton led to picking up Marcell Ozuna, who has been hitting for a high average since coming up. Failing to draft enough value at 3B or CI led to picking up Derek Dietrich and Juan Uribe, both of whom are providing net positive value for the season for me. That said, the lineup still doesn't look great: 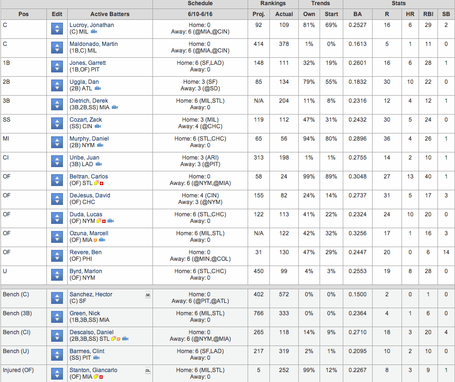 So how does it actually look?

Almost beyond belief, this team is not failing miserably, and while they aren't likely to really make a push for the top of the standings, they've performed better than expected:

Somehow, they're not doing so bad. And it's almost entirely carried on the offense which has been missing Giancarlo Stanton for more than half of the games played so far. Time will tell if there is further improvement, but at this point the pitching staff is held together with duct tape, bubble gum, and hope: 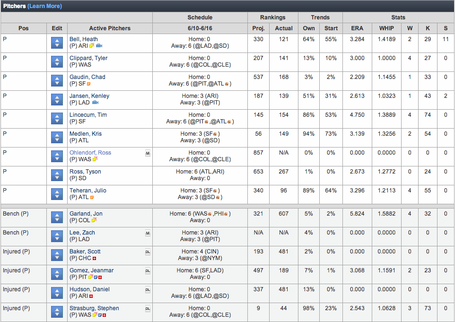 Realistically, a trade needs to be made to get either some pitching help or slightly better production at CI/3B. When Stanton returns, I probably have one too many outfielders and should probably try to move one of them. Thoughts on how this has gone, and what move you might make to try and improve this team?