I was one of the worst teams in my league and decided to use our own managing editors top 200 list for my draft. Things are starting to turnaround...

Before the season started, I wrote in this article that I was faced with the dilemma of another season in a keeper league that had yielded me only one playoff appearance in over ten years. I'm not the Cubs, I'm not the Astros, I'm not the Pirates, the Royals, the Mariners, or Rays -- Those teams have had some success at some point.

I'm more like Joe Estevez, brother of Martin Sheen, uncle of Charlie and Emilio, 243 acting credits and not a damn one is good. (Okay, Soultaker and Werewolf if you watch the MST3K versions are amazing.) Well, with the help of Ray's Fake Teams Top 200 rankings pre-season, I decided I would turn myself from Joe Estevez to Emilio Estevez.

I'm Team USA and I'm goin' all the way. Or at least, to riding on someone else's coat tails!!!

Some principles that I've lived by this season are patience and understanding, much like a caring parent. These are my babies and I want them to grow into something much better and become the playoff-caliber team I know that they can be. I also just don't have as much time anymore, so they'll get the love and affection that I can afford to give them damn it.

And they're lucky because some of these guys are sucking hard on the teet.

The most difficult thing in the early going has been the struggles of BJ Upton, Giancarlo Stanton, Jason Heyward, Miguel Montero, Rickie Weeks, Danny Espinosa, *pauses to drink a slurpee*, and Brandon McCarthy. Plus whatever suckers I have dropped, like Dustin Ackley, but in actuality I've made less than ten moves this year. It used to be that I'd make ten moves a day, like I was makin' moves on a sweet lady, but I can't do that anymore. Plus unlike a sweet lady that I make moves on, I was getting screwed.

Now the hard part is overcoming the injury bug. I wanted to keep Sergio Santos around, but I just can't do that anymore. As of Thursday, my DL consists of Stanton, Heyward, Corey Hart, and Aramis Ramirez. Almost nothing I've said about my team so far is good.

And yet, I've just moved into fourth place, which means that I'm competing in May, which never happens.

I'd like to thank keepers Prince Fielder, David Wright, Felix Hernandez, and Yu Darvish for living up to the hype I gave them and believing in them. Not like those jerks Stanton and Heyward, for making me pick up and start David DeJesus and Ichiro. That wasn't in the 2013 brochure!

Below you can see my starting lineup, with stats updated to Wednesday. 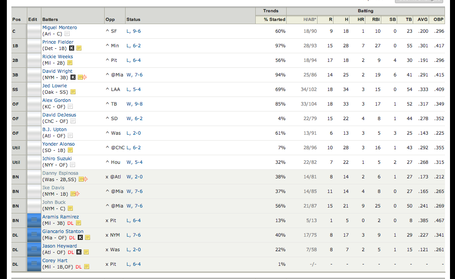 And now you can see my pitching, which is headlined of course by the King and the Samurai Slayer. But thanks to Ray's top 200, I have AJ Burnett, a player I NEVER would have drafted on my own and is absolutely KILLING it in a K/9 league. He used to be NEVER KILLING!

My team is far from perfect. Ike Davis was a pickup that hasn't picked up. Bud Norris and McCarthy don't inspire much confidence either. I have some moves I could make, but I'm not in a rush to do so either. Patience and FakeTeams Top 200 has gotten me further, sadly, than I've ever gone before.