Brian Creagh asks whether Mike Minor can ever be the dominant pitcher that his arsenal suggests he could be.

Mike Minor's lack of sustainable success is one of the more puzzling cases of pitchers with dominant stuff not being able to put it all together. He has a top of the rotation repertoire including a 91-92 mph fastball with good arm-side run, a dominant changeup that keeps hitters off balance, a plus curveball with late bite, and a slider that can get flat at times, but also flashes plus on occasion. All of this coming from a 6'4", left-handed frame and you would expect Minor to be a Top 20 pitcher as he enters only his age 25 season. Instead Yahoo! ranked Minor as their 39th overall pitcher and I have him at 49th in my Week 1 Rankings. So what's holding Mike Minor back from taking the next step? I took a look at his most recent start against the Chicago Cubs on April 5th , where he was the dominant pitcher I would expect to see, and tried to determine if this success is sustainable.

I'll admit that this start probably isn't the greatest sample to draw from because Minor is the type of pitcher the Cubs will struggle the most against this year. Rizzo is arguably the Cubs greatest power threat and as a lefty, he is a bit neutralized when going up against the southpaw (Rizzo bats a career .194 vs. lefties). Soriano just feasts on fastballs and since Minor doesn't rely heavily on his fastball, he can get around Soriano with his plus change and curveball. This leaves Starlin Castro as the only viable threat in the Cubs lineup, unless Dave Sappelt, Scott Hairston, Welington Castillo, or Brent Lillibridge strike fear in your heart (as a Cubs fan I'm embarrassed).

So we've established that Minor was primed for success before he even step foot on the mound, but he delivered and even exceeded expectations in his 7.1 innings pitched, 7 K's, and 0 BB's. He struck out Rizzo 3 times, shoved fastballs down Brent Lillibridge's throat in the third inning, which ended up as the only at-bat in the ballgame where the batter was able to get a three-ball count on Minor. Quite impressive. Minor only made two mistakes all night and surprise, surprise they happened on hanging sliders that Scott Hairston took yard and Alberto Gonzalez crushed for a double to left. He retained confidence in his slider as he used it to K Rizzo later in the game, and it's important he continues to trust his pitches when they fail him otherwise he becomes too predictable as games wear on.

Mike Minor ended up getting pulled after his 84th pitch of the night was lined for a single by pinch-hitter Dioneer Navarro. It might seem surprising to see Minor get pulled after shoving it for 84 pitches and Alberto Gonzalez and Luis Valbuena due up next for the Cubs, but I thought it was a good move by Fredi Gonzalez. Minor's stuff was not nearly as sharp in the 8th inning. His fastball was coming in at 88-89 mph his curveball was getting loopy and didn't have the late, sharp break he exhibited earlier in the ballgame. The move still seemed a bit out of the ordinary as Chip Caray was quoting the Braves manager, explaining that the Braves pitchers were going to be allowed to go around 100 pitches in their first few starts. I decided to look into Minor's career numbers to see if there was something more to pulling him early. I found something interesting:

The table shows Minor's career numbers by innings and this seems to tell a story very consistent with Fredi's decision. Minor really seems to struggle as the game wears on. I couldn't find velocity readings by inning for Mike Minor's career, but the small sample I witnessed Friday night seems to tell the same story. Mike Minor is excellent for the first 5, sometimes 6 innings, but can't seem to maintain his stuff for the entire game. This is a problem. Luckily, judging by Fredi Gonzalez's decision last night, it's a problem the Braves are very much aware of and should help keep Mike Minor's fantasy value at a maximum. What intrigues me is whether or not this is a correctable problem for Mike Minor. Can he ever be a top of the rotation arm capable of going 7-8 innings on a consistent basis?

My guess is that he can fix it, and I draw that conclusion from the following graph: 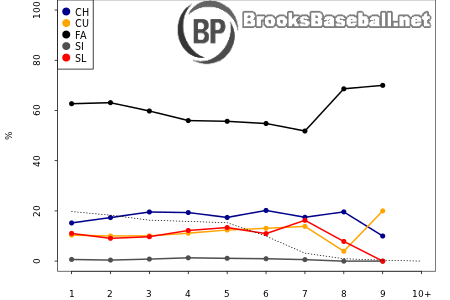 The 8th and 9th innings are just noise in the data since he's only thrown 3.1 innings in the 8th, but Mike Minor appears to be relying less on his fastball as the game goes on. He's also throwing more sliders as the game progresses, which is the worst pitch in his arsenal. His fastball isn't dominant, but it's necessary to help him leverage his plus change-up. He throws a solid mix of pitches in the first few innings, so he doesn't have to vary that distribution much to keep hitters guessing. If he can continue using his fastball to set up his changeup and curveball, I think we see Mike Minor take a huge step forward this year.

I like Minor in all formats this year and would suggest acquiring him when possible. He has a superb outfield playing behind him, and a sorcerer with the glove at shortstop in Andrelton Simmons. It appears the Braves are very much aware of Minor's late-inning struggles and because of that, I would expect far fewer starts where Minor has a blow-up inning and ends up killing your ERA and WHIP.