Streamer purists understand that on a one-game basis, the offense a pitcher is facing is undoubtedly the most important variable in the strategy's success. The pitcher's talent for retiring hitters, the ballpark, the offense supporting the pitcher are all inferior inputs when trying to predict the outcome of tomorrow's start.

The matrix shown below is my favorite tool to use when compiling my rankings. It plots each team's logo on a matrix with the team's combined K% and number of runs scored. The "Streaming Sweet Spot" is in the upper left-hand corner where teams with the least amount of runs and the most amount of strikeouts are placed. Picking guys slated to go against these teams are your best bets for streaming options. Let's take a look at how the matrix looks currently: 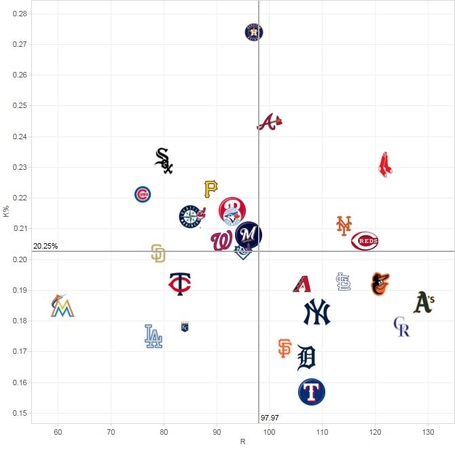 The data is as of 4:00 CDT on Sunday. Some of the logos re-sized differently, but every team is placed on this matrix.

I plan to include this chart (and will work on re-sizing the logos) on every edition of the Complete SP Ranks so that you can make your own educated decisions about who to stream. I'm interested in hearing feedback regarding the statistics used. Does anyone think there are better stats to use when projecting streamers on a one-game basis?
Follow me on Twitter @BrianCreagh