Prospect How To: The 20-80 Scale for Hitters

In our last Prospect How To, we talked about the five tools for position players. Today, we put some context to the grades for each of the fantasy relevant tools.

Share All sharing options for: Prospect How To: The 20-80 Scale for Hitters

If you have read any of the prospect articles here at Fake Teams, you have probably noticed that we frequently talk about grades of tools for Minor League players. When we refer to grades, we are using the 20-80 scouting scale that was developed by Hall of Famer Branch Rickey 60 years ago. The scale, while possibly confusing at first, actually is set up so that a 50-grade is league average and each incremental grade is a standard deviation away from the mean.

Prefer sabermetric stats? Check out this Fangraphs article on the 20-80 scale done saber-style.

Many people think that "average" is a subjective term for scouts, but the reality is that it's not. When a tool is deemed to be a 50, it is because the expected future output falls within the league average* for the related metric. If that sounds confusing, it should make sense when we get to some actual examples.

In the following tables, the ranges refer to full season values (say about 600 at bats). Now without further ado,, let's take a look at what the scouting scale numbers really mean.

Present grade in hitting ability is based on a mechanical evaluation, not a current performance at the Major League level.

Future grade in hitting ability is a projection of the player's potential as a hitter at the Major League level in terms of batting average.

It makes sense that the hit tool relates directly to batting average, as we traditionally award the batting title to the player with the highest batting average. As you can see below, though, batting average across the Major Leagues has been dropping over the last few seasons. 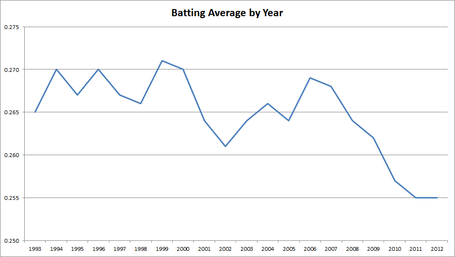 Now, what do scouts look for when projecting future batting average totals? Evaluators want to see hitters that have strength, bat speed, confidence at the plate, an aggressive and balanced approach, a direct line from the bat to the baseball, and an ability to recognize offspeed pitches. There are also flags to watch for such as a hitch, a bat wrap, a dead bat, head pulling, and fear at the plate.

Taking all of that into account, hitters are graded based on the following ranges:

Again, let's start with the MLBSB definition for power:

Present grade in power is based on a mechanical evaluation and raw strength, not a current performance at the Major League level.

Future grade in power is a projection of the player's potential as a home run hitter at the Major League level.

Power is quite possibly the most sought after tool in the game, especially the usable in-game power we are talking about. While there aren't many 80-grade power players, many of the game's top sluggers do have plus or even plus-plus power. And you'll notice the only players that can thrive in the league with very little power either have great speed or are plus defenders.

When grading future power potential, scouts watch for strength, bat speed, full arm extension through the baseball, and for the baseball to jump of the player's bat. If you've attended many games live, you know that the ball sounds differently coming off of some player's bats. That is the type of thing that separates elite talents.

As I've mentioned previously, running speed is one of the easiest tools to measure because it is done with a stop watch. The present grade for a prospect's speed is based strictly off of their times from home to first. League average time (so 50-grade) is 4.3 seconds for a right-handed hitter and 4.2 seconds for a lefty since they are slightly closer to first to start. 80 runners get down the line in 3.9-4.0 seconds depending on handedness. To give you some context on how fast Reds' prospect Billy Hamilton is, he has typically been clocked in the 3.35-3.45 range, essentially breaking the scouting scale for speed.

Future projection is also based on these speeds, but also how well they will translate to other areas of the game such as stealing bases and tracking down fly balls in the outfield. While speed is a large part of stolen bases, some players can rack up decent steal totals without blazing speed. Below you will see the 20-80 scale using stolen base totals, rather than the traditional times.

*League average was determined by using the average for qualified hitters between 2010-2012.

To read more on the scouting scale and everything prospect-related, check out Minor League Ball.